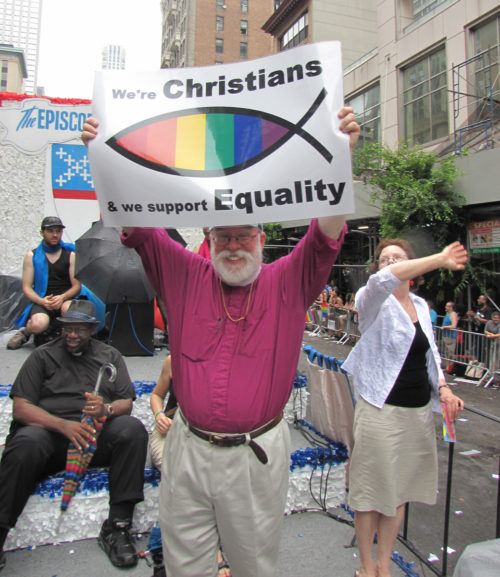 [Episcopal News Service] Steve Price’s white gardenia boutonniere and diamond pinkie ring were bittersweet tributes among a sea of joy at the June 27 “Celebration of Equality” at St. John’s Pro-Cathedral in Los Angeles.

From Los Angeles to New York, worshippers gathered across the church to celebrate in very public and very personal ways, after the U.S. Supreme Court struck down the federal Defense of Marriage Act (DOMA) and ruled California’s ban on gay marriage (Proposition 8) unconstitutional.

The court’s decisions extended many previously denied federal benefits to same-sex couples married in the U.S. states that allow such unions and paved the way for gay marriages to resume in California.

“I’ve been fighting this fight for 30 years,” said Price, a co-founder of the Holy Spirit emerging Episcopal community in Silver Lake, California.

While celebrating being able to “experience God’s love at this moment with one another,” Price said his gardenia was a tribute to “the ghosts of all those people who didn’t make it to the finish line.” The diamond was a family heirloom he made into a pinkie ring. It would have been a wedding ring, but his partner “died of AIDS; he’s not here for this.”

Others at the celebration wore gay pride t-shirts bearing the familiar slogan: “The Episcopal Church welcomes you.”

Diocese of Los Angeles Bishop Suffragan Mary Glasspool sparked exuberant cheers and sustained thunderous applause among about two hundred worshippers at the June 27 Los Angeles service with just her opening remark: “A lot has happened this past week.”

“It is interesting to note how much does seem to happen in late June,” added Glasspool, who in 2009 became the first openly gay, partnered female priest to be elected a bishop in the Episcopal Church.

And “June 24, was the 40th anniversary of the UpStairs Lounge arson attack in New Orleans, which killed 32 people and elicited remarkable little attention at the time and an even shameful lack of response from anyone in authority, including leaders of religious institutions,” added Glasspool.

She told the joyous gathering that she chose one of the evening’s lessons (Romans 8:35-39) “because it was the one piece of Scripture that kept me in the church when I was working through my own sexuality and thought maybe God hated me because I was a lesbian,” she said.

But she added that, if given the opportunity again she might have chosen the Parable of the Laborers in the Vineyard (Matthew 20:1-16) instead because it says “something about God’s overwhelming grace given to everyone who will receive it, and our human and many times destructive difficulty in celebrating the gifts that another receives, in celebrating our diversity.”

She challenged the gathering to move from “equality to solidarity,” learning to authentically rejoice in the gifts others receive. “How can we work together to further the reign of God?”

The United States was also celebrating Gay Pride Week and in many places, many celebrations of the week and the court rulings became one. 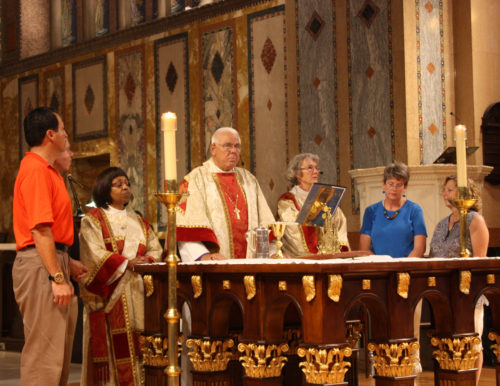 Bishop J. Jon Bruno of the Diocese of Los Angeles, assisted by deacon Margaret McCauley and Archdeacon Joanne Leslie, celebrates Eucharist flanked by two LGBT couples at a “celebration of equality” service at the Pro-Cathedral of St. John on June 27. Photo: Janet Kawamoto

In New York City, more than 100 people began the day worshiping at the annual disco Pride Mass at St. Mark’s Church-in-the-Bowery. The service started with a rainbow-clad Earl Giaquinto singing “Over the Rainbow” and ended with dancing beneath a strobe light and colored spotlights.

With live music quietly playing behind her, the Rev. Stephanie Spellers, canon for missional vitality for the Diocese of Long Island, celebrated the Eucharist wearing the green chasuble of retired Massachusetts Bishop Suffragan Barbara Harris, the first woman ordained bishop in the Anglican Communion.

The day’s second reading was an excerpt from the Supreme Court ruling overturning parts of DOMA.

“We have a lot to celebrate today,” the Rev. Winnie Varghese, St. Mark’s rector, said in her sermon. “When government acts on behalf of people, it feels like liberation.”

When Jesus set his face for Jerusalem, he headed toward the center of power, just as prophets like Elisha did to “proclaim what is right in the cities of the king,” she said. Varghese urged worshippers to celebrate but also to continue that prophetic role in pushing for rights for all people. 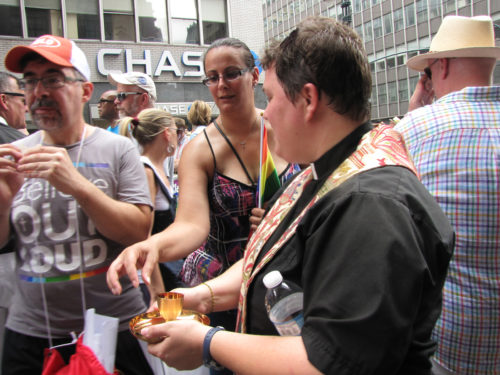 The Rev. Megan Sanders, interim rector at the Church of St. Andrew on Staten Island, distributes communion June 30 at a Eucharist offered by the NYC Metro Chapter of Integrity for Pride Parade marchers unable to attend church before the event along Fifth Avenue. Photo:Sharon Sheridan/Episcopal News Service

On Manhattan’s 38th Street, the Rev. Megan Sanders, interim rector at the Church of St. Andrew on Staten Island, celebrated a Eucharist planned by the NYC Metro Chapter of Integrity for marchers unable to attend church before the parade along Fifth Avenue. Sanders, who recently married Kristin Robyn, said she “cried in my car all the way to work” when she heard about the Supreme Court ruling. “I was so excited, but also unsure of what this means and how do we protect people who aren’t married.”

In the parade, Episcopalians from the dioceses of New York and Newark marched carrying church banners in front of a float. New York Bishop Andrew M.L. Dietsche and his wife Margaret waved from the float to crowds lining city streets, who were dancing to the float’s music and cheering. One male couple stood, dressed in white, beneath a sign saying “Just married today.” One of the grooms mouthed the words “thank you” as the float passed. At several spots, including the Episcopal Church of the Ascension, volunteers handed out water to marchers.

“I’m happy to be here,” Dietsche said, noting the diocese’s support for marriage equality and full inclusion of LGBT people within the church. “I think that people are feeling a new day in America, and we just hope to be part of it and celebrate.”

After the parade, Dietsche participated in and spoke briefly at a Pride Evensong at St. Luke in the Fields.

“We are witnessing as people of faith a monumental shift in the hearts and minds of people … at an astonishing speed,” he said.

The church’s parade float is “enormously important,” he added. “It says the Episcopal Church welcomes you, and that’s a message that is extremely important for the church to express in the LGBT community, because it didn’t always. Maybe we’re beginning to heal some of the damage that has been done in the past by the church.”

The Rev. Barbara Lundblad, Lutheran pastor and preaching professor at Union Theological Seminary, preached on Luke’s Gospel of the widow and the unjust judge. 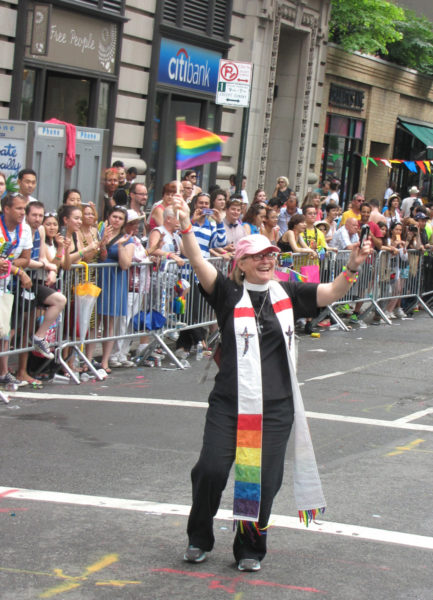 Wearing a stole she made for officiating at her first gay wedding, the Rev. Susan Copley, rector of Christ Episcopal Church and San Marcos Mission in Tarrytown, New York, marches in the New York Pride Parade on June 30. Photo:Sharon Sheridan/Episcopal News Service

A June 26 evening celebration at Washington National Cathedral “was a joyful night, full of laughter and tears as those who had suffered so much discrimination savored a cultural and legal turning point in our shared march toward justice,” said the Very Rev. Gary Hall, dean, in a June 30 sermon.

The cathedral bells had pealed at noon “as a sign of unity with the LGBT community,” according to a cathedral press release. Hundreds of people gathered at the cathedral to celebrate the Supreme Court decisions.

More than one hundred people attended a June 27 “nuts and bolts” forum at St. Margaret’s Church in Palm Desert, California, in the Diocese of San Diego, according to the Rev. Lane Hensley, rector.

Hensley, who said he is scheduled to officiate at a same-sex wedding in September, said the forum was intended to begin a conversation about the practicalities of living into the court’s decisions.

On the day of the Supreme Court’s decisions, Andrus wrote on his blog that being at San Francisco City early that morning to await the announcement from Washington, D.C. “with the statue and spirit of martyred San Francisco supervisor Harvey Milk looking down on us as current Board of Supervisors President David Chiu noted, was to be grateful for the work, witness, and sacrifice of all those present, all those in many other places, and those whose work provided the base upon which we now stand.”

–The Rev. Pat McCaughan and Sharon Sheridan are correspondents for the Episcopal News Service.