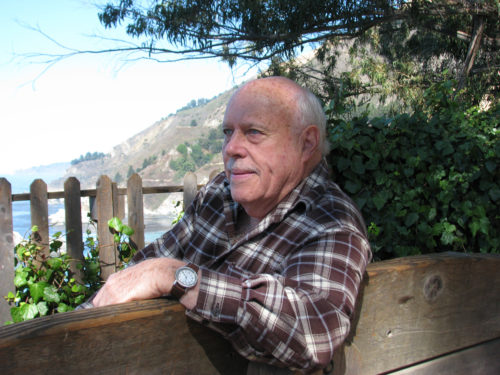 [The Episcopal News, Diocese of Los Angeles] These days, the Rev. Canon Malcolm Boyd prefers quiet revolutions to the public upheavals that have distinguished his life and times for decades.

The Hollywood executive turned Episcopal priest, Freedom Rider, anti-war and gay rights activist, author, playwright, social critic and church revivalist will be 90 on June 8 and has been busy being filmed for a documentary about his life.

“This is the first time anyone has made a film of my life,” he chuckled during a recent telephone interview from his Los Angeles-area home, adding: “I just show up and I’m filmed.” 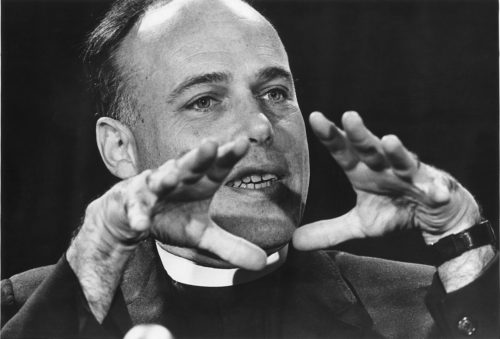 Perhaps best known for Are You Running with Me, Jesus? “a little book of prayers” he wrote in 1965, Boyd still is working, both as writer-in-residence of the Episcopal Diocese of Los Angeles and as a regular columnist for the Huffington Post, exploring issues of life, death and aging gracefully, with his characteristic sense of humor.

Like a recent column about attempts to renew his driver’s license that ultimately yielded the desired result.

Despite his advanced age, “Retirement wasn’t a reality, obviously. It’s kind of a process,” Boyd said. So is reflection, and the documentary undertaking by the award-winning Thomas has offered ample opportunity for that.

“Malcolm and Mark (Thompson, an author and Boyd’s partner of 30 years) and I went to Grace Cathedral and walked the labyrinth. He spoke at some events,” Thomas said during a recent telephone interview. “We’ve done four interviews with Malcolm so far; we just sit in a room quietly and we don’t deal with questions; we deal with themes and see where it takes us.

“Malcolm has forgotten more than I’ll ever learn,” added Thomas, who hopes to complete the film in time for a fall release. Thomas has written, produced and/or directed highly acclaimed episodes of such TV series as “COPS” and “Modern Marvels.” He has received several Emmy award nominations for work on the History Channel, A&E, Discovery and the Sci-Fi Channel. His 2009 film “The Anatomy of Vince Guaraldi” about the jazz great has accumulated five film festival Best Documentary awards.

Ironically, it was that film which led him to Boyd, he said.

“Guaraldi composed ‘Cast Your Fate to the Wind’ and the music for ‘Peanuts’ and I realized that Malcolm worked with Vince twice in his life,” Thomas recalled. “[Vince] composed all the music for the very first jazz mass at Grace Cathedral and Malcolm did the sermon and then a month later, Malcolm did a series of performances at the hungry i [a café in San Francisco],” he recalled.

After some initial checking, Thomas discovered Boyd was alive and well and “living about two miles from me,” the filmmaker recalled. “It was a wonderful, serendipitous moment to know that one of your heroes is still alive.”

Even more serendipitous has been his discovery of historical “reel to reel” film footage of Boyd and other unpublished materials, along with interviews of people from seminal moments in Boyd’s life.

Like a conversation with Penny Liuzzo, daughter of Detroit homemaker Viola Liuzzo, who was part of a group that met weekly at Boyd’s apartment during his Wayne State University chaplaincy days. Viola Liuzzo was so inspired by Boyd’s civil rights activism she left home and family to work for voter rights. She was murdered on March 25, 1965, the last night of the Selma, Alabama, voting rights march.

And like Woody King Jr., “the great actor who worked with Malcolm on ‘A Study in Color’ and ‘Boy’ and a lot of those somewhat subversive plays Malcolm did about racism back in the early 1960s,” Thomas said.

“[King] said Malcolm would never bring up religion or Christianity … but after working with him for a few weeks, they all realized they were inspired to go back to the word.

“[Malcolm] inspires people to go on their own journey,” Thomas said. “It reminded me of the time we were taking a walk and Malcolm said, ‘the point here is not to spend your life looking for God but to allow God to find you.’ It’s typical of his way of twisting the traditional mundane approach to life and trying on a different hat and looking at it from a new perspective.

“It’s part of his incredible deep well of empathy. That’s just who Malcolm is.”

Boyd was born in Buffalo, New York on June 8, 1923 to fashion model Beatrice Lowrie and financier Melville Boyd, “an alcoholic and womanizer. I later understood him and conducted his burial service. His father was an Episcopal priest, but he died so young,” Boyd said.

After his parents divorced in the 1930s, Boyd and his mother moved to Colorado. He survived bouts of atheism during his undergraduate college years, and made his way to Hollywood where he worked as a junior producer before entering seminary in 1951.

He was ordained to the priesthood in 1955 and after extended studies, became Colorado State University chaplain four years later. There he was dubbed the “espresso priest” for his talks given in coffee houses and bars.

He has written more than 30 books and is considered an icon for righteous social struggle and a hero to many, including author Nora Gallagher and gay rights activist the Rev. Susan Russell.

“There are so many things I could say about Malcolm Boyd as a trailblazer, truth-teller, and courageous witness to the power of God’s inclusive love,” said Russell, a blogger, Huffington Post contributor and senior associate at All Saints Church in Pasadena.

“It is no exaggeration to say that his Are You Running With Me, Jesus? fed the hunger of a generation of people who had given up on the church or anyone connected with it having anything relevant to say. His willingness to put his faith into action by marching in Selma to end segregation was a powerful witness to what former Presiding Bishop John Hines called ‘justice as the corporate face of God’s love,’” Russell said via e-mail.

“And his example as an out-gay priest in a time when such a thing was practically unimaginable was – and continues to be – an inspiration to all who work for the full inclusion of LGBT people in this church and in this country,” added Russell, a gay rights activist.

Gallagher, a parishioner at Trinity Episcopal Church in Santa Barbara and author of “Moonlight Sonata at the Mayo Clinic” (Alfred P. Knopf, 2013) said in the foreword of a reprinted version of Running that Boyd’s famous book of prayers “made it possible for me to imagine a church that had something to do with what was happening in the world, to see that the work of the faithful is to expose injustice.”

Yet, Boyd is reluctant to take credit for being an icon for social justice for many, or even a hero to some.

He does acknowledge sacrificing personal privacy for public persona, for “belonging to the church” even as early on as 1951, when he dissolved his partnership with Hollywood stars Mary Pickford and Buddy Rogers to enter the Church Divinity School of the Pacific in Berkeley, California. 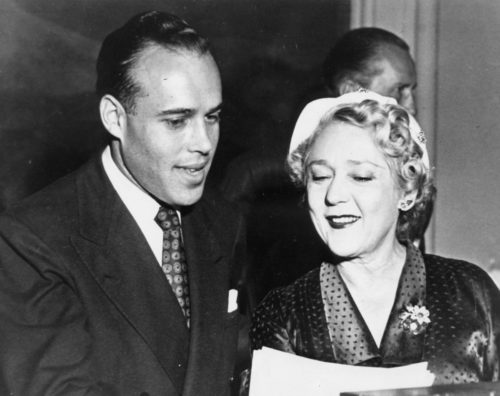 In the 1940s, Malcolm Boyd was a business partner of film star Mary Pickford before he departed the Hollywood scene in 1951 to attend Church Divinity School of the Pacific.

Again, with characteristic humor, he quipped that at his going-away party “with a lot of celebrities, gossip columnist Hedda Hopper said that everyone, including the bartender, bowed their heads for the Lord’s Prayer.”

But “it was all new ground,” he said recalling tumultuous decades of his life. “I had no textbook. What happened came out of a very strong sense of responsibility because I realized that I was speaking for a number of other people who did not have a voice.”

It meant frequently running afoul of authorities, both church and civic. While Boyd was serving as Colorado State University chaplain, students flocked to his coffeehouse campus ministry but “the bishop, without coming to look at the work, characterized it as “beatnik” and said, “you can’t call yourself a beloved child of God if you have matted hair, smell badly or wear black underwear.”

“To me, this was blasphemy,” Boyd recalled.

He moved on, invited by then-bishop of Michigan Richard Emrich to serve as Wayne State University chaplain in Detroit. His activism in full swing, he demonstrated with the likes of Martin Luther King Jr. and Stokely Carmichael and the Student Nonviolent Coordinating Committee as well as Jonathan Daniels, an Episcopal seminarian who was murdered in Selma, Alabama in August 1965 by white supremacists.

“I was involved in an enveloping process,” Boyd said.

“The summer of ’65 was the hardest,” he said, recalling his own harrowing close calls with white supremacists and feelings of alienation and fear.

In 1977, he came out as gay. “At this point, you could throw your hands up and scream, because what do you do with a story like this?” he said, laughing. “Here’s Malcolm Boyd, with all of this — terribly controversial — and now on top of everything, he’s a queer?” 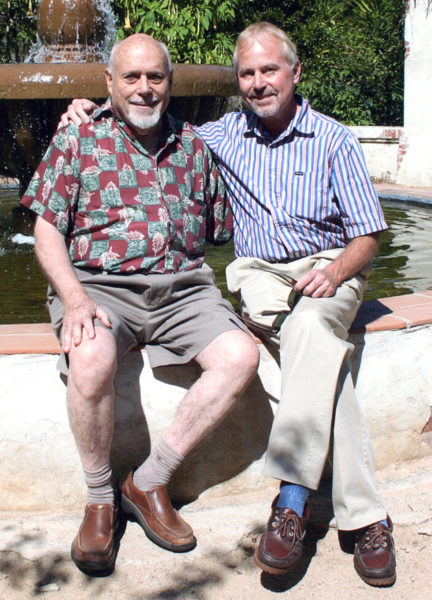 Malcolm Boyd and author Mark Thompson have been a couple for 30 years. Photo/Mary Glasspool

Back in Los Angeles, he served local parishes, continued writing and public speaking engagements and met author and photographer Mark Thompson, his life partner of 30 years.

He now considers himself an elder and his life “an odd story, to put it mildly. It was quite a lot to live through, so I’m grateful to anybody who helped — and a number of people did.”

Aging and the prospect of turning 90 brings yet new “surprises. It’s like being on the Titanic. You’re out there on the ocean and somebody spots an iceberg. It ain’t going away.”

He added that: “Wouldn’t it be great if all of us — you and I, for instance — might take ourselves a wee bit less seriously?

All kidding aside, he still accepts occasional preaching and speaking engagements and is spiritual director to about a dozen people. Always the activist, he adds: “I accept myself as an elder. I think elders need to analyze their own position in society and in some cases argue with society about what their position is because I think there’s all sorts of stereotypes about elderly people right now.”

Perhaps his own experiences could still serve as a primer for the church: “There’s too much talk about the future of the church and meetings and discussions,” he said. “If you have faith, the main thing now is to move, one foot ahead of another, and to trust in God.”

As always, Boyd looks to the future with hope, adding: “Let’s do this again in 10 years.”