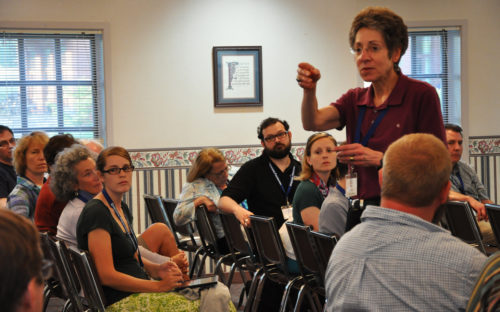 [Episcopal News Service, Richmond, Virginia] A celebration to honor the first 25 years of the Episcopal Preaching Foundation began with a memory that pointed to the future.

The Rev. Brent Norris, the rector of St. Mary’s Church in Asheville, North Carolina, recalled coming to the foundation’s annual Preaching Excellence Program (PEP) in 1995 and receiving “a brilliant, white-hot passion for preaching in the parish and what the word of God delivered in faithfulness to God’s people could do, and what place that might ought have in my ministry.”

Norris, speaking at a banquet May 30 during this year’s PEP gathering, recalled that the Rev. Jane Sigloh, a PEP faculty member in 1995, sparked in him “a love and passion for parochial preaching – preaching to the people God has entrusted to you on a weekly basis.”

“I hope that you can be instilled with that passion too and that it can become white-hot and burning in you so that at some point you pass that spark of passion on to someone else,” Norris, who was on staff for this year’s gathering, told the 44 rising senior seminarians and recently graduated seminarians who were among those attending the banquet.

And Annie Pierpoint, a seminarian at Virginia Theological Seminary, replied during the tributes that she was indeed “white-hot with passion for preaching.”

“We have been given a gift, us seminarians, this week,” she said. “And this gift that we have received is a gift that we will not hold on to very long. It is a gift that is going to go directly from our mouths into the ears and the hearts and the souls of the people we preach to throughout our careers.”

The foundation’s aim is to encourage and enhance preaching in the Episcopal Church. For years, its annual centerpiece was the Preaching Excellence Program. This year’s participants gathered at the Diocese of Virginia’s Roslyn Conference and Retreat Center May 26-31, working with their peers, preaching professors and parish priests. They preached and received feedback about their own preaching, and listened to others preach. They also attended workshops and large-group presentations on preaching topics.

Presiding Bishop Katharine Jefferts Schori, who was a PEP participant in 1993, held two question-and-answer sessions with the participants on May 29 and 30, and spoke about the changing nature of preaching. She also presided and preached during Eucharist on May 30. 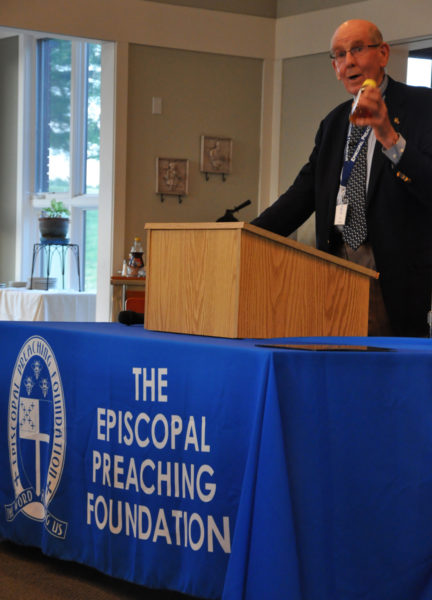 The banquet during which Norris and Pierpoint were among the speakers was also meant to honor A. Gary Shilling who began the Episcopal Preaching Foundation in 1987 because he was convinced that excellent preaching is a key to engaging all of the church’s members, but especially those who were relatively uninvolved.

His aim was to improve preaching in the Episcopal Church by offering seminarians an immersion experience in the art and practice of preaching. The foundation has sponsored the annual tuition-free program since 1988. Approximately 1,200 Episcopal clergy have participated in the program while they were in seminary. Participants are nominated by their seminaries.

“The astonishing thing to lots and lots of people is that it’s a lay person who cares so much about preaching in the Episcopal Church that he has kept this baby going through thick and thin,” the Rev. William F. Brosend, the foundation’s executive director and homiletics professor at the University of the South’s School of Theology, said during the recent PEP gathering.

Shilling, founder of an investment advisory firm, attends Christ Church in Short Hills, New Jersey. He has also served at the local, diocesan and churchwide level.

“If there is a force of nature in the Episcopal Church more determined and committed to his vision than Gary Shilling, I don’t know who she or he is,” Brosend said while introducing Shilling at the banquet. Shilling, he said, “has kept before our eyes the importance, the centrality, the incredible potential of powerful, committed, eloquent preaching.”

Since 2009, the foundation has expanded its support of Episcopal Church preachers by offering national and regional conferences for lay and ordained preachers. Close to 1,500 clergy have attended one or more of these events. New programs, such as conferences on preaching for military chaplains, peer-mentoring and evaluation programs, and programs for those preaching in Spanish are planned in the next three years.

The church needs strong preaching, Virginia Bishop Shannon Johnston said during the banquet  “because Luther was right: there is something sacramental about the preaching of the word.”

The Rev. Hope Eakins, one who Brosend said was among those who were “present at the creation” of the PEP sessions, told the banquet participants that “the one thing that has always been true at a PEP conference is that we have proclaimed hope.”

“We’ve grown over the years to know that we all in need for learning, that we all can benefit from being in community and listening to each other. And we have hope that we will be able to proclaim the word of God in better and more powerful and stronger voices. We have hope that the complexities and the difficulties and the confusions of the world can be countered be the clear voice from God calling us to a bigger and better vision of what might be.”

Shilling reminded the PEP participants that they have a unique relationship with their congregants during the time they spend in the pulpit. “We have such a rich liturgy that sometimes the sermon gets lost in the shuffle,” he said.

But, he said, “people in the pews do have some interest in what’s going on in the pulpit.”

“Most of all, we want you to improve your preaching. We want you to become dynamite preachers because you are the kind of people who are going to attract a lot of people like me back into the church.”