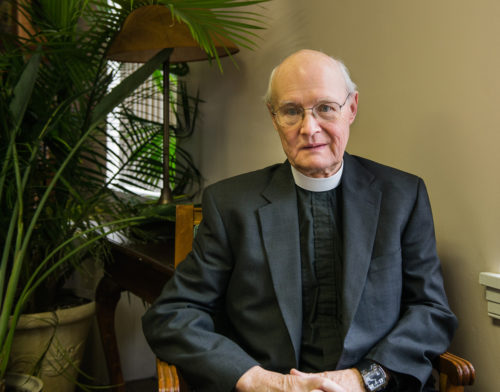 [Episcopal News Service] As the Very Rev. William Lane describes it, the typical Episcopal cathedral is a parish-plus: plus hospitality to the diocese, plus prophetic ministry to the community, plus a showcase for best practices in worship and programs.

Most Episcopal cathedrals, he said, are like those he served: “a combination of parish church with an add-on, and it varies how big that add-on is, I guess, from diocese to diocese … Quite often it’s a focal point for diocesan functions and major functions in the life of the diocese.”

But for those who serve as cathedral rector and dean, as for any other parish priest, “a good chunk of our ministry” focuses on meeting pastoral needs, running the parish and overseeing parish life, education, worship and liturgy, he said. “That pretty much was true in Bethlehem and true here in Delaware.”

Ordained a priest in the Diocese of Maryland in 1964, Lane served both parish and diocesan ministries in Delaware from 1975 until his call to Bethlehem in 1997. He retired in January 2006 and returned to Delaware, becoming cathedral interim dean in June of that year. “I was there as one of the longest interims in the history of the church, I think!”

Nativity was “an active growing parish and not looking over its shoulder at the possibilities of closing,” he recalled. Beyond running a full contingent of parish programs, it hosted most diocesan convocations and renewals of clergy vows and many ordinations.

“Many of those things, of course, involved both diocesan personnel as well as the cathedral personnel,” Lane said. “It was at times demanding, but it was the kind of thing you enjoy doing, and we had good lay leadership at the cathedral to pitch in. … I never felt it as a burden.”

To an extent, St. John mirrored that, he said. “We had good leadership here at St. John. We had a great music program. … Again, it was a joy to be kind of the host for many of the diocesan activities, and the diocese provided a lot of assistance … a lot of the people power.”

The trouble was, there were fewer people. Lane arrived as interim knowing the cathedral might close in two years. Average Sunday attendance was 70 to 90, including the choir, compared to 180 in Bethlehem.

An endowment helped, but the income from it wasn’t enough when the markets dipped, he said. 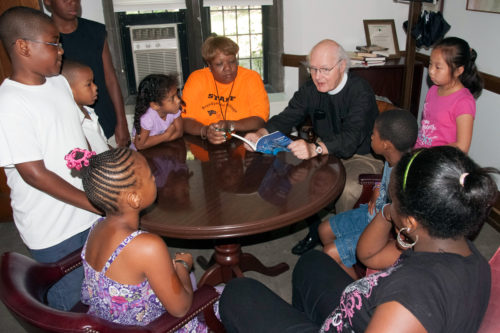 During his six-year tenure, they explored different options for keeping the cathedral open. They spent nearly a year talking with a charter school interested in locating there, “and then at the last minute … the charter school pulled out and found a different location.”

The cathedral’s biggest “outreach and mission ministry” was the choir school, which served at-risk children and included services such as homework help and mentoring as well as musical training. It served, “any given season, anywhere from 25 to 40 children, most of them from the at-risk communities of the city,” Lane said. “We had talked about the possibilities of building out the choir school into a day school.”

But that, too, didn’t pan out.

“We gave it a shot and really worked hard, but in the end, we just couldn’t make it,” Lane said. “Finally, it just became clear that it wasn’t for lack of ministry and a lack of good worship and a lack of all the things you want, it was just a lack of funds, and there wasn’t enough people power there to generate the funds.” And, he said, “The diocese didn’t feel it had the major dollars to put into keeping the cathedral afloat.”

“There was no choice” but to close, he said. “As you can well imagine, it was a time of sorrow.”

In the cathedral’s last months, it held a celebration called “30 and Over” marking the longevity of some parishioners’ time there. When Lane polled those attending on how long they had been at the cathedral, “we had folks who had been there 70 years.”

“For all of them,” he said, the cathedral’s closing “was heart-wrenching.”

“Part of my task, my ministry, was to help folks live through it, not to be in denial about the grief … and to recognize that there’s not only death but resurrection, and we find resurrection sometimes in different places.

“I will never be able to say too strongly how much I admire the people of St. John’s, how they lived through that grieving, but on the whole not letting that grief control their lives and their spiritual lives,” he said. “They could have let bitterness really take hold and control them, and they didn’t.”

Some cathedral members began worshiping at the Church of Saints Andrew and Matthew in Wilmington, where he now is an associate priest. “That’s one of the reasons I came over here, to be with them through a time of transition. Some of them went other places, to other parishes.”

The choir school relocated to Andrew and Matthew and is “still alive and well,” he said.

Offering exemplary programs such as that is part of a cathedral’s role, he said. “I think the cathedral should exercise ministries that set an example and provide a teaching for parishes.”

“On the other hand, it depends on the resources available to the cathedral,” he added, noting that in the Diocese of Delaware “parishes had far more resources in people and finances and clergy staff.”

“In my mind, it doesn’t necessarily mean that because it’s a cathedral church it’s going to always be the prime example of urban ministry or teaching ministry or education, but that is certainly a function that it should strive to,” he said. And whatever it does, it should do everything possible to ensure that “whatever it does, do it very well.”

“A cathedral dean,” he added, “needs to have his or her eye or hand on the pulse of the community.” And the dean must be willing to allow things to take place in a cathedral that a parish might not want, he said. “You need to provide opportunities for controversy to be expressed.”

In Bethlehem, for example, they brought Palestinian and Israeli Jewish activists to preach and teach about issues of Israel and Palestine.

“With a cathedral church, the dean also has to have a pastoral sense,” he said, concluding, “I’m not so sure that a dean is any different than a parish rector. But you definitely have to be open to the ministry of hospitality to the diocese and the ministry of prophetic ministry to the community.”