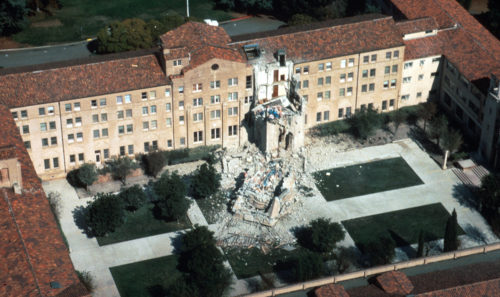 [Episcopal News Service] In the event of earthquake or fires or other disaster, Betsy Eddy will tweet an invitation to San Francisco’s Diamond Heights community, to come to St. Aidan’s Episcopal Church for food and resource information.

It’s just one part of the church’s — and the neighborhood’s — disaster preparedness plan. It makes use of existing resources because “we already have a food pantry every Friday that serves over 100 in our zip code,” said Eddy, a St. Aidan’s parishioner.

“We know there will be a need for food in an emergency situation and we are working with the San Francisco Food Bank so they know we will be a food distribution site in Diamond Heights.”

Collaborating with others in the community is key to the plan — still a work in progress, said Eddy in a recent interview with the Episcopal News Service. She was preparing for an April 24 meeting with the Diamond Heights Disaster Ready Working Group (DRWG), which she and the Rev. Tommy Dillon, St. Aidan’s rector, helped to start about five years ago.

“We’re trying to create this whole network of preparedness and joining together,” she said of DRWG. Its members are neighborhood businesses and organizations that have met regularly since 2008.

“Today we’re talking about our plan to contact people in the neighborhood who want to be contacted, maybe who live alone, have disabilities, an older person who needs somebody to check on them because of chronic disease or because of inability to do the activities of daily living.”

Increasingly, local Episcopal churches and dioceses and, in some cases provinces and even regional entities, are collaborating to prepare for inevitable disasters, according to Katie Mears, director of US Disaster Preparedness and Response for Episcopal Relief & Development.

Reaching out to others in Diamond Heights

St. Aidan’s Church, as much of Diamond Heights, sits “on a hill and we’re in danger of landslides. We also have a very great fire danger because it’s windy here,” said Eddy. “Diamond Heights is a mixed area where we have a few expensive homes but we also have over 600 units of affordable housing which could mean vulnerable residents in the event of a disaster.”

Both she and Dillon knew enough about disasters to know they wanted to be as prepared as possible for the next one, she said.

Prior to moving to San Francisco about six years ago, Dillon had mobilized his Baton Rouge, Louisiana parish to respond in the aftermath of Hurricane Katrina, which in 2005 killed more than 1,800 people and caused an estimated $81 billion in property damage.

Eddy had lived through the Loma Prieta earthquake, a magnitude-6.9 temblor that occurred during the warm-up of the third game of the 1989 Major League Baseball World Series. It killed about 60 people, injured more than 3,700 and left thousands homeless. Although it didn’t directly affect Eddy’s neighborhood “it was enough to scare me,” she said. “There was enough death and destruction that it was pretty scary.”

All of which got them thinking that “people need information on how to prepare” for the inevitable next disaster, she said. Things like “how we meet after a disaster. How do we assess what are the needs. We’re also including all types of disasters, including terrorist and biochemical incidents. We’re planning for neighborhood emergency situations and regional disasters.”

They’ve created a website with resources and on June 6 will meet with local city and human service officials, businesses and residents associations to discuss the draft plan, she said.

“What’s really been important with our core group is, we’ve created such strong bonds with each other that even if the big earthquake hits tomorrow we’re going to be able to work much better together, because we already have that bond and connectedness in the neighborhood,” Eddy said.

On April 25, the Rev. Russ Oeschel, archdeacon and disaster preparedness coordinator for the Episcopal Diocese of Texas, “was getting ready to deploy” members of a diocesan emergency spiritual care team to the city of West, near Waco, where an April 17 fertilizer plant explosion killed 14 people, including 11 first responders.

The team and its members, both clergy and laity, are one aspect of the diocesan disaster preparedness and response plan. They aren’t the “recovery people, but they are in the next wave, whenever it is residents are allowed back into areas damaged, we’re there to provide spiritual care as they begin to assess what’s happened to them.”

About 58 U.S. dioceses have participated since Episcopal Relief & Development began training diocesan disaster coordinators three years ago. Ten additional dioceses will be at upcoming trainings in the next few months, said Mears.

“We mostly work on a diocesan level … to help those being trained to think about what a prepared diocese would look like to them,” Mears said in a recent telephone interview. Episcopal Relief & Development also has disaster preparedness materials and resources available to congregations and dioceses posted on its website.

Training sessions invite participants “to think about the ways we’re gifted, to name those gifts so you know what you bring to the table when a disaster hits” and to realize that even when the media coverage halts, the churches are still there, Mears said. 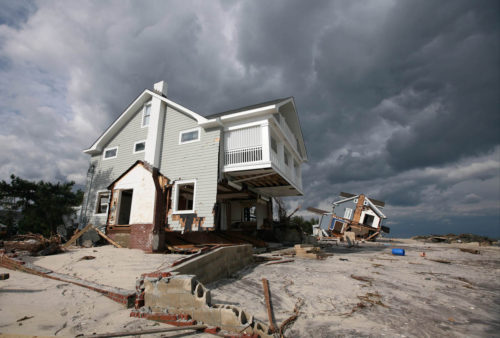 More and more Episcopal Church dioceses and congregations are seeing the value of preparing for inevitable disasters such as Hurricane Sandy. These two Bayhead, New Jersey homes were the 346,000 housing units Sandy destroyed in New Jersey alone the night of Oct. 29, 2012. Photo/Office of Gov. Chris Christie

Mopping up after Hurricane Ike in 2008 and rebuilding after 2011 wildfires “which we’re still working on” was enough to convince the Houston-based Diocese of Texas of the inevitability and complexity of disasters and of the need for flexibility and frequent plan updates, Oeschel said.

When Hurricane Ike’s 120 mile-an-hour winds struck Galveston on Sept. 13, 2008, killing hundreds “probably most of our parishes didn’t have disaster preparedness plans,” Oeschel recalled. But since the 2011 Bastrop County fires “many more churches have started working on them, too.”

Within the last year, the diocese created a disaster preparedness committee that meets regularly to offer education and support to churches. He has also reached out to a network of community agencies in Voluntary Organizations Active in Disasters (VOAD).

At present, the plan is “a basic overarching strategy to ensure that there have been people assigned in parishes that have responsibility for the various areas, like buildings and grounds, liturgical items, a call list and computers because if it’s not thought through first, when a disaster happens, there’s not time,” Oeschel said.

Churches are “sanctuaries of hope in times of disasters,” added Jim Cockey, the current chair of the Easton diocese’s committee. “You’ve gotta have a plan. It may not always work, but you can adapt it as you go.”

The Very Rev. Gary Abbott says he believes that Province IV is the only one of the church’s nine provinces with a preparedness plan and a team available to relieve disaster-weary clergy and to offer spiritual care to their flocks.

The province includes 29 dioceses along the Southeastern United States, from Florida north to Kentucky and west to Mississippi. It is located “in the tornado alleys, where winds blow in off the ocean and wreak havoc with hurricanes,” said Abbott, rector of St. Luke’s, Hawkinsville, Georgia, and the provincial disaster preparedness coordinator since the first of this year.

The committee connects with bishops and dioceses experiencing a disaster.

Episcopal Relief & Development “is the first responder, but we can put a team on the ground in 48 hours, made up of clergy and trained professional counselors,” he said. “We’ll cover that priest’s Sunday services. We can bring in trained counselors who can talk to people within parishes and Province IV will pay those expenses ourselves.”

In another example of building regional networks, the dioceses devastated by Hurricane Sandy, New York, New Jersey, Long Island and Easton in Maryland, are sharing resources during the recovery phase, which will eventually include drafting preparedness plans, according to Keith Adams, New Jersey’s local coordinator.

“Unfortunately, right now I have ten percent of my view on preparedness and 90 percent is on short-term recovery efforts,” he said.

But, he added that, “the regional cooperation is huge. There’s this whole opportunity for communication that has not happened before and when this is over, what’s going to be left behind is this idea that we can all work together.”

Get trained; get a plan

When Judy Stevenson’s West Pittston, Pennsylvania home was flooded in September 2011 “it was a nightmare. I had six feet of water on my first floor.” Her husband Jim, a retired Episcopal priest, was recovering from a 40-day hospitalization and, with advance notice that the Susquehanna River had crested, she needed help packing up to evacuate.

“A lot of people think of what to do afterwards but if we could be prepared beforehand to move things, to pack things, it would help,” said Stevenson, who will return to her home next week.

It’s also important to remember, said Mears, that “the part of the disaster we see in the media is not the part of biggest focus for congregations. Like with Hurricane Sandy, the cameras have long left, but the churches can’t go anywhere. We have to recognize the long arc.”

Adams agreed. “It’s just the world we live in today,” he said. “We have to anticipate that there’s always going to be something. The question is, how can we make connections with communities, with parishes and with dioceses and dioceses with each other and actually be connected to the whole church and respond to people in need. That’s what it’s all about.”