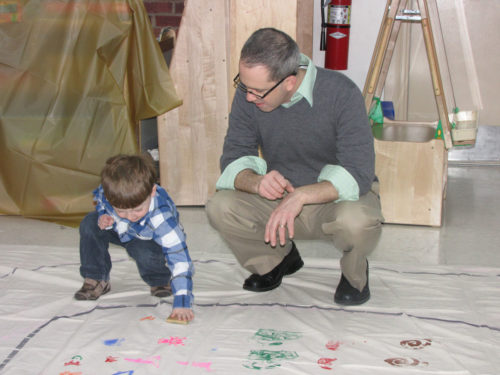 David Joyal and his son, Aidan, stamp patterns on the path of a labyrinth as part of an intergenerational project at St. Peter’s Episcopal Church, Morristown, New Jersey. Photo/Sharon Sheridan

“When I first walked it, it occurred to me that it never helped to look more than one step [ahead],” recalled Wyatt, rector of St. Helena’s Episcopal Church in Burr Ridge, Illinois, which boasts a 30- by 30-foot square labyrinth.

He had another realization: Two people on the path at the same time can offer an important point of reference. And a third: “If you just stay on the path you’ll always get to the center. It’s not a maze, it’s a path to the center and back out to the world.”

Labyrinths may be located indoors or outside and vary in size and shape; besides the prayer paths that people walk, virtual and hand-held versions are available for mini spiritual rejuvenations. The ancient tradition of labyrinths predates Christianity but is enjoying a revived popularity within the Episcopal Church. They mean various things to different people, and each encounter almost always is an intensely personal experience, Wyatt said.

“One way to understand the labyrinth is as a metaphorical journey to the Holy Land,” said Wyatt, who aims to walk one in Wales and another at Our Lady of Reims Cathedral in Reims, France.

“Their origins are lost in the mist of the human past, but it can be seen as a pilgrimage, as a spiritual journey,” he said. “You can walk it to unburden yourself, for purgation, to get to the middle, pause, stand, meditate, so at that point you can unburden yourself and pray for illumination. And, as you walk out, you might pray for unification with God and God’s purpose for you.”

Like Lauren Watson, 8, of St. Peter’s Episcopal Church in Morristown, New Jersey, in the Diocese of Newark, where on March 10 families decorated two labyrinths on 11- by 14-foot canvases. Church members and visitors will be invited to walk the prayer paths on Maundy Thursday as part of their Holy Week journey.

“I think it’s really good, so fun with all the stars and the crazy stuff like the cactus,” said Watson, who helped decorate the labyrinth pathways using acrylic paints and foam stamps in shapes ranging from angels and stars to lions, fish, ladybugs and coyotes. A large A was painted in the center of one, an O in the middle of the other, symbolizing God the Alpha and Omega, the beginning and end.

Gabrielle Seib-Napolitan, 8, said she thought walking the labyrinth would “feel like a rainbow” in her heart. 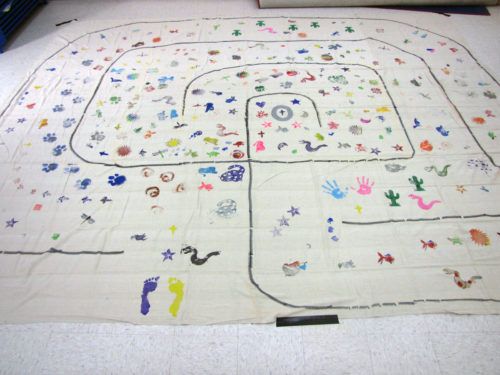 During Lent, members of St. Peter’s Episcopal Church in Morristown, New Jersey, drew two labyrinths on 11- by 14-foot canvas drop cloths, then used foam stamps and acrylic paints to decorate the pathways with images of everything from angels and stars to lions, fish, ladybugs and coyotes. A large A was painted in the center of one, an O in the middle of the other, symbolizing God the Alpha and Omega, the beginning and end. On Maundy Thursday, parishioners will have the opportunity to walk the labyrinths as part of their Holy Week journey. Photo/Sharon Sheridan

The Rev. Melissa Hall, St. Peter’s assistant rector and director of youth education, said teaching children about labyrinths gives them a new way to experience and think about prayer. “We are very hierarchical in our prayer and how we teach children to pray. We always pray up … It’s very reserved. It’s a transcendent God.”

But walking the labyrinth “is very present, internal, personal between you and God,” she said. “You’re looking down as your pray … The words don’t matter. You’re praying with your body.”

It helps adults, too.

When adults first approach a labyrinth and ask what to do, Hall tells them to say the familiar Lord’s Prayer while they’re walking. Invariably, as they move along the path, “they get lost in it,” she said. “They all of a sudden realize they’re not saying anything at all.”

Finding inner peace
Sandy DeGraff had never seen, much less walked, a labyrinth until she left a church office in Johnstown, Pennsylvania, years ago after making burial arrangements for her mother, who had died after a long illness.

DeGraff was grief-stricken and paperwork-weary when she saw the labyrinth. She did what just seemed natural: She stepped out onto its path.

“Ever since, I’ve been a strong labyrinth advocate,” said DeGraff, 67, chair of a committee to build a labyrinth in front of Holy Family Episcopal Church in Fresno, California, in the Diocese of San Joaquin.

“As I started around the labyrinth, I thought about my mother and what we’d just gone through and how important she was to my little family … and about the funeral and everything leading up to this moment,” she said, breaking into tears. “She was a wonderful mother, a wonderful grandmother to my two sons.”

She discovered she was at the labyrinth’s center. “I said a prayer for my mother and a sense of peace washed over me,” she recalled. “It started at the top of my head and came down on me like a shower. I felt it from head to toe, and I knew that it was going to be OK. I said another prayer to God, thanking him for giving her to us.”

On her way out, an idea occurred to her to preserve her mother’s memory by writing a book for subsequent generations. “By the time I finished the labyrinth, I was totally at peace, totally fine,” she said. “It had been difficult, but we made it through. I knew we’d go on, that Mother was still a part of us, and I’ve never stopped having that sense of peace.”

Now she hopes to offer to others similar “pleasant walks with God.” DeGraff regards creating the labyrinth at her church “more for people outside Holy Family than people who are in Holy Family.”

A January fundraiser jump-started the process of raising the $45,000 needed. When completed, the labyrinth will resemble the 11-circuit rosette design of the Chartres Cathedral in France “because it’s so well-known,” said the Rev. Michele Racusin, rector.

“It will be grey and a reddish color. We see it as a tool for evangelism and welcome and prayer,” she said, adding that she hopes to break ground within a few months.

Both Racusin and DeGraff said they believed the labyrinth’s presence would telegraph an invitation to community members to take their own metaphorical journeys. They hope to convey that, while “the church is a sacred space, [it also is] a place of prayer open to the entire community, to anyone who needs it,” DeGraff said.

Personalized construction
Jay and Connie Moody also used the Chartres Cathedral design when they built a labyrinth last September at St. Thomas the Apostle Center in Cody in the Diocese of Wyoming.

They added a personal touch to the construction. “We invited everyone in the diocese to bring rocks for it, so we have a good representation from across the diocese with the stones,” said Jay Moody, 62, resident manager of the 300-acre year-round retreat center.

The result was more than 1,800 stones – each roughly 10 inches wide, a foot high and three inches thick – arranged vertically to form the six-petal rose center design and surrounding circular paths. Gravel fills the areas between the lines.

“We wanted to be able to place the stones deeply enough so they wouldn’t fall over,” Moody said.

“We have a great mix here – sandstones in various colors and also volcanic rock,” said Moody, who walks the labyrinth regularly, weather permitting.

Building the labyrinth was meaningful, he said. “When you’re doing a project like this, it’s a silent time. It gave me an opportunity to connect with this place in a more spiritual way.”

After a contractor leveled the area, approximately 70 feet in diameter, the couple laid the stones.

“We felt the labyrinth would add to the depth of the experience of having a retreat here,” Moody said, “because it really represents what we try to do at the center,” located a short distance from Yellowstone National Park.

“It is really our goal when folks come here that they can leave the busy-ness of their everyday lives behind and are able to quiet their minds and to leave here with more open hearts and a bit more insightful about their own spirituality and a little bit more at peace with their relationship with the world,” he said. “We really feel the labyrinth embodies that.”

It also became an intensely personal experience for him.

“As I laid the stones, I thought about what the pathways really meant as I was building them,” he recalled. “Essentially, you walk the path and are trying to move away, to free yourself from the trials and tribulations and influences of daily life. Many times, I was literally on my hands and knees, praying and placing the rocks.”