[Episcopal Diocese of Texas] Jen Moss and 6-year-old Mia meet every Tuesday for an hour through a program called Kids Hope USA, which matches students with mentors. Together, they read, play games and talk.

An hour a week seems like a small amount of time, but for Mia, it has made a big difference. 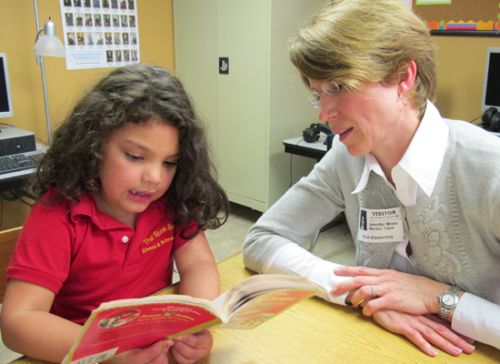 “The Rusk School serves the poorest of the poor,” said Susan Jackson, program director. “Kids Hope matches at-risk kids with mentors. These relationships often have a profound effect on the kids’ in-class behavior and have been statistically proven to change the trajectory of the kids’ test scores.”

“Mia is quite bright,” said Moss, a cathedral member for around 18 months. “She is in kindergarten, and she is probably reading at a third-grade level. But she is not well-behaved in the classroom … She has hit her teacher, and she throws temper tantrums.”

But since beginning the mentoring program, Mia has done better. Since she started receiving the extra attention and moments of guidance, her teachers and parents have reported better behavior.

“It’s not that I have a curriculum on behavior improvement,” Moss said. “It’s just spending one-on-one time with her.”

And Mia looks forward to that hour every week.

“She asks me when I leave if I will be here next Tuesday. She is very concerned that I am always going to come,” Moss said.

On a recent visit, Mia was confronted with the idea of Moss not coming on Tuesdays. “I would just be sad,” she said. “We made a deal that even when I’m in first and second and third grade, she can still come and see me on Tuesdays”

The 6-year-old then gave Moss a special fist bump to seal the deal before reading the next chapter in their book together.

On first glance, one wouldn’t guess that Mia had any troubles at school or elsewhere. A polite, talkative and intelligent girl, Mia already has plans to attend college and become a teacher.

“At first I wanted to be a veterinarian,” she said. “But then they said I had to take care of snakes, and I just didn’t want to do it. I hate snakes! Now I want to be a teacher because I can tell the kids what to do and give them homework. I want to try to teach kindergarten or first grade.”

Mia’s home life is still a bit of a mystery, Moss said, and she is not sure which stories are real or embellished. But Moss understands the constraints of poverty. Although this is her first time mentoring a child, Moss spent two years as a Teach for America corps member, working with lower-income second-graders.

She then went to law school, practiced law, got married and had children. Now that her youngest child has entered pre-kindergarten, she is looking at what to do next.

“For me it is a way to start giving back again,” Moss said. “I like the idea of starting with her as a youngster so I can see the progression.”

If Mia has her way, Moss will see the progress for years to come.

This article first appeared in Christ Church Cathedral’s The Bulletin.