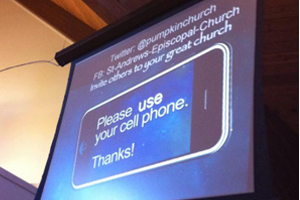 [Episcopal Diocese of Texas] Upon entering a church, we are all accustomed to the signs asking us to turn our cell phones off or on silent, but one church turned that conventional wisdom on its head. On Sunday, leaders at St. Andrew’s, Pearland, asked congregants to “Please use your cell phone.”

For weeks leading up to the event, dubbed “Bring Your Cell Phone to Church Sunday,” St. Andrew’s leaders encouraged everyone to bring their cell phones and take photos of the service. Their e-mail newsletter read, “Take at least one photo of our worship and post it on Twitter and/or Facebook and/or your Pinterest account.”

“We are just trying to find ways where people are comfortable inviting friends, and so we thought this would be a good way of doing it,” said rector, the Rev. Jim Liberatore.

Liberatore encouraged the congregation to post photos or status updates that referred back to the church’s Facebook page, Twitter, Instagram, or Pinterest account. Liberatore said it was hard to tell exactly how many people mentioned St. Andrew’s in social media on Sunday, but the parishioners were excited, including those who attend the more traditional 8 a.m. service.

The movement is part of a larger re-branding effort from St. Andrew’s. Earlier this year, the church unveiled a new logo featuring a pumpkin, which references their wildly successful pumpkin patch, which earned them the nickname “pumpkin church” within the community. Underneath the church name is the slogan “people … in progress.”

“It’s meant to mean more than one thing,” Liberatore said. “Basically, we are progressing as individuals, but we are also works in progress. So, it’s OK to be you.”

The church’s new mission focuses on growing the church at a rate of 10 percent per year for the next five years. In order to accomplish this, the members of the church will need to be open and welcoming to their friends and acquaintances, even those known through social media.

Liberatore hopes that his members will now feel free to share their church experiences more freely through social media, although there won’t always be time set aside to promote the use of cell phones.

“We’re not going to advertise it every Sunday, but we hope people will use it in church,” he said.