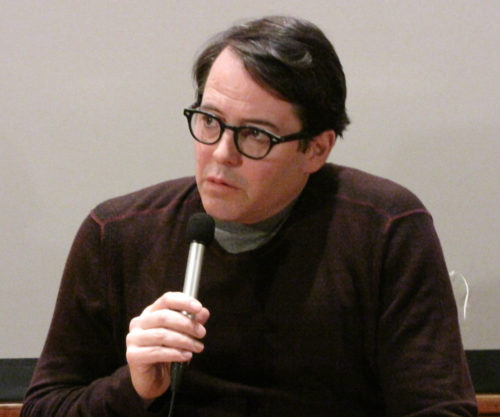 Matthew Broderick fields questions about the movie “Infinity,” which he directed and acted in, during the Lenten series at St. Peter’s Episcopal Church, Morristown, New Jersey. Photo/Sharon Sheridan

[Episcopal News Service] During the introspective season of Lent, a film and speaker series at St. Peter’s Episcopal Church in Morristown, New Jersey, aims to help participants reflect on who they are and how they are spending their lives.

It is, in a sense, of series about connections – within a particular family, and within the human family.

“Removing Our Veils” features three movies – “Infinity,” “Margaret” and “Wonderful World” – and post-film discussions with their directors, Matthew Broderick, Kenneth Lonergan and Josh Goldin. The Lenten series also will include a staged reading of the play “The Graduation,” read by church members and staged by the Rev. Janet Broderick, St. Peter’s rector, sister of Matthew and daughter of the playwright, the late Patricia Broderick.

The series is described as a way “to help us explore the powerful process of becoming the person God intended us to be. Who are you deep inside? What would happen if that voice were allowed to speak in full volume? How do friends and community empower us?”

The purpose, the rector told ENS, is to help people “look more deeply at themselves, understand the repercussions of letting time go by in which they do not use their own voice.

“It’s very serious to waste your life,” she said. “What I would want for the congregation is that they would see the seriousness of that folly – the old-fashioned word would be ‘repent,’ the new word might be ‘to take a risk.’”

The first film, “Infinity,” screened Feb. 24, depicts the early life of physicist Richard Feynman and his wife, Arline, as they take risks and live life fully. The film tells the parallel tales of Feynman’s growth as a scientist who works at Los Alamos National Laboratory in New Mexico as the atom bomb is being developed and the love story between him and Arline, who dies of lymphatic tuberculosis at a hospital in Albuquerque. Matthew Broderick starred as Feynman as well as directed the film, written by his mother. She wrote the screenplay based on the books “Surely You’re Joking, Mr. Feynman!” and “What Do You Care What Other People Think?” both written by Feynman and Ralph Leighton.

One audience member wondered about the actor’s inspiration for the film.

“I like science. I like reading about science,” Matthew Broderick said. “But I really liked the story.”

Several people asked about the filmmaking process, including the shots on location of ancient Pueblo ruins at Bandelier National Monument in New Mexico.

“That was an amazing place,” said Broderick, who said he had to negotiate for some time for permission to film there. They shot one scene, of a picnic the Feynmans held inside a cliff dwelling, inside the small cave. “The cameraman shot that scene with a hand-held camera, and he was sitting in what would be the fireplace.” 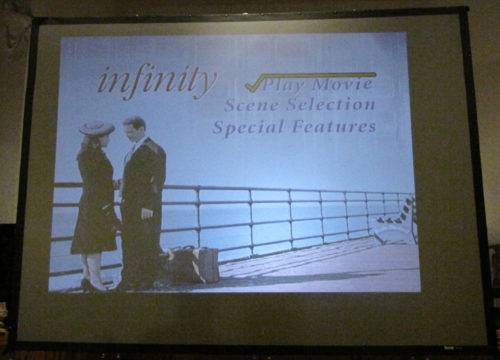 The film series began with a showing of “Infinity,” which depicts the early life of physicist Richard Feynman and his wife, Arline. Photo/Sharon Sheridan

Working with his mother during the filming of the 1996 film proved challenging in its own way, he admitted. “She was great but … she didn’t compromise so well.” Because it was a low-budget film, “you often didn’t get what you wanted.

“It was very challenging for all of us. She was filled with energy and came up with great solutions.”

Broderick family connections run through the series. Patricia Broderick wrote the play “The Graduation,” which features two teens in New York, one living in an apartment with her dying father. Matthew Broderick’s best friend since their teen years, Lonergan, directed “Margaret,” in which a young woman witnesses a bus accident and is caught up in the aftermath, where the question of whether or not the accident really was intentional affects many people’s lives. And Matthew Broderick stars in Goldin’s “Wonderful World,” a comedic drama in which Ben Singer has his cynical world view darkened by his roommate Ibu’s sudden medical situation — but the arrival of Ibu’s sister, Khadi, might remedy both men’s ills.

“I know this work very intimately because I was there,” Janet Broderick said. “I know these films because they were created and written within my community.” Lonergan and Goldin knew her mother well, and Lonergan worked with her father, the late actor James Broderick, she said.

Movies in general help forge connections, Matthew Broderick told ENS. “I think it makes you less alone when you realize that maybe some feeling you have is shared by the writer or the creator of the film.”

“Even a silly moment” such as in the Broadway musical comedy he is performing in – “Nice Work if You Can Get It” – that you as an actor find funny and the audience also finds funny creates a shared experience, he said. “I think it makes us more connected to each other.”

And the arts help us look at ourselves, “under the veils,” his sister said. “I don’t know where we would be without them.”

“The church is an art form,” she noted. It has structure, history, method and a language – not just of words, but of music, metaphors and visual images, she said. “I see as my task to integrate the church art form with other ways that people are able now to speak. These movies are … all created by artists. … These are existential movies.”

“That’s not to say that there is nothing sacred,” she added. “I think there is a tremendous amount of sacred work in these movies. I think it is obvious to any faithful person when they see it.”

More information about Removing Our Veils is available here.