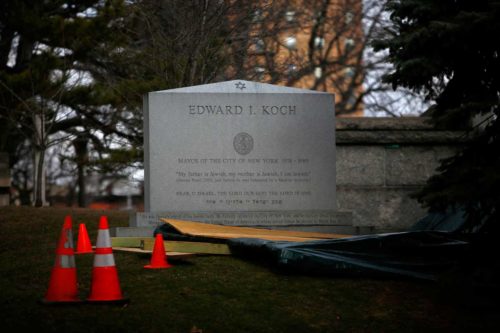 A headstone is seen bearing the name of former New York City mayor Ed Koch at a cemetery in New York, February 1, 2013. Koch, the voluble three-term mayor who helped bring New York back from the brink of fiscal ruin in the 1970s and came to embody the city with his wry, outspoken style, died on Friday at the age of 88. REUTERS/Eric Thayer

Koch, 88, who called himself a secular Jew, died Feb. 1 of congestive heart failure. His funeral was held Feb. 4 at Temple Emanu-El on the East Side of Manhattan. Current New York Mayor Michael Bloomberg and former U.S. President Bill Clinton were among those who eulogized the three-term mayor who helped New York rebound from fiscal troubles in the 1970s. Koch remained a visible icon of the city.

“He is with us even now even though the snows of many winters are now destined to cover his grave,” Rabbi David Posner, the senior rabbi at Temple Emanu-El, said during the service, according to a New York Times report. 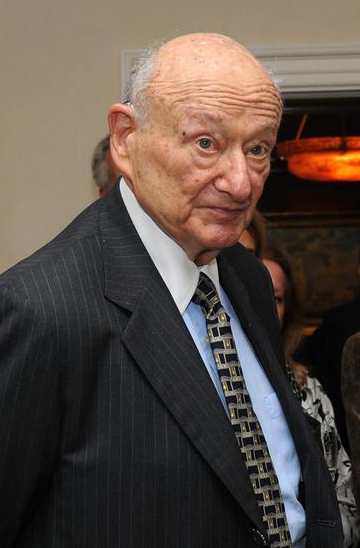 Koch’s grave will be in the Trinity Cemetery and Mausoleum at 155th and Riverside. The Rev. James Cooper, Trinity Wall Street’s rector, said Feb. 1 that Koch approached the church in 2008 about being buried in the cemetery.

“We were glad to find a way to oblige, even though in-ground burials these days are quite rare,” Cooper said.

The rector took Koch on a tour of the grounds and showed him where his grave would be in the non-denominational cemetery on a rise overlooking Amsterdam Avenue.

Koch told the Times that he consulted with a number of rabbis to ensure that his plan was acceptable. “I was going to do it anyway, but it would be nice if it were doable traditionally,” he said, noting that he was advised to request that the gate nearest his plot be inscribed as “the gate for the Jews,” and the cemetery agreed.

He was also instructed to have rails installed around his plot, so he ordered them.

Koch’s grave site, which was prepared in 2009, also has a bench and some trees, and is a place that Koch said he hoped people would visit.

It was widely reported that he paid $20,000 for the plot, which was one of the few left in all of Manhattan. Koch told the New York Times in 2008 that the purchase had been a good investment because the stock market, unlike the price of cemetery space, had since gone down.

Besides, “the idea of leaving Manhattan permanently irritates me,” said Koch at the time.

“I don’t want to leave Manhattan, even when I’m gone,” Koch told the Associated Press. “This is my home. The thought of having to go to New Jersey was so distressing to me.”

He added that he hoped to not need the gravestone he had ordered for “another eight to 10 years.”

The stone is engraved with English, Hebrew and transliteration versions of the Sh’ma Yisreal: “Hear O Israel, the Lord our God, the Lord is One.” Koch also chose to include the proclamation that Wall Street Journal reporter Daniel Pearl declared shortly before he was beheaded by Pakistani militants Feb. 1, 2002: “My father is Jewish. My mother is Jewish. I am Jewish.”

The mayor told the Wall Street Journal that those words are “as important as the most holy of all statements in Jewish ritual,” adding that they ought to be said by Jews “every Saturday night.”

The gravestone also says of Koch: “He was fiercely proud of his Jewish faith. He fiercely defended the City of New York, and he fiercely loved its people.

Trinity Church acquired the land for the cemetery and mausoleum in 1842, after a seven year search, according to information here. Its other burial lands were nearly filled to capacity and the city had in 1823 forbidden interments south of Canal Street. Trinity continues to operate cemeteries at the Wall Street church and at St. Paul’s Chapel.

The cemetery includes the graves of members of the Astor family; former Mayor Fernando Wood; New York Governor John Adams Dix; mistress of the Morris-Jumel Mansion, Eliza B. Jumel; author of the “Night Before Christmas” Clement Clarke Moore; and author Ralph Ellison. In 1893, the Academy of Sciences erected a monument over the grave of the naturalist artist John James Audubon who had lived on an estate bordering the land the cemetery occupies.