[Episcopal News Service] What does a new beginning look like?

For many the New Year is for planning positive changes and forging new paths for wellness: heart-healthy diets, cardio regimens or new gym memberships. But what about the other “heart” health? How often do you need to be reminded to nourish and exercise the spirit?

When the late running philosopher George Sheehan, M.D., gave motivational talks to runners, he often quoted the wife of a running convert: “My husband used to be a Methodist. Now he’s a runner.” Running may not be a religion, but, Sheehan would say, “It’s a retreat, a place to commune with God and yourself, a place for psychological and spiritual renewal.”

To prepare for a recent weeklong clergy wellness retreat, the Rev. Ronnie Willerer, associate rector of Church of Our Saviour in Jacksonville, Florida, committed to walking every day with her spouse using the Walk and Be Well podcast from CREDO, an Episcopal Church health and wellness program. The podcast series is four weeks of reflections on Psalm 139’s message “I am marvelously made,” to be accompanied by a 30-minute walk.

“In the past, I’d always exercised to lose a few pounds or as ‘we’ time with my husband. But in the last couple of years, we have not been that intentional about it,” Willerer said, in a recent interview with Episcopal News Service. “It was a good excuse, no, not an excuse, a good reason. The meditations proved to take me in a different direction than mere exercise, because the meditations focused on the magnificence of the creation of your body and the health of your body.”

Whether they discussed the daily meditation or not, she and her husband found that the 30-minute walk was a time for deep conversation and reconnection. Her parishioners began following the podcast themselves and have been using many of the CREDO resources for women’s retreats and personal commitments to exercise combined with spiritual wellness.

Certified personal and professional coach Elizabeth McKay Moosbrugger is one of the program’s writers. For Moosbrugger, exercise and prayer are bound together. During her morning runs, she repeats as a mantra the prayer from Oswald of Northumbria.

“I say, ‘All that I am, Lord, I place into Your hands,’ and I think of all roles that I play in my life,” she told Episcopal News Service. “Next is, ‘All that I do,’ and I think about that coming day and what I’m being called to do in my schedule, and I place those things in God’s hands … It slows my brain down to give me a sense of being connected with God. Things that seemed overwhelming don’t seem so at the end of my run.”

Her contributions to the series examine how the body is God’s gift; how people are nourished with food, work and relationships; and what that means to God.

“It’s refreshing to come from that place to support and love our bodies,” she said. “That’s especially so for ministers, because they need the strength to support their communities.” 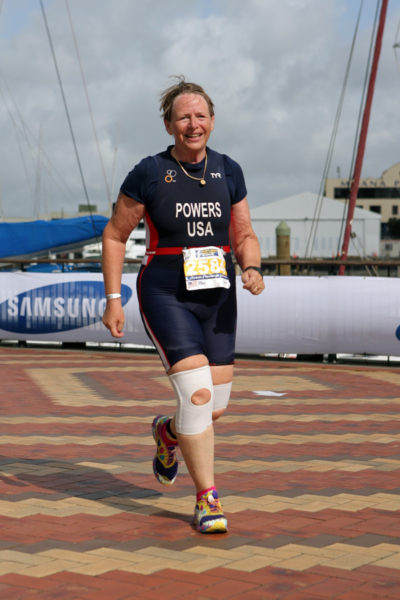 “This combination of inner and outer wellness is essential for ministry,” the Rev. Fairbairn Powers, priest-in-charge of St. Agnes’ Episcopal Church in Little Falls, New Jersey, told ENS. “I would venture that many people don’t exercise as much for their bodies as much as they exercise for emotions – all that soul stuff. As priests, it makes it possible to cope with what we have to deal with in our parishes.”

Powers offers an intercessory prayer for one of her parishioners for each lap of her daily swim, bike or run. The 73-year old triathlete began running marathons and doing cross-country skiing in her 40s. She pieced together the whole Appalachian Trail during backpacking adventures in her 50s and 60s. And now, in her 70s, she recently completed an International Triathlon Union Age Group and Sprint World Championships in Auckland, New Zealand, placing third in her age group.

For a Jan. 2 article for the Episcopal Diocese of Newark on her theory about the value of exercise for clergy, Powers tossed a question about exercise onto the diocesan clergy listserv: Did members exercise regularly, and did it make a difference in their spiritual, parish, personal and family lives?

She wrote that more than 35 responses arrived from runners and joggers (the Rev. Ed Hasse tops her list, with 26 marathons and counting – he prays as he runs in the mornings), as well as swimmers (the Rev. John Hartnett anchors this group, swimming a mile and a half each morning and finding that this “brings a peace which I rarely experience the rest of the day”). Deacon Nancy Read finds that her long run “frees my soul and feeds my body.”

One priest shifted her schedule to allow time each morning for prayer, meditation and lifting weights at the gym after a medical “wake-up call.” Many walk; one couple rides horses; some do yoga, diving and dance; several are cyclists. At least four, including Powers and the Rev. Cathy Deats, are triathletes.

One priest who hikes at least once a week said, “It’s like prayer … and nurtures my relation to the Creator.”

Their common message, Powers found, was that exercise is a time for centering, for moving into connection with God, and that regular exercise leads to improvements in body, mind and spirit. Unanimously, the clergy told Powers that exercise grounded them and took them farther to a place where they really could pray.

“I think we’re integrated beings, so our body, mind and spirit all work together,” Bishop Mark Hollingsworth Jr. of the Episcopal Diocese of Ohio told ENS. “When I am attentive to my disciplines of exercise and study and prayer, I’m healthier in all three aspects.” 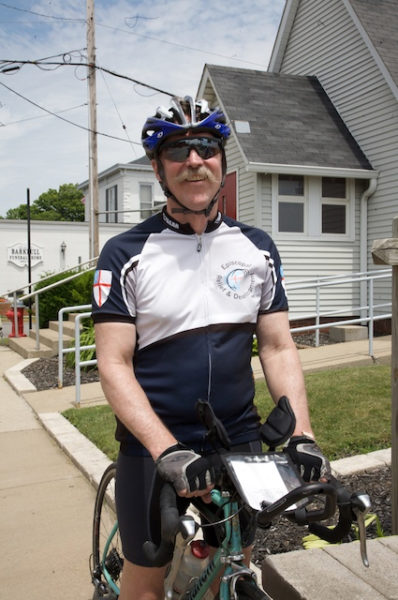 An avid cyclist, Hollingsworth leads the annual fundraising Bishop’s Bike Ride through the Diocese of Ohio that draws together Episcopalians of all ages and abilities. He also cycles home from General Conventions – including a 4,000-mile trek in 2009 from Anaheim, California, to the Episcopal Church Center in New York.

“Endorphins change our perspective, but I also think that when I cycle, I get out of my own way,” he said. “I become focused on cycling, that rhythm and my breathing, and it clears my head. In a sense, it gets me out of my own way and the typical thinking we tend to fall into when we’re focused on the hard issues.”

Presiding Bishop Katharine Jefferts Schori has stressed that some of the most significant clergy-wellness initiatives in the last few years have involved awareness of health and balance, including programs like Fresh Start and the work of CREDO.

In a January 2010 interview with health coach and fitness lifestyle expert Peter K, Jefferts Schori said, “Awareness of health in the broadest sense is really what the church is about. Jesus said he came that we might have life and have it abundantly. Abundant life is about healed relationships with ourselves, with God, with our neighbors.”

A long-time runner, hiker and mountain climber, Jefferts Schori is herself a role model for healthy lifestyle. “Taking care of the bodies we have … is an essential piece of tending the equipment with which you do ministry in the world … Do you love who you are, do you love and respect the tool in your body that you’ve been given?” she asks. “Deciding how I treat my body, how I spend my time, how I find refreshment, is a way of serving and a way of being ready to serve.”

Focusing on how wellness can sustain the mind, body and spirit can help parishes take a whole-life approach – fostering marital harmony, alleviating job stressors or providing active family time. Churches across the country are using fitness as a tool to spread the gospel and to build community. Parishes are adding yoga classes, walking and Zumba in an effort to make their congregations healthier and make the church a nexus for parishioners’ needs. St. John’s-Grace Episcopal Church in Buffalo, New York, for example, offers modern dance and ballet classes. The Parish Life Center at St. John’s Episcopal Church in Memphis, Tennessee, provides basketball and soccer camps for kids, flag football and 5K remembrance runs.

For the Rev. Scott Richardson of the Episcopal Church of St. Mary the Virgin in San Francisco, exercise is more about community and camaraderie than duty or painful exertion. His parishioners meet weekly for walks across the Golden Gate Bridge and Crissy Field; he walks daily with his wife and their dogs; and he enjoys frequent golf outings with his brothers.

“If I’m physically healthy, watching my sugar intake, abstaining from alcohol, then that’s good modeling for my congregation,” he told ENS. “People pick up on the blessing of that in their own life, and you just never know what influences lead people to change.”

More than 1,250 people – laity and clergy – have committed themselves to 30 days of CREDO’s Walk and Be Well, the start of a new habit of spiritual and physical balance.

“Whether exercise has been on their radar or not, it’s a great platform for people who think something needs to change in their lives,” said Moosbrugger. “We start these lofty goals and then it rains or a child gets sick, something knocks us off our regular routine. What brings you back to things you love to do and is good for you? For me, coming to realize that I’m marvelously made was a huge part of my exercise life.”

Jefferts Schori agrees. In her interview with Peter K, she said, “I don’t think you have time not to exercise. Most people discover when they have [a] regular physical activity routine, they have more time and energy for the rest of their daily life.”

— Sarah Moïse Young is a freelance reporter based in Charleston, South Carolina.