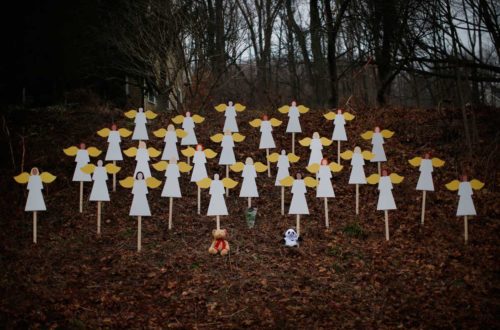 [Episcopal News Service] Thoughts, prayers and expressions of sorrow flowed in from Episcopalians across the United States and from Episcopal Church partners in the world-wide Anglican Communion in response to the Dec. 14 shooting massacre at Sandy Hook Elementary School.

On Friday, a gunman forced his way into the school, killing 26 people, 20 of them first-grade students, including Ben Wheeler, whose family attends Trinity Episcopal Church in Newtown, Connecticut.

In a Dec. 15 statement posted on the Diocese of Connecticut’s website, the bishops specifically asked for prayers for Ben and his family. Besides Trinity, a second Episcopal church, St. John’s in Sandy Hook, sits adjacent to the elementary school. No one at St. John’s lost loved ones in the tragedy, the statement said.

Also, on Dec. 15, the Connecticut bishops ordained three new priests, each bishop beginning the service with a time of silence and then by reading the collects on page 494 in the Burial Service in the Book of Common Prayer.

Thoughts and prayers have come in from across the Episcopal Church and the Anglican Communion, with Bishop Robert Gillies of Aberdeen and Orkney in the Scottish Episcopal Church writing a special collect for the Diocese of Connecticut.

The diocese has created a disaster response page and also liturgical and musical resources in response to the massacre.

In her sermon Dec. 16 at Church of the Church of the Resurrection in Lexington, Kentucky, Presiding Bishop Katharine Jefferts Schori urged those present to find something to rejoice about.

“Even in the face of the pain around us, we are here to discover joy – today and every day,” she said.

“Given what happened in Connecticut on Friday, is there a place for a precise, even surgical, strike against gun violence?” she asked.

“When nearly 3,000 young people in this country die every year from guns, wise heads must get to work and find a creative and life-giving response.  The deadly snakes out there are peddling and profiting from guns while children die.  What is a good-news response?  Other nations have found ways to limit access to assault weapons while still permitting people to shoot clay pigeons and hunt game.

“Other smart adders might look at the loneliness and lostness around us.  The young shooter in Connecticut seems to have been mentally ill – his former classmates aren’t terribly surprised at what’s happened.  We’ve heard almost exactly the same thing every time one of these events has occurred in recent years.  Preventing more of them is going to mean greater watchfulness and a willingness to reach out to the outcast, the one who doesn’t fit, the kid who sees nothing to live for.  It means loving the ones who don’t seem terribly lovable, and that’s exactly where Jesus would be and what he’d be doing.”

In his Dec. 16 sermon, the Very Rev.  Gary Hall, dean of Washington National Cathedral, reminded those present that the shooter was human.

“And then from the parents [of the children] my thoughts go to the shooter. While I resist the temptation to speculate about his mental or emotional state, it’s hard to imagine someone carrying out such an act who wasn’t in an awful lot of psychic pain themselves. We reflexively turn to calling such people ‘evil,’ as if in so doing we mark them as somehow different from us.

“Was the shooter ‘evil’? In the sense that he caused a lot of innocent suffering, yes I suppose he was. But can we call him ‘evil’ as a way of excluding him or his actions from the realm of humanity? No, I don’t believe we can,” Hall said. “We need to understand his action – and the actions of all violent people – as a part of what it means to be human.

“Like it or not, we are bound up with each other in a complex matrix of motivations and actions. To understand is not to excuse. Let’s not apologize for the shooter, but let’s not try to pretend that he’s someone other than us, either. If he was mentally ill, he was also a member of a family, and we know that existing laws make it very difficult for families to control or institutionalize their violent members.”

He later said that he’d had enough.

“Which leads me to say, on behalf of this faith community at least: Enough is enough. As followers of Jesus, we have the moral obligation to stand for and with the victims of gun violence and to work to end it. We have tolerated school shootings, mall shootings, theater shootings, sniper shootings, workplace shootings, temple and church shootings, urban neighborhood shootings, for far too long… “

The bishops in the Diocese of New York issued a pastoral letter Dec. 17, calling for “creation of responsible, constitutional measures of reasonable and effective gun control.”

“Over and over, we watch the horror, the pain and the grief laid upon the shoulders of people like us in communities like our own, who must then bear that horror and carry that pain as they pick up their lives and find a way to go on.  As in far too many other places in America, Newtown will never be the same.  The events of Friday will cast a shadow into the future which will darken much that is yet to come.  And for the families of the lost, especially the young lost children, these losses will temper every happiness and cloud every joy for a long time.  We pray God’s blessing, we ask God’s grace, we invoke God’s peace for every troubled heart,” the bishops wrote.

“But this was the second mass shooting in America in three days.  It was the 13th in 2012.  We, your bishops, believe that it is past time for the United States to commit itself anew to the creation of responsible, constitutional measures of reasonable and effective gun control.  We call on our elected representatives to engage the debate, resolve the question and come to terms finally with the place and power of arms and weapons in our laws and in our common life, that we may by the grace of God and the courage of good national leaders live in peace and without fear in safe towns and cities, in safe schools, in safe movie theaters and shopping centers.”

In 2011, the Diocese of Chicago and Bishop Jeffery Lee made combating gun violence a priority in response to an increase in gun-related violence, which affects a high proportion of children,. Even before the Dec. 14 massacre, members of the diocese planned to participate in a “Silent Nights” vigil Dec. 17, an opportunity for people of all faiths to work and pray for nights whose silence is unbroken by gunfire and to urge the governor and state legislators to pass gun control laws

“I am heartbroken and horrified by the news of the massacre at the Sandy Hook Elementary School in Newtown, Connecticut, this morning,” said Lee in a Dec. 14 post on the diocesan website.  “People who live in the Diocese of Chicago are achingly familiar with the fear, anxiety and grief that comes from living in an area in which guns are too readily available and too frequently used. Yet even as someone who lives with the shaming reality that we cannot protect our young people from gun violence, I am stunned by the madness that unfolded today in Connecticut.”

At Trinity Cathedral in Cleveland, Ohio, Dean Tracey Lind began the Dec. 16 11:15 a.m. service with a moment of silence and prayer for those who lost their lives in the massacre and then called on the congregation to send letters urging Ohio’s governor not to sign a gun-related bill passed by the state’s legislature.