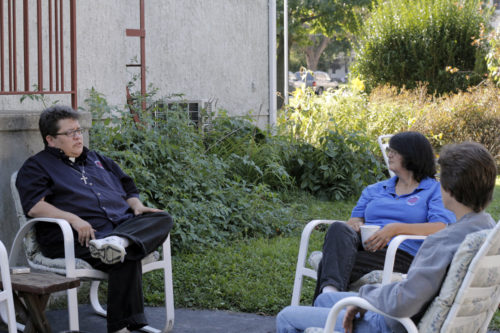 The Rev. Kelly Ayer, director of Zion House, and two of the house’s residents have a conversation in the house’s backyard. ENS Photo/Lynette Wilson

[Episcopal News Service] After leaving an unhealthy relationship, Linda, a U.S. Navy veteran, moved in with her son and his girlfriend — until the three combined couldn’t make the rent.

“He [her son] was working 20 hours a week at Wendy’s, and that didn’t cut it. We all became homeless,” said Linda, 60, who preferred not to give her surname.

For 11 years, Linda worked as a seasonal employee for an upstate New York food-processing plant, canning beets, carrots, mixed vegetables. She’d worked her way up to $16 per hour, but she missed the most recent season.

“I suffer with depression … had a lot of things in childhood,” she said. “I’ve got a lot going on with me.”

Upon losing the apartment, Linda approached a local social-service provider for help in storing her furniture and learned she was eligible for veteran’s benefits.

“I was going to borrow a tent and go and live down by the river,” she said. “I was surprised to find I had any benefits; and I have all the benefits.”

In late May, Linda arrived at Zion House, a transitional home for homeless female veterans established in 2010 by Zion Episcopal Church in Avon, New York, in the former rectory.  At its founding, Zion House was one of two such transitional homes in the nation; today about a dozen such homes exist.

Thirty women have sought refuge at Zion House in its first two years of operation. All have suffered military sexual trauma and post-traumatic stress disorder; a quarter have had substance-abuse issues (incoming residents must be 30 days clean); and some have been schizophrenic or had bipolar and borderline personality disorders, said the Rev. Kelly Ayer, 39, director of Zion House.

Progress, not perfection
In 1994 the VA established the Center for Women Veterans to review women’s programs and to assure that women, without discrimination, had access to benefits and services on par with those of their male counterparts. In 2011, the department created the Women’s Veterans Task Force to develop an action plan to resolve gaps in how it serves female veterans.

Despite the advances and the VA’s efforts, Ayer said it had been frustrating to witness a lack of care, follow up and communication between doctors and service providers.

“I get that the VA is stretched very thin, I get that,” she said. “But in the same breath, it’s very frustrating not only to us who serve them, but to [female veterans] as well,” she said.

“It’s already difficult for women to go to the VA, especially when they are hurting, especially if they have been hurt in the military,” said Ayer. “There’s a trust that has been betrayed, so it’s harder for them to seek out care from an institution associated with the military.”

In 1950, 2 percent of uniformed soldiers were women. Today, women account for 14 percent of active duty soldiers and 18 percent of the National Guard, which has about 2.9 million soldiers split almost evenly between active and guard duty. Female veterans form the fastest-growing group, totaling 8 percent, or 1.8 million of 22.2 million veterans, based on 2011 figures, according to a draft 2012 Women Veterans Task Force Report.

An interest in female veterans, particularly the homeless and the abused, has correlated with the increase in their numbers, said Episcopal Bishop Suffragan for Federal Ministries James B. Magness. More recently, he said, he’s seen an uptick in the number of stories of female veterans appearing in magazines published by the Veterans of Foreign Wars, the American Legion and Disabled American Veterans.

“We are taking note of this,” he told ENS in a telephone interview from his office in Washington, D.C. “The incidence of the female vet population in need of services has created a perfect storm.”

More women are serving, and serving in “far forward” positions — closer to combat in the “theaters of operation” — and consequently suffering more trauma and having more incidences of abuse come to light, Magness said, adding that the economic downturn also contributed to the “storm.”

Home sweet home
At Zion House, one shelter amidst that storm, a wall calendar and a check-in/out board coordinate the women’s appointments, work schedules, cooking and cleaning schedules, and general comings and goings, as well as the availability of a part-time case manager who helps each woman develop a plan toward independence.

Zion House’s license permits up to six women, all of whom receive a $38 per diem from the VA to cover food, transportation and housing. Half of the referrals come from the VA; the rest of the residents arrive through word of mouth and Ayer’s regional networking. (In May, Ayer received the Military Hero Award in the American Red Cross “Hometown Heroes” series.)

Residents make stay up to two years, but the average stay has been six months, said Ayer. Most transfer into permanent housing, some move in with family, and some, in those rare cases involving severe mental illness, transfer back into VA care.

Ayer, herself a U.S. Army veteran who spent two years on active duty as a combat medic and six years in the reserves, experienced military sexual trauma and suffers from PTSD.

“When I left the military, I left with a bitter taste in my mouth. It was an old-boys network,” said Ayers. A lesbian serving in the age of Don’t Ask, Don’t Tell, she suffered sexual harassment from higher-ranking officers, she said.

“One of the things that being the director of Zion House has done for me is allowed me to reclaim my pride in have serving,” Ayer said. “Now I am proud that I was in the Army, and I’m proud that I’m not only serving my church but my country again through working with these women.”

Sexual assault in the military is not new. In 2005, Congress mandated that the U.S. Department of Defense create a task force on military sexual assault after it became clear women and men increasingly were reporting sexual assaults.

One in five women and one in 100 men report experiencing military sexual trauma. But, even by its own estimates, those figures are low given that sexual trauma often goes unreported and the data represents rates among veterans seeking VA heath-care assistance and “do not address the actual rate for all those who serve in the U.S. Military,” according to a VA factsheet. (See The Invisible War), a 2012 documentary about the epidemic of rape in the U.S. military.)

At Zion House, things can get hectic with up to six women living there at any time, all of them at crossroads in their lives and all of them having suffered trauma and, for some of them, physical and sexual abuse dating back to childhood. Ayer and the women, over coffee and cigarettes, spend a good bit of time in conversation.

“I’m not afraid to sit with someone in pain, and I think that’s key to this job,” said Ayer. “Some of these ladies feel like they own the evil done to them, and so they tell themselves they don’t deserve to breathe. I tell them they are beloved and they think I am full of [it] tell them you are beloved because you breathe.

“They don’t believe me, but I say that’s OK and keep telling them.”

Zion House resides in Avon, population 7,000, a quaint New York village 26 miles south of Rochester. The church sits at the top left of a roundabout that circles the town’s center, where men, and some wives, meet mornings for coffee and breakfast at the Village Restaurant just off Main Street.

When Zion’s rector, the Rev. Mark Stiegler first approached the vestry with applying to a VA grant program  to assist in turning the rectory into a transitional home for veterans, the answer was “no,” he said.

“All they could envision was a bunch of drunk soldiers hanging out on the porch,” said Stiegler, who served in the U.S. Army from 1959-1962 and then in the reserves until 1966, during a Sept. 11 interview in his office.

Later, serving as a grief and loss counselor in his role as a VA chaplain in Rochester, Stiegler encountered a woman on the verge of becoming homeless. She told him: “They should have places for women like they do for men.”

The woman was referring to Richard’s House, a home for men operated by Veterans Outreach in Rochester.

“I brought that to the vestry, and it flew immediately,” he said.

It took two failed grant applications and more than three years before Zion gained VA approval and another two years before Zion House welcomed its first resident. Throughout the grant process and readying the house and continuing through the program’s operation, Zion has relied on more than 30 volunteers and donations from individuals and organizations, with the Veterans of Foreign Wars’ ladies auxiliaries among the strongest supporters. The New York Ladies Auxiliary, for instance, gave Zion a $26,000 grant, Stiegler said.

The house has a slightly more than $100,000 annual operating budget and relies on donations to cover costs beyond the VA’s per-diem allotment.  Residents able to work pay up to 30 percent of their income in rent. Zion House also started a work rehabilitation program, Boadicea Spa Products, to offer women the option to work and offset the house’s operating costs.

Among current residents, Linda joined the U.S. Navy at age 28 after working as a “dispersing clerk,” or a payroll clerk in civilian terms, in Pensacola, Florida, and was stationed in Guam.  By then a single mom and unable to deploy at the time of notice, she left the Navy in 1984.

Maggie, 49, another veteran who lives in the house, served eight months in the Army at Fort Jackson, in Columbia, South Carolina, before a staff sergeant attacked her during a training exercise. She told her captain if he couldn’t protect her, he had to get her out.

“I knew I had to do something. If I just went in an boohooed, nothing would have happened,” she said, adding she went into the military at 17 and was out at 18.

Maggie, who also preferred not to provide a surname, rented a room and got a job. Eventually, she worked her way into quality-control management at Kodak before getting laid off. (Headquartered in Rochester, Eastman Kodak historically has been a major regional employer, dating back to George Eastman’s invention of roll film and the company’s founding in the late 1800s. Massive layoffs began in 2004.)

Maggie also spent 15 years working as a social worker. Until December 2011, when a 46-year-old woman in a state of “road rage” attacked her at a gas station, Maggie ran her own taxi-limousine service. After the attack, “I couldn’t do it anymore, and I lost the business.”

And then she lost everything. At a homeless shelter in Rochester, a veteran-outreach coordinator told her about Zion House. She and her dog, “Dot,” who lives there as well, arrived in early June.

“It’s a safe place to lay my head,” said Maggie. Turning 50, not knowing what the future holds, she added, “I have a lot of angst about that. What do I want to do? … I think all of the women feel that, worried about our future.”