[Episcopal News Service – Auckland, New Zealand] Much happens each day during the Anglican Consultative Council’s (ACC) 15th meeting. In addition to Episcopal News Service’s other coverage, here’s some of what else went on Nov. 7 (local time), the final day of the Oct. 27-Nov. 7 gathering. 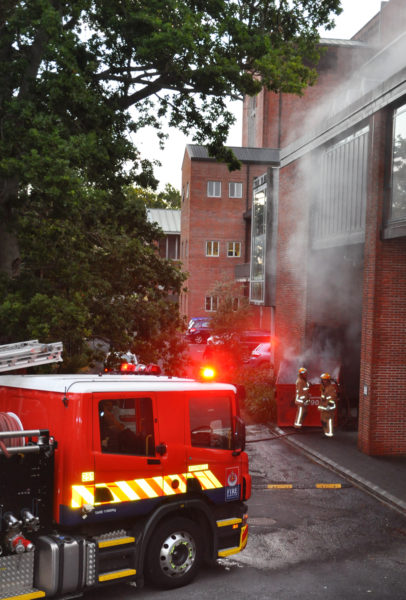 White smoke over cathedral
Holy Trinity Cathedral Organist Philip Smith had just begun Louis Vierne’s Toccata in B flat minor as the organ voluntary for the closing Eucharist of ACC-15 when smoke alarms began to sound in the cathedral.

The altar party and choir had already recessed, and ushers began urging ACC members and other attendees to exit quickly as smoke began to fill the building. They emerged into a cloud of acrid smoke circling the cathedral’s forecourt and wafting over the roof.

A trash bin in the lower car park at the back of the cathedral was smoking and the Auckland Fire Department was already extinguishing the smoky fire by the time people had left the cathedral above.

On a day filled with rumors of the impending announcement of Archbishop of Canterbury Rowan William’s successor, one Anglican priest of the province urged his fellow bystanders not to interpret the smoke as a signal of a new archbishop.

ACC-16 will meet in Province of Central Africa
Anglican Communion Secretary General Kenneth Kearon told the council that the 16th meeting of the ACC will be held in May 2016 in the home province of its chair Diocese of Southern Malawi Bishop James Tengatenga.

“We’re very grateful that you have accepted the invitation to come to the Church of the Province of Central Africa,” Diocese of Lusaka Bishop David Njovu, who is also an ACC member, told the council.

The bishop predicted that the meeting will be “transformational” both for Anglicans in the province and for those visiting Anglicans who will experience the “vibrant” church in Central Africa, which he said united even though it is in a “hostile environment.”

Njovu asked for the council continued prayers for Anglicans in Zimbabwe, which is part of the province. The Anglican Church in Zimbabwe has been under attack from the excommunicated bishop, Nolbert Kunonga, since 2007. Kunonga, with the support of police and henchmen, has seized church property and used violence and intimidation to break up church services. In a 2011 media interview, Kunonga was quoted as saying he aimed to control the 3,000 Anglican churches, schools, hospitals and other properties in Zimbabwe, Zambia, Botswana and Malawi, which make up the province. At the end of 2011, the archbishops of Canterbury, Central Africa, Southern Africa and Tanzania met with President of Zimbabwe Robert Mugabe and presented him with a dossier that outlined how Anglicans have been persecuted over the years.

“The persecutions that the church in Zimbabwe has gone through” has made it stronger and “their faith has grown,” said Njovu. “We are looking to Zimbabwe for how to deal with situations like the one they have.”

Press briefing harkens back to royal wedding
The first question to Archbishop Rowan Williams at an afternoon press briefing that included local Auckland media concerned what it was like to preside at royal weddings.

Williams said the pre-marital counseling time he spent with Prince William and Duchess of Cambridge Catherine “was pretty much what I do with any young couple and because they’re a young couple fairly typical of their generation, that was in its way challenging, interesting and very moving.”

The archbishop said he also told the couple that even if they were aware as they walked up the aisle that five billion people were watching, “when you get to the sanctuary it won’t feel like that, you’ll be looking at each other, your families and, unfortunately, you’ll be looking at me, and that’s what it is going to be about.”

The marriage service “was a really extraordinary platform for talking nationally and internationally about marriage, about how the church sees marriage and about the significance of this commitment,” he said.

Resolutions passed by council today
In addition to the resolutions reported here, the council also acted on:

All ACC-15 resolutions are due to be posted here.