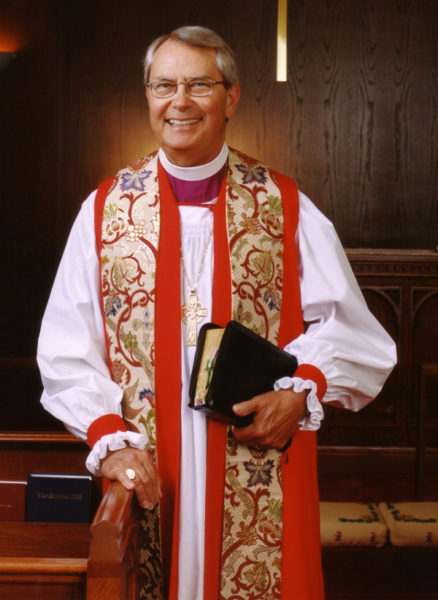 [Episcopal News Service] The Rt. Rev. Rayford High was elected and installed as the third provisional bishop of the Episcopal Diocese of Fort Worth during the 30th Diocesan Convention Nov. 3 at Tarleton State University in Stephenville, Texas.

The convention was voting on the Sept. 19 recommendation of the diocesan Standing Committee, which had called High to serve as its next provisional bishop. High served as bishop suffragan of the Episcopal Diocese of Texas from 2003-2011.

High succeeds the Rt. Rev C. Wallis Ohl, who retired as provisional bishop at the end of the diocesan convention. Ohl issued a call for the election of a bishop diocesan, a process that can take more than two years.

“This marks a significant step in the growth of the diocese, as the process will culminate in the election of a full time bishop,” according to a diocesan press release.

“I am deeply honored and humbled by the fact that the Episcopal Diocese of Fort Worth would ask me to be their provisional bishop,” High said, according to the release. “I am thrilled and I am excited about it and I look forward to working with laity and clergy of the diocese.”

High said he was impressed by the spirit of love and respect that permeated the convention’s discussions. “People disagreed with one another, but in love,” he said. “Everyone listened respectfully and voted prayerfully. This is a healthy diocese.”

Ohl used the theme of bridge building for his convention address. “The metaphor of bridge is appropriate, not only as I transition out and Bishop High comes on board, but also as we the Episcopal Diocese of Fort Worth continue to grow into the ’measure of the stature of the fullness of Christ.’” (Ephesians 4:13 RSV)

He reminded the convention delegates and visitors that the election of another provisional bishop is “not a stop-gap measure; we are progressing toward the time when we will be able to elect and consecrate our next diocesan bishop.”

Before his election as bishop, High, 71, served the Texas diocese as canon for pastoral ministries and liaison to St. Luke’s Episcopal Hospital in Houston. His 32 years of parish ministry culminated in his service as rector of St. Paul’s Episcopal Church in Waco. He represented the Texas diocese as a deputy to General Convention on eight occasions and was named Waco humanitarian of the year.

A native of Houston, High graduated from Sewanee: The University of the South in Tennessee and Episcopal Theological School in Cambridge, Massachusetts.

High and his wife Pat live for now in Lake Jackson. They have been married for 48 years and have three children and six grandchildren, all of whom live in Fort Worth. They will be moving to Fort Worth in early 2013 when their new home is completed.