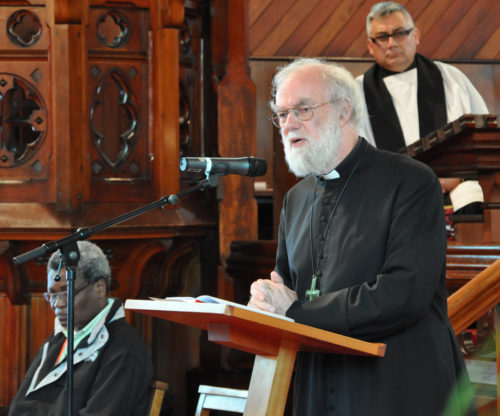 [Episcopal News Service — Auckland, New Zealand] Soon-to-retire Archbishop of Canterbury Rowan Williams told the members of the Anglican Consultative Council that he prays joy “will overflow in the common life of this council and in our other bits of common life in the communion” so that the council, his successor, the Primates Meeting and the Lambeth Conference will exercise what he called “a truly enabling authority.”

The archbishop, who retires at the end of the year and whose successor has yet to be named, spoke during Evening Prayer in St. Mary’s Church on the grounds of Holy Trinity Cathedral here. His address came on the 10th day of the ACC’s 12-day Oct. 27-Nov. 7 meeting.

Williams also said near the end of his speech that he wanted publically to “wish every blessing, every success, every strength from God to the 105th archbishop of Canterbury whoever he may be.”

He said he offered that prayer “recognizing as you and I do, and perhaps he won’t for a while, what an extraordinary job it is, just how much you need to be aware of the grace of God constantly supplementing, to pick up a favorite phrase of mine from the great Richard Hooker, ‘our common imbecility as archbishops,’ just how much we need the love and loyalty of those around us.”

Early in his address, Williams developed the notion of “enabling authority” when he said that he read that morning in the local newspaper that “front-line jobs in the ACC could be at risk.” He pointed out that this “rival” ACC was the government’s Accident Compensation Company.

“But I wonder if that is sometimes how we view ourselves: as an accident compensation company,” he said. “Are we here as the ACC to pick up the pieces, to make things alright, to react to disaster and crisis?”

Looking back over his 10 years in office, Williams said, it seemed to him “that every attempt we’ve made to pin down exactly how reactive or corrective authority works in our Anglican family has run into the sand in one way or another.”

And, the communion has realized “that frustration, that discovery that it’s actually very hard to find absolutely clear sources of authority, has to do, of course, with the fact that we are a family of churches, each one of which has its own ways of reacting, correcting and setting boundaries,” he said.

Williams said the New Testament does speak about “reactive or corrective” authority, but it also offers an alternative in the authority of Jesus that astonished observers when he performed “spectacular acts of liberation.”

“The authority in question is an authority to act and to make a difference,” he said. “An authority that enables and empowers.”

The challenge facing the 38 provinces of the Anglican Communion – what Williams called “38 distinct local churches” —  “can actually find a legal spirit – an ethos – that they share by consent, exploration and discovery rather than … kicking the whole issue upstairs to some supreme authority.”

The communion’s members must work out a way to “iron out our inconsistencies between our practice as provinces” and “work at ensuring common standards of good process, openness and fairness.”

“Some of the headaches of the last decade or so have revealed some unclarity within provinces as well as between provinces about what we can actually do,” he said.

The hopes for an Anglican Covenant were in part “hopes for a framework, a climate, in which some of those questions might be addressed by consent, not by coercion,” Williams said.

Acknowledging that “we don’t as yet know how that project will finally work itself out,” Williams said “I still hope and pray, speaking personally, that the covenant has a future because I believe we do have a message to give the Christian world about how we can be both catholic and orthodox, and consensual, working in freedom, mutual respect and mutual restraint without jeopardizing the important local autonomy of our churches.”

He warned that not finding the right balance risks “the danger of becoming less than we aspire to be as a communion … a family that lives in mutual respect and recognition.”

To retreat from being a catholic, orthodox and consensual “family” into “simply being a federal model,” Williams said, “doesn’t seem to me to be the best and the greatest that God is asking from us as an Anglican family.”

Williams reminded the ACC that it had begun a discussion about the four instruments of communion, of which it is one and the others are the archbishop of Canterbury (who serves as president of the ACC), the Lambeth Conference of Anglican bishops, and the Primates Meeting. He suggested they must ask how the instruments “speak with enabling authority.”

It has been “a great blessing to our communion” that the Primates Meeting and the ACC have been commissioning “proactive work” in the areas such as theological education, the Anglican Alliance and the Bible in the Life of the Church and Continuing Indaba projects, he said.

That work arose from the desire on the part of some of the instruments to enable mission and ministry in the communion, “that is, not simply to react or correct, but to change a situation by trying to be creative.”

ACC members must consider how all the instruments can be “more fully and effectively freed” for that enabling task “because in one way or another all of the instruments of communion are hampered, are less than they might be.”

He suggested that recent expectations of both the Primates Meeting and the Lambeth Conference have been “over-hopeful or over-cynical.”

“Both of those reactions have disabled what those meetings can do,” Williams said.

The archbishop said that the communion is at a “promising moment” because its leaders are thinking about how the instruments “assist us to be the church.”

“Notice, I don’t say ‘assisting us to be a church,’ that is, to be a more tightly organized institution, but how to be the church, the body of Christ,” he said. “In other words, the instruments are there so our Anglican family and our Anglican faithful will show to the world that the new creation truly is new, that the church truly is different.”

The networks are evidence that “God is stirring up in our communion deeply different ways of action,” the archbishop said, which will not immediately solve the problems he outlined at the beginning of his address.

But God’s guidance of the networks’ innovations “should at least tell us that God does not necessarily wait until we have solved our problems to enable us to be effective disciples.”

If Anglicans must stand before the throne of God and answer for why they did not preach the gospel and serve the poor, “it will be a very poor answer … [if] we say we had too many internal problems to resolve; we couldn’t quite decide who had the authority to pronounce on this.”