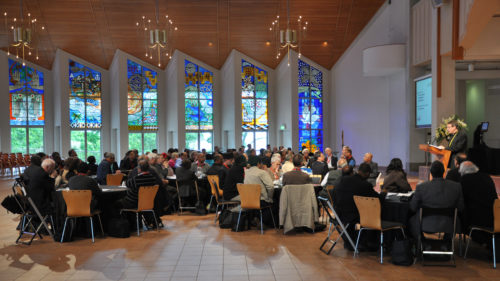 [Episcopal News Service — Auckland, New Zealand] Using the image of the stained-glass windows that soar above the clear-glass doors of Holy Trinity Cathedral here and surround the members of the Anglican Consultative Council, Anglican Communion General Secretary Kenneth Kearon called on the ACC Oct. 29 (local time) to look outward as well as inward during the remaining 10 days of the council’s meeting.

“To meet in a place such as this can never be an ivory tower experience – we see God’s world outside, no matter which direction we turn,” Kearon said. “This building itself is a parable of the wondrous God sheltering, protecting, yet drawing us continually into conversation with the world God has created and which Jesus died to save.”

Kearon reviewed the work facing the members as they got down to business after two days of continual welcome from the Anglican Church in Aotearoa, New Zealand and Polynesia. This 15th meeting of the ACC began Oct. 27 and continues until Nov. 7.

The members are seated at round tables at the front of the cathedral nave while a head table and teleprompter have replaced the altar. Diocese of Southern Malawi Bishop James Tengatenga chairs the ACC and Elizabeth Paver, lay representative for the Church of England, is vice chair. Kearon is the secretary to ACC meetings. Those three are at the head table and Archbishop of Canterbury Rowan Williams, the president of the council, has taken a seat at one of the round tables.

Continuing with the image of the stained-glass windows above the council, Kearon suggested that just as the cathedral artists could not produce just one window to portray adequately everyone’s experience of God, the members have brought with them their own experiences and perceptions of God. “It’s only when each of us contributes our own piece of color, our own perception of God, that the full glory of God may be seen,” he said.

“Each of us will, I hope, bring our best to this meeting, but what each of us brings will at best represent an incomplete apprehension of the gospel of God; the fullness of our faith will only be expressed when together with our fellow Christians we seek ‘to give an account of the hope that is in us,’” he said, adding that answering the call to give that account can never be undertaken alone.

Kearon cautioned that often in reaction to such individual experiences “we bandy about too many labels in the church today – orthodox, biblical, conservative, catholic, evangelical, and every combination of them, and if you haven’t been labeled yourself, there’ll always be someone out there who is prepared to give you a label.”

Descriptive labels become destructive when they are used to define oneself over and against others, the general secretary said. He went on to note that “there are far too many unreflective fundamentalisms around our communion today – conservative fundamentalism, liberal fundamentalism, catholic fundamentalism – all characterized by a certainty in their own righteousness, coupled with an intolerance of the faith perspective of others with whom they differ.”

Anglicanism at its best, he said, “speaks against such narrowing of our image of God” and instead “reaches out to those with whom we differ” knowing that a “deeper and far richer understanding of God” can only come during encounters with people who are not like-minded.

By the meeting’s end on Nov. 7, Kearon said, he hoped the members will have found “a way of being together which is truly relational, truly accepting of our sisters and brothers in Christ whose faith we need in order to enhance our own.”

“We each bring our own piece of stained glass and add it to the window alongside that of others’, and so reveal the fullness of the glory of God in our broken and hurting world.”

During the remainder of the morning plenary session, the council heard about the work of the Anglican Centre in Rome and the Compass Rose Society.

The members split into self-selected groups during the afternoon to learn more about the work of the communion’s networks. That work will continue during the morning of Oct. 30, when they will also spend time learning about the Anglican Alliance, a relief, development and advocacy group begun at the ACC’s request during its last meeting in Jamaica in 2009.

The council is also due to consider resolutions from the networks Oct. 30.