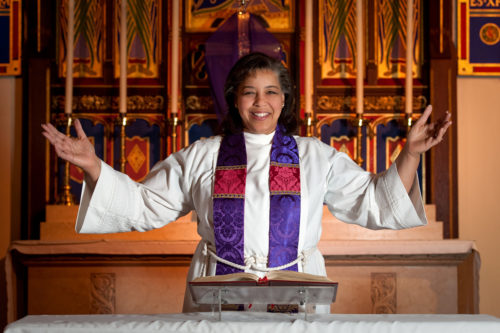 A festive prelude will begin at 6:30 p.m. with the institution service to begin at 7 p.m. A reception will follow in the Parish Hall.

The Rt. Rev. C. Wallis Ohl, provisional bishop of the Episcopal Diocese of Fort Worth, will preside.

Hughes formerly was rector of St. Peter’s Episcopal Church in Peekskill, N.Y., in the Episcopal Diocese of New York.  She is married to David Smedley.

She has deep roots in Fort Worth.  She is the daughter of Mr. and Mrs. Robert Hughes. Her father was the long-time basketball coach at Dunbar High School and her brother, Robert Hughes Jr., is the current coach. Hughes will be the second female rector in the diocese (the Rev. Susan Slaughter of St. Luke’s in the Meadow, Fort Worth, is the first) as well as the second African-American rector (the Rev. Ron Baskin, former rector of St. Simon of Cyrene, was the first).

Hughes graduated from Virginia Theological Seminary with a Master of Divinity and was ordained in 2005. She has a Bachelor of Arts in Drama from the University of Texas, Austin.  She attended Texas Christian University and Boston University. She was a Lilly Fellow at St. James Church, New York, N.Y. from 2005 to 2007. Prior to entering seminary she worked as regional training manager for the Crown Plaza Manhattan.

Trinity is one of the oldest parishes in the diocese, founded in 1893. Trinity played a central role in the reorganization of the diocese after the former bishop and other diocesan leaders left the Episcopal Church in November 2008.  Trinity hosted the February 2009 Special Convention led by Presiding Bishop Katharine Jefferts Schori, and has continued to supply leaders, both lay and clergy, to the diocese as it rebuilds in the wake of that split.