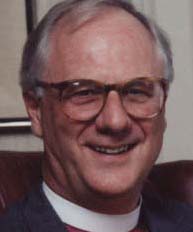 [Episcopal Diocese of Milwaukee] The Rt. Rev. Roger J. White, 71, died Aug. 28 at Froedert Memorial Hospital where he was being treated after suffering a ruptured brain aneurysm on Aug. 9. He is survived by his wife, Prudence (“Pru”) and their three children.

White was born Jan. 31, 1941, in the city of Leeds in Yorkshire, England. He was educated in the United Kingdom and ordained a priest of the Church of England in 1967. Transferring to the Episcopal Church in 1969, he was serving as rector of Trinity Episcopal Church in Indianapolis, Indiana, when he was elected in 1984 to serve the Episcopal Diocese of Milwaukee as its 10th bishop.

As bishop, his interests included Christian initiation and the catechumenate, which looked at new ways of inviting people to join in the life of the church. Clergy wellness was another focus of his ministry and he was a founding member of the Cornerstone Project which addresses this issue in the national level in the Episcopal Church.

Appointed by the presiding bishop to chair a coordinating committee charged with developing a new relationship with the Russian Orthodox Church, White traveled to Russia several times during the last years of the U.S.S.R. and the early post-communist years.

With the Rev. Richard Kew, White wrote several books dealing with the future of the church, including New Millennium, New Church (Cowley Press) and Venturing Into the New Millennium (Latimer Press).

He was very involved in the Diocese of Milwaukee’s Haiti Project, which partnered with a parish in Jennette, Haiti, to provide improved health care and education to the surrounding community.

His vision for the diocese focused on evangelism and forming people for discipleship, ministry, and service.

The Rt. Rev. Steven A. Miller, current bishop of Milwaukee, noted that “Roger served the Diocese of Milwaukee at a critical time in the life of the Episcopal Church. His focus on the ministry of all the baptized and the church’s mission to know, love, and serve Jesus in the world, were manifested by the ministries begun during his tenure as bishop. We give thanks for his life and ministry, and hold his wife Pru, and their family, in our prayers.”

Funeral services will be held at 7 p.m. on Sept. 6 at All Saints’ Cathedral (818 E. Juneau Avenue, Milwaukee, WI 53202). Visitation will precede the service beginning at 4 p.m. in the cathedral library. Interment will be in the cathedral columbarium at the conclusion of the service. The Rt. Rev. Steven A. Miller, bishop of Milwaukee, will preside.