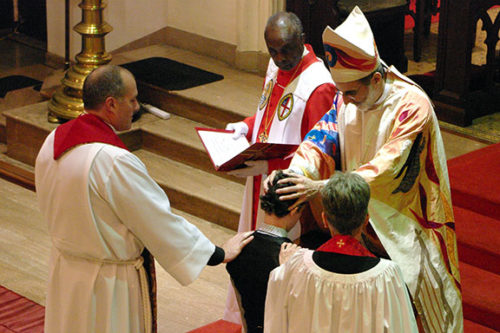 “As the (former) rector of a congregation whose average Sunday attendance was under 50, which gave me a core group of maybe 30 people, I usually found out by accident that somebody hadn’t been confirmed,” recalled Crawford, during a recent telephone interview.

She refused his resignation. “I said to him, you are one of the most faithful people I know. You already have a leadership position. You understand the church. In a small congregation I would say confirmation for leadership is an ideal but in theory and practice it doesn’t always happen,” said Crawford, a General Convention deputy from Vermont.

“With the change in theology in the 1979 prayer book, with baptism the root of everything we do, confirmation is a rite looking for a theology,” she added.

The confirmation requirement for leadership was the subject of intense conversation but not much consensus at the 77th General Convention in Indianapolis, said Deborah Stokes, a lay deputy from the Diocese of Southern Ohio.

Ultimately, General Convention rejected or referred for further conversation several resolutions proposing removal (A042, A043) or review (A044) of confirmation as a requirement for church leadership.

“We felt very strongly this was just the beginning of the conversation,” said Stokes, co-chair of the legislative committee on education, which considered the resolutions. “I didn’t want to lose confirmation, and I think all of us feared losing it if it’s not a requirement for something.”

Rather than eliminate it the proposed changes intended “to free confirmation to be a response to baptism, a pastoral response that might occur in various ways in people’s lives,” said the Rev. Ruth Meyers. The Hodges-Haynes Professor of Liturgics at the Church Divinity School of the Pacific, she consulted with the Standing Commission on Lifelong Christian Formation, (SCLCF) which authored the resolutions.

She was surprised by the reaction to the proposed changes. “People had the sense that, by taking it out of the canons, we were wanting to do away with confirmation. That’s absolutely not the case.”

Rather, the canonical changes were intended to offer options. “We could just say that baptism, with some instruction in the history and governance of the church, is really what you need for leadership” allowing confirmation to follow “as a response to baptism at a time that makes sense to you.”

Bishop Porter Taylor of Western North Carolina, SCLCF vice chair, said the changes would make the rite more a response to the movement of the Holy Spirit and less “a hoop that we have to jump through. We don’t see confirmation as part of our governance.”

“And this is not about saying I want to be a member of the Episcopal Church,” he said during a recent telephone interview. “This is about saying that God has been doing something in my life and I want to mark that by standing up in the midst of the congregation and having the bishop lay hands on me in order to mark the movement of the Holy Spirit.”

For Lillian Sauceda-Whitney, who was confirmed May 6 at St. Margaret of Scotland Church in San Juan Capistrano, California, confirmation felt like “I had finally found my home. It was like being baptized.”

Bishop Stacy Sauls, chief operating officer of the Episcopal Church confirmed the 59-year-old preschool teacher and more than a dozen others on behalf of Bishop Jon Bruno of Los Angeles.

“I had tears of joy,” Sauceda-Whitney recalled during an Aug. 23 telephone interview. “I really wanted to belong. I thought, it’s time for me to stand up and say I am an Episcopalian. I thought the only way to do that would be to join the church.”

Whether confirmation is required of church members in general and leaders in particular since it is no longer needed to receive communion, is a conversation that needs to happen organically, at all levels of the church, especially in the parish, said the Rev. Elizabeth Kaeton, a retired priest in the Diocese of Newark.

“It’s about belonging,” Kaeton said during a recent telephone interview. “I think we’re still not clear in our society and that’s reflected in our church, about what it means to belong. In the church we’re trying to figure out what it means to be an Episcopalian. We’re also struggling with what does it mean to have a public profession of faith.”

Rather than being tied to a rite of passage or an age, confirmation should be linked to a process of Christian formation,” she said. “It’s an exciting conversation. We’ve stopped talking about sex and now we’re talking about money and baptism and confirmation and marriage and these are important things.”

Another education committee member, the Rev. Charles Holt, rector of St. Peter’s Church in Lake Mary, in central Florida, said he was relieved and grateful that “none of the resolutions passed General Convention.

Had they passed, theoretically, “all one had to do to be an elected leader at the highest levels was to have taken communion three times over the course of last year” or be a communicant in good standing, he said. “Conceivably, they could not believe in Jesus Christ as their Lord and personal savior and be a leader in the Episcopal Church.”

The conversation about confirmation is essential and a healthy one because “it makes us recommit ourselves and come to clarity about our core beliefs and wrestle with our faith,” said Holt.

Holt also believes confirmation “is actually the one thing a bishop can do to help grow the Episcopal Church. In the Episcopal Church, it’s the bishop’s job to make sure that every single person who’s a member of our church has made a mature profession of faith in Jesus Christ” – a moment he believes every Christian should experience.

“If we do away with confirmation then we don’t have that moment for people,” he said.

Making confirmation a powerful and personal moment is of utmost importance for Bishop Dorsey Henderson, who retired from the Diocese of Upper South Carolina in 2009. He now assists on behalf of Bishop Gregory Brewer of Central Florida at confirmations.

Henderson confirmed about 18 people at St. Peter’s Church on May 17, including eighth grader Grant Williams, 13, who believes “confirmation is very necessary.

“It felt like I was coming closer to God, like I was getting to know him better and confirming my faith in him by showing that I truly believed in him and wanted to follow him,” he said.

Henderson said he adds the names of each confirmand to a personal notebook he has kept over 15 years of the episcopacy. “I assure them that I will pray for them regularly by name and I ask them for their prayers.”

While confirmation “is not essential to receive the sacrament of Holy Communion … it provides a kind of spiritual boost” especially to those baptized as infants and those converting from other traditions, he said during a recent telephone interview.

Bishop Dan Martins of the Diocese of Springfield, said confirmation evolved the way it did because of practical necessity—because dioceses grew and “bishops could not multi-locate.”

What began as one service including baptism followed with laying on of hands by the bishop and a prayer for the gifts of the Holy Spirit over time “was separated and priests were authorized to celebrate at the water portion, with the understanding that at some point they would bring the newly baptized to the bishop for the laying on of hands. “Eventually it took on a life of its own as a separate event and acquired the name confirmation,” he said during a recent telephone interview.

The rite may evolve, but bishops remain a symbol “of the wider church, our organic connection to church through time and space,” he added. “The prayer may change, the name we use is in flux, but … as the sacramental sign of ministry, then it’s important that everybody come under the hands of the bishop at some point in their public profession of Christian faith and discipleship.”

The Rev. Tom Woodward, a retired priest residing in New Mexico and a long-time General Convention deputy, believes baptism and confirmation should both be delayed, to about 16 and 26 respectively, to allow for more mature professions of faith.

“A child in middle school or high school who’s being baptized—his or her friends would come to that service and it’s a powerful witness of the decision to be baptized,” he said during a recent telephone interview. “Confirmation class would include a discernment of ministry and gifts, Then, when the bishop comes to invoke the Holy Spirit it would be very similar to the ordination process, adding to the dignity and power of commission of lay ministry in the world.”

Timing had everything to do with confirmation for Karen Lander, 45, and Henry Lutz, 14, also confirmed May 6 at St. Margaret’s in San Juan Capistrano by Sauls.

“I decided since I was sending my eight-year-old to her first communion classes, it was time for me to do my confirmation as well,” Lander said during a recent telephone interview. “I have to be an example to her. I needed to learn more about the church instead of just going to church.”
For Lutz, who is entering the ninth grade this year it was a communal experience. “The bishop put his hands on me, and the priests and my family did the same.

“I gained a wisdom through the whole experience. I understand what I’m doing with the Bible, what I can interpret from God and so many parts of the Episcopal Church. I interpreted it as a sign of how I’m taking my faith to a different path now, knowing that I’m getting a stronger faith and ready to do more.”