[Episcopal News Service] About one billion people read the world in a different way. According to United Nations statistics, they are 17 percent of the global population aged 15 years and above who are saddled with illiteracy, unable to read this article.

For the leaders and volunteers of Reading Camp, an Episcopal Diocese of Lexington ministry that’s gone global, illiteracy – defined by the U.N. as the inability to read and write a simple message in any language – is not an option. Educating and empowering the next generation, instilling self-confidence and creating new opportunities are among the program’s main objectives.

The Rev. Joseph Ngijoe and his wife Clemence from the Anglican Church in Cameroon had dreamed of building an international partnership to help children who are struggling to read and write in the West African country, where 1 in 4 people, out of a population of 20 million, are illiterate.

Friendships forged in 2009 – while studying at Church Divinity School of the Pacific in Berkeley, California – paved the way for the Ngijoes’ dream to become reality. Reading Camp Cameroon was born in mid-June this year with a week-long pilot program held in Tiko, bringing together Episcopal Church ambassadors from the United States and a team of Cameroonian teachers, all volunteers.

Clemence Ngijoe described the program as a creative and vital tool to breaking the cycle of poverty and ignorance.

“We know that ignorance is a blockade to social development and that reading is a foundation for knowledge. A person who does not read is like a blind person and is limited in all aspects of life,” she told ENS. “Reading shares love, care and blessings in the family, at school, in the community and in the world. It is a ministry of God’s love, compassion and self-discovery.”

“A well-educated child will contribute immensely to society,” she said. “Reading Camp assists children not only to learn but also to develop self-confidence.” 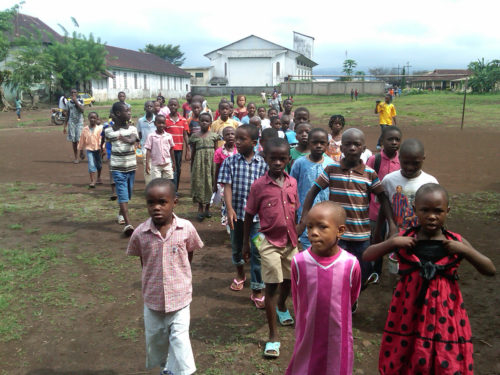 About 45 children, aged 8-11, arrive for another day at Reading Camp Cameroon. Photo/Petero Sabune

The three lay ambassadors, from the dioceses of Atlanta, Lexington and Ohio, joined the Ngijoes and more than 20 local teachers in delivering the program to about 45 campers, mostly aged 8-11, in Cameroon.

Joanne Ratliff, a senior lecturer in language and literacy at the University of Georgia, described it as one of the most spiritual experiences of her life.

She said that the teachers and children who participated in the camp “were a blessing to me on a professional and personal level … The children brought joy to my soul showing their love of learning. All came with an open heart and an open mind.”

In contrast to the United States, many Cameroonian schools have “up to four times as many students in classrooms with wooden benches, a chalkboard and chalk, and little else,” Ratliff explained. “The school building we worked in was described as a good school, but probably would have been condemned in the U.S.”

Twenty-one teachers showed up every day for no pay during their school holiday, Ratliff said. “They worked with children all morning and then came and worked with me for another hour. I never heard a single complaint. In fact, their gratitude was overwhelming.” 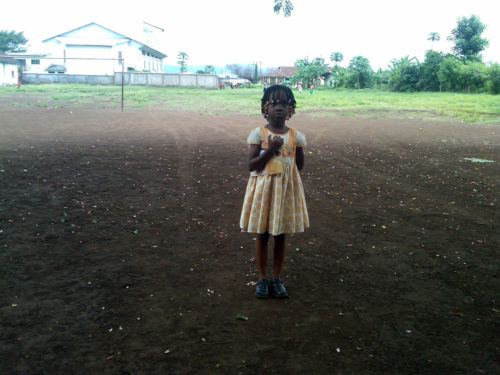 Beauty showed up every day with her book tucked under her arm. She wanted to read, but she was too young to join this year’s program. Maybe next year. Photo/Petero Sabune

Carolyn Hockey, 19, from Cleveland, in the Diocese of Ohio, said that Reading Camp Cameroon was so successful that other children in the neighborhood “tried to sneak into camp, seeing how much fun everyone was having, and how much they were learning.”

Hockey spent five years volunteering and counseling at camps in Lexington and helped to launch the first Reading Camp in the Diocese of Ohio, at her home parish of St. Paul’s Episcopal Church in Cleveland Heights. She said she feels “most connected with God” when she’s at Reading Camp.

“It’s not just a literacy program. It’s about building the self-confidence that young people need, particularly those who are struggling with reading. Gaining the confidence to try is half the struggle of reading for a lot of children,” said Hockey, who is spending the summer in Cameroon before beginning to study political science and religious studies at the College of Wooster in Ohio.

“Another beautiful thing about Reading Camp is that it enriches the lives of everyone involved,” she added.

Allissa Ferguson, 25, agreed. “Doing Reading Camp gives me hope,” she said. “I have seen the transformation that happens in the children and it reminds me that God does move in the world. I have also felt that transformation in my own life. At first I didn’t realize how special it was, but now after several years I see that Reading Camp is like a ‘mountain top experience’ like those mentioned in the Bible.”

Originally from Nashville, Tennessee, Ferguson began volunteering for Reading Camp while studying at the University of Kentucky in the Diocese of Lexington. She got involved in the university’s campus ministry, and joined the Episcopal Church in her freshman year.

Ferguson said the experience “creates space for the Holy Spirit and empowers me to stay positive even when I am frustrated. The kids themselves are a huge inspiration for me. Their hard work shows me that what we do really works and that anything is possible.” 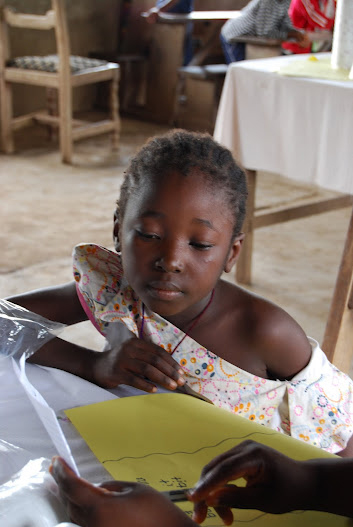 One of the 45 children, aged 8-11, who attended Reading Camp Cameroon. Photo/Carolyn Hockey

Reading Camp, Ferguson said, also represents a new beginning. “We don’t just teach reading skills; we create a safe, loving space for [the children] to grow and then give them the tools to do it. It is about a transformation that they can carry with them for the rest of their lives.”

Hockey described the Cameroonian teachers and camp volunteers as dreamers, noting that they are already talking about expanding the camp to include five different weeks next year.

“If anyone can do it, it’s them. They are so driven,” Hockey said.

“To see, hear and experience the joy of the team in Cameroon was amazing. It was nothing short of a miracle,” he said. “Watching children come and adults welcome them to read was what we all waited for each and every day. To read and be read to is heavenly. I imagine heaven is where you have all the books and all the time.”

The journey that led to Reading Camp Cameroon began in 2002 when former Bishop of Lexington Stacy Sauls, now the Episcopal Church’s chief operating officer, “dreamed of a program that would bring together the resources of the diocese … to address some of the region’s most pressing problems: illiteracy, poverty, and the general malaise and hopelessness that accompany them,” Allison Duvall, executive director of Reading Camp, told ENS.

According to a federal study published in 2009, an estimated 32 million adults — about one in seven — in the United States have such low literacy skills that they would be unable to understand the instructions on a pill bottle.

Identifying a “below basic” level of literacy in third and fourth graders can help to halt or reverse those numbers.

Reading Camp volunteers communicate with school systems, asking teachers to nominate struggling students who are at least one grade level behind in reading to attend the program, Duvall said.

During camp, she said that each child receives more than 15 hours of personalized remedial literacy instruction in small groups or one-on-one with trained teachers and volunteers.

In addition to bolstering their reading skills, the children “enjoy afternoon activities that are structured to build confidence, self-awareness, and develop strong characters, all the while incorporating life skills and interdisciplinary learning,” said Duvall. “Campers learn to swim, ride a horse, or rappel down a cliff face – and these successes transform their approach to learning to read.”

By 2008, Reading Camps had been held at eight different sites in the Diocese of Lexington, as well as in Iowa, Ohio, Virginia, and South Africa.

The South Africa program, launched in Grahamstown in 2007, is still going strong five years later and local leaders are talking about spreading Reading Camp to the other dioceses in the Anglican Church of Southern Africa.

One of the most pressing problems, Duvall said, has been in creating a sustainable growth model, “which would assist others in starting their own Reading Camps without detracting from the funding or quality of programs in the Diocese of Lexington.”

In response, the Reading Camp Network was established to support the expansion and growth of the ministry throughout the United States and the rest of the world, said Duvall.

Churches and organizations that wish to start a literacy program based on the Reading Camp model can now join the network and access the training resources.

Whether held in Lexington, Cleveland, South Africa or Cameroon, the Reading Camp volunteers describe the experience as being transformational for all participants, children and volunteers alike.

Abbey Clough, a young adult volunteer at the Pine Mountain Reading Camp that was held in late July in Kentucky, said that it has been a vehicle for her own “vocational discernment … [It] sheds away some emotional brick walls that I put up.”

She said that the children have opened up her heart and the volunteers have become like brothers and sisters.

Clough, 19, a member of St. Paul’s Episcopal Church in Cleveland Heights, spoke about two former campers who now volunteer at Reading Camp as junior counselors. “They showed up not able to say the alphabet or write their own names four years ago,” she said. “Now they’re junior counselors who are no longer living with emotional brick walls. They were so closed off when they first came here. Now, they watch out for the other kids. [It’s] a concrete example of … the effect that Reading Camp has on people … Those two have melted the hearts of the people who have been on this staff for the last four years.  We are so invested in them.”

Clough is one of the many young adult counselors who volunteer their time to Reading Camp every year, often paying their own way to join one of the programs.

Meanwhile, Cameroon’s Clemence Ngijoe is just grateful that the camp has built on its successes in the United States to broaden the program globally. She said she values deeply the friendships that have been built “within our communities and far away” through the program.

“We now form a very large international family,” she said. “This has once more taught us about the notion of Ubuntu (an African concept meaning ‘I am what I am because of who we all are’) and oneness despite our cultural or geographical differences.”