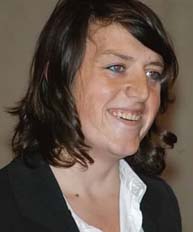 [The Chapel Hill News] I grew up a Southern Baptist.

That meant making a personal decision to follow Jesus, the right of all people to make their own choices about their beliefs. It meant my grandparents were missionaries; my great grandfather was a minister. It meant arguing about God with my Jewish best friend in elementary school. It meant a Savior I could talk to; whom I could tell I was actually a girl, to whom I could turn when I couldn’t turn to others.

I joined my church’s youth group as a teenager. We met in the church’s basement. Our new youth minister was engaging and excited about the ministry. Instead of lots of cookouts and pool parties, we had retreats, books, and disciplines. Instead of a place to hang out, we had goals. There were lessons about the “proper” role of women, why evolution was wrong and dangerous, how to recognize signs of the end times, how to stop Abortion (not abortions, of course, that might have required mentioning condoms), and even how to evangelize to Mormons.

Retreats were the program’s cornerstone. There were weeklong camps at colleges in western North Carolina. One sticks in my memory. It was the summer before my senior year of high school. Some of that week was wonderful: games, picking up trash along the Catawba River, that first taste of a college’s freedom. Some of that week was less comfortable.

There were a couple of hours a day for Praise and Worship. Flashing lights and pumping beats were meant to excite joy and engagement. It wasn’t the sort of theology one considered or discerned how to live into; it was the sort you shouted and sang back to folks doing the same.
The retreat leader gave two sermons a day, all week long. They were the sort where you were encouraged to take notes for later study. The sermons were full of warnings about heroin use, child molestation, and murder all mixed up with talk about homosexuality, atheism, science, agnosticism and “liberalized” Christianity.

One night near the end of the week, the preacher started hammering away at those felt called to ministry. “If you find yourself feeling any attraction to someone of the same sex, or have any questions about your gender identity,” he warned, “stay away from ministry; it doesn’t need you. Until you take care of it, you’re a liability.”

After the sermon, we were told there were ministers waiting at the back of the auditorium if we needed to confess anything, if we needed to ask for forgiveness and pray with someone.

I got up and walked to the back of the room, tears running down my face. A young seminarian put his hand on my back and asked if I wanted to step into another room to talk. We walked down the hall to an empty classroom.

So what’s going on, he asked.

I think I’m gay, I said. I knew I wasn’t exactly gay, but it felt close and easier to explain. The seminarian didn’t look surprised or angry like I had expected, just heartbroken.

At first he sounded scripted, asking if I was looking at pornography online or was involved with anyone. Then, he stopped and looked at how upset and scared I was. Look, he said, are you going to hurt yourself?

If I could dig it out or burn it out I probably would, I told him.

The seminarian said these things quietly, in a frightened voice, as if he was slipping a starving person contraband bread. We prayed. And I went back to my group.

I never knew his name. Still, even though he was conflicted, maybe as deeply as I was, he came through and was a minister, someone who did Christ’s work of love and acceptance in the world. In the years since, I’ve left the Baptists, but I’ve never left that moment of knowing that whatever I might be, I am loved by both my Creator and many of my sisters and brothers in this world. That’s made all the difference.

–– Viv Taylor graduated from UNC-Chapel Hill, served as a chaplain’s assistant in Iraq and wrote about the experience as Sam Taylor for The Chapel Hill News from 2010-12. This is the first in a series of new columns about her transgender journey and is reprinted here with the author’s permission. Taylor is a member of St. Paul’s Episcopal Church in Brookline, Massachusetts.