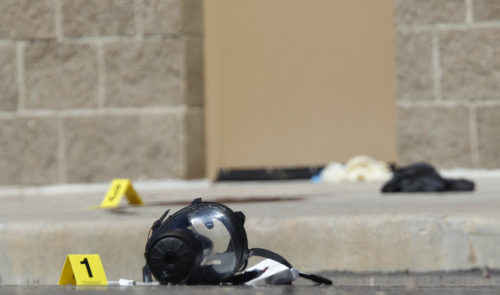 Yellow markers sit next to evidence, including a gas mask, as police investigate the scene outside the Century 16 movie theater in Aurora, Colo. on July 20. A gunman in a gas mask barged into a crowded Denver-area theater during a midnight showing of the Batman movie, hurled a gas canister and then opened fire in one of the deadliest mass shootings in recent U.S. history. AP Photo/David Zalubowski

[Episcopal News Service] Episcopalians and others are reacting to what one called the “empty evil” of the mass shootings in a Denver-area movie theater just after midnight July 20.

The Rev. Gary R. Brower, an Episcopal priest and university chaplain at the University of Denver, told Episcopal News Service via e-mail June 20 that “given the deep wounds of Columbine, this particular tragedy hits us all pretty hard. And, of course, we’ve been reeling from the loss of hundreds of homes in recent forest fires. This has been a difficult summer.”

Brower was referring to the mass shooting April 20, 1999, at a high school in Columbine, Colorado, about 17 miles southwest of Aurora where the latest shooting took place. At Columbine two students killed two classmates and one teacher and wounded another 21 students before committing suicide.

Brower, who lives several miles from the movie theater, said he is not sure yet if anyone his family knows or anyone connected with the university was affected by the shootings. However, “given the number of faculty, staff and students who live in Aurora, I can’t imagine that ‘six degrees of separation’ will describe the impact,” he said.

A gunman in a gas mask barged into the crowded theater during a midnight showing of the new Batman movie Friday, hurled a gas canister and then opened fire, killing 12 people and injuring at least 50 others in one of the deadliest mass shootings in recent U.S. history, the Associated Press reported.

When the smoke began to spread, some moviegoers thought it was a stunt that was part of the “The Dark Knight Rises,” one of the most highly anticipated films of the summer, according to the AP. They saw a silhouette of a person in the haze near the screen, pointing a gun at the crowd and then shooting.

James Holmes, 24, was taken into custody near a car behind the 16-screen theater. Holmes was studying neuroscience in a Ph.D. program at the University of Colorado-Denver, university spokeswoman Jacque Montgomery said, adding that he enrolled a year ago and was in the process of withdrawing at the time of the shootings.

“At times like these, our emotions come swirling to the surface, with all our questions: shock, anger, grief, wonderment; why did this happen? How could it have been prevented? What does it mean? Where was God?” St. John’s Cathedral, the Episcopal Church cathedral in Denver, said in a statement on its home page.

“There are no easy answers. This shooting is a terrible tragedy, and it is a great loss that senseless killing has become a part of our national life in recent decades. Yet this is not an occasion to abandon hope,” the statement said. “It is not an occasion to break faith. It is rather an occasion to renew our commitment to love: to love our neighbors, both close and distant, who are suffering; to love our enemies, who have wounded us so grievously; and to love God, who does not abandon us in tragedy, but chose to enter death itself, that life might be wrested from bondage in the tomb.”

The Rev. Dr. Francis H. Wade, interim dean of Washington National Cathedral, said that “the people of Colorado continue to be on our minds following the recent shooting in Aurora.”

“This empty evil adds to a series of violent acts that weigh heavily on the national consciousness, acts that must surely occasion focused discussion on the interplay of violence and the availability of guns,” he said. “This moment also calls for prayer. Our prayers at the National Cathedral today will mourn the fallen — and we will continue to remember those injured, along with their communities, as we renew our calls for healing and peace.”

Meanwhile, Kathryn Lohre, the president of the National Council of Churches, said Christians across the nation are “surrounding the community of Aurora, Colorado” in prayer.

She also called upon elected officials at every level of government to “seek policies that will foster greater peace in our communities and throughout this country.”

“May God bring comfort and healing to all, including the families of those who have been injured and killed,” Lohre said, “and also to the alleged gunman and his family.”

At its recently concluded 77th General Convention, the Episcopal Church continued its opposition to gun violence by approving Resolution D003, which “requests every parish and every diocesan place of work to declare their establishments as Gun Free Zones.”

The resolution’s explanation notes that some states allow people to bring weapons into churches under varying conditions, while others have outlawed the practice.

“Laws vary from state to state, but posting Gun Free Zone decals is one way for parishes and dioceses to exercise private property rights on behalf of community safety,” the explanation said.
“Posting of this status shall be easily visible for parishioners, staff and visitors to see as they enter the building.”

The church’s stance dates to at least 1976 when General Convention called on Congress to adopt effective hand gun legislation “as promptly as possible.”

In 2000 the convention passed Resolution D004, which expressed its “deep concern about the repeated use of easily available hand guns and assault weapons by and against children.” The resolution called upon Episcopalians to “seek ways to develop community strategies and create sanctuaries for our children, so that all may come to identify and value themselves and others as the precious children of God that they are, and that they may come to know peace in their lives and to create peace for future generations.”

Also in 2000 the convention passed a resolution (B007) that called upon all members of the church to “work intentionally in their several committees, legislatures, and institutions toward the removal of handguns and assault weapons from our homes, other residential communities, and vehicles.”