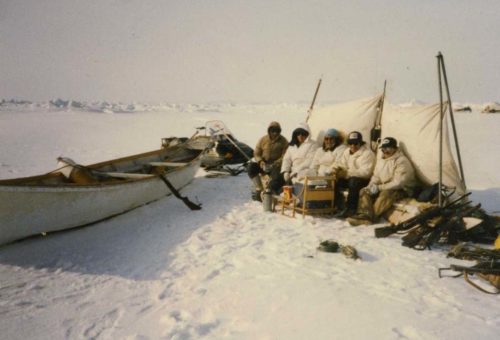 Kivalina is the only village in Alaska’s Northwest Arctic Borough region where people hunt the bowhead whale, a cultural tradition and dietary mainstay that has been severely hampered by the thinning ice. Once, hunters camped on the ice for weeks at a time; now, they stay only a few days and mostly look for whales that have strayed from the herd. This historic photo shows a whaling team and was provided courtesy of Janet Mitchell.

[Episcopal News Service] In the past 20 years the state of Iowa has experienced three crisis-level floods, the latest, in 2008, put nearly a third of the state underwater.

“It was a 500 year flood, causing $60 billion in damages,” said the Very Rev. Cathleen Bascom, dean of the Cathedral Church of St. Paul in downtown Des Moines, adding that the frequency of the floods “is what opened our eyes to the climate change issue.”

The cathedral, which sits on High Street along with the four other remaining “old churches,” weathered the storms, but the low-lying areas – mostly home to low-income residents and immigrants – “suffered the most,” she said.

“One of the economic justice issues I was made aware of following the flood was that the levee above Birdland [a low-lying neighborhood in north Des Moines] was allowed to remain weak, so it broke,” said Bascom, adding that areas downriver, including the city’s financial district, have experienced re-gentrification. “So the water, then, was not a threat to higher income properties.”

Bascom, an Iowa deputy to the 77th General Convention in Indianapolis July 3-13, testified before the National and International Concerns Committee in Indianapolis on behalf of a resolution to address environmental justice (B023).

In a post-convention telephone interview with ENS, Bascom said one of the things she really liked about the resolution was its call to action, which implores institutions, the church, dioceses and congregations “to support to implementation of grassroots, community-based solutions to climate change,” including ecological restoration, promoting food sovereignty and making local adaptations toward resilience. The latter being something the cathedral has done already by mitigating storm-water runoff.

Replacing dilapidated asphalt with permeable pavement and a filtration system, the cathedral has the capacity to keep 12 swimming pools worth of water out the storm-sewer system and out of the river, Bascom said. The cathedral also planted a garden, including native-plant species like prairie grasses, that is irrigated by the water. The garden also serves as a “welcome mat” and place of respite for nearby workers and a conservation laboratory for urban children, she added.

In addition to B023, General Convention passed Resolution D055, which advocates for public policy to reduce climate-change emissions. Both B023 and D055, in addition to previous general convention resolutions, form the basis for the church’s environmental and economic justice work in the coming triennium.

“To me, two of the issues about which the church is called to be more and more visible and proactive are climate change and poverty/economic inequity,” said Michael Schut, the Episcopal Church’s officer for environmental and economic affairs. “Resolution B023 calls us to ‘resist the development and expansion of ever more unconventional, dangerous, and environmentally destructive sources of fossil fuel.'”

“That resistance may mean we need to be out on the streets in peaceful protest of such efforts. Such resistance obviously answers the call to be more proactive about climate change. But the resolution recognizes that in such resistance the church must support those who might lose their jobs in the transition from a fossil-fuel-based economy to a clean energy economy… which answers the call to address poverty.”

Balancing the need to protect the environment while simultaneously working to alleviate poverty, however, can often leave Episcopalians in the trenches feeling at odds, especially in states like Pennsylvania where the unemployment rate is high and where generations have made a living working in the mines and the oil and gas fields.

“Finding the social justice right mix representing the church’s good stewardship of the environment and its love and concern for people and to mitigate poverty is not an easy path,” said Joan Gundersen, who served as a deputy of the Diocese of Pittsburgh and on convention’s National and International Concerns Committee, in a July 17 interview with Episcopal News Service.

In Pittsburgh, the diocese has a “double concern,” Gundersen said: “Of course we are interested in the environment, and making sure that whatever is done, is done safely, but we are also cognizant of the high unemployment rates and the hunger for jobs.”

Pittsburgh sits over the Marcellus Shale, an enormous natural gas reserve lying a mile beneath the surface and covering an area from New York through parts of Pennsylvania into Ohio and West Virginia. Given its location near major population centers in the eastern United States, some see the Marcellus as ripe for development.

In 2010, the city of Pittsburgh voted to ban corporations from drilling for natural gas, including hydraulic fracking, within the city limits. The diocese, which includes rural, high-unemployment areas like Northern Cambria, hasn’t taken a position on fracking and hasn’t had a “deep conversation” on the matter, said Gundersen. In addition, General Convention discharged a resolution to “oppose dangerous fracking.”

During a hearing on Resolution D055, Gundersen testified that selling the resolution in Pittsburgh might not be difficult, but the same wouldn’t hold true in surrounding rural areas.

“When you’re in the countryside where 39 percent of the population is unemployed and these fuels are their livelihood,” she said. “… How do you sell it in the rural depressed coal mining areas?”

Unlike in West Virginia, where the state receives a bigger cut of the profits generated from resource extraction, which it can use to repair roads and for environmental restoration projects, Pennsylvania where infrastructure and regulation have lagged doesn’t receive the same revenue. And depending on where you are in Pennsylvania, reaction is mixed regarding environmental contamination, the extent and its existence, she said.

A natural gas processing plant, Gundersen added, is poised to open along the Pennsylvania-Ohio border, bringing at least 2,000 jobs to the area.

Resolution D055’s explanation states: “… Other costs of fossil fuels include oil spills, contamination of ground water with mercury and other pollutants from coal mining, and accumulation of improperly stored radioactive waste as a result of hydrofracking. There are many concomitant health care costs from our exposure to these pollutants…”

It continues, “The continued use of fossil fuels is not sustainable.”

Also during the testimony, the Rev. Barbara Schlachter, a visitor to convention from the Diocese of Iowa who helped found Iowa City Climate Activists, called attention to the real costs of low-cost fuels, as pointed out in the resolution’s explanation, and called for support for renewable energy sources. Schlachter said reducing reliance of fossil fuels is a “moral issue.”

“What is going to happen to our environment, our atmosphere,” she asked. “It’s [climate change] has already come to some parts, and it’s coming here.”

During his testimony on B023 before the committee, Austin Swan Sr., a deputy from the Diocese of Alaska, and a resident of Kivalina, an Inupiaq island-community where climate change threatens the community’s continued existence, shared his experience.

“I am a lifetime resident of Kivalina, born and raised there. When I was a child, we had probably two-thirds more land and now have 35 percent of that land, all this loss due to erosion mostly in the last four or five years,” he said.

And despite living in an environment rich in natural resources, including the world’s largest zinc mine located upriver, Swans said: “We still live in third world conditions. Where does that money go?”

Proposed by Alaska Bishop Mark Lattime, the resolution resolves “That the 77th General Convention of The Episcopal Church stands in solidarity with those communities who bear the greatest burdens of global climate change: indigenous peoples, subsistence communities, communities of color, and persons living in depravation around the world…”

The village of Kivalina sits on the tip of a six- to eight-mile-long barrier island – a quarter-mile at its widest – some 80 to 120 miles above the Arctic Circle between the Chukchi Sea and the Kivalina Lagoon in Alaska. It is home to about 400 people and reachable only by plane and boat in the summer and plane, and snowmobile in winter.

Of the 200 native coastal communities in Alaska, varying degrees of erosion affect about 180 of them, according to the federal government’s General Accounting Office. The U.S. Army Corps of Engineers has said that Kivalina is one of three native communities in need of relocation.
As explained in the resolution’s explanation, Kivalina “has been ever-increasingly at risk because of global climate change. Loss of sea ice has led to increased coastal erosion, land failure, and unreliable, if not perilous, conditions for the practice of subsistence hunting.”

In 2008, the village of Kivalina filed a lawsuit against 24 oil, electricity and coal companies, including Exxon Mobile Corp., Conoco Phillips and BP. The claim alleges that, as significant contributors to greenhouse-gas emissions, the corporations have exacerbated global warming, thereby accelerating erosion in Kivalina and leaving the island vulnerable to storm surge and flooding.

Further, the resolution’s explanation stated, that Shell Oil was set this month to begin oil exploration in the Chukchi Sea, “the deepest source of Inupaiq food, cultural identity and spirituality alike.”

California Bishop Marc Andrus, who endorsed B023 and sat on the National and International Concerns Committee, said the people of Kivalina “identify with the island and its surroundings,” and to move is not as simple as moving from Alabama to San Francisco, as he did when he became bishop.

Not unlike with the Guarani, a formally nomadic indigenous tribe in Brazil that has lost much of its ancestral land, for the people of Kivalina to move, “is a kind of death,” he said.

While at convention, hearing the stories of the Guarani and the situation in Kivalina, who are in “much more extreme” situations, reminded Bascom, she later said, of a lecture Archbishop of Canterbury Rowan Williams once gave called “Renewing the Face of the Earth: Human Responsibility and the Environment,” in which he said:

“It is possible to argue about the exact degree to which human intervention is responsible for these phenomena … but it is not possible rationally to deny what the inhabitants of low-lying territories in the world routinely face as the most imminent threat to their lives and livelihoods.”