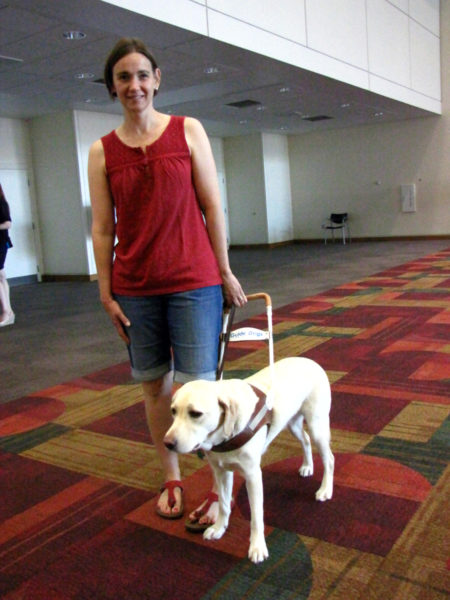 Darla Schumm of Roanoke, Virginia, who is visually impaired and attended General Convention as a visitor with her guide dog Chloe. Photo/Sharon Sheridan

[Episcopal News Service — Indianapolis] General Convention has approved new rites and prayers for the care of beloved animals in passing Resolution A054 on July 12.

The Prayer Book, Liturgy and Church Music Committee had heard impassioned testimony about the need for the animal liturgies. The resolution recommends the liturgies be made available “for use in a variety of settings to provide pastorally for people caring for animals,” and the committee revised the format to make it easier for worshipers to use at home.

“We really feel it’s important to try to get something to the houses to decide about this because not only was there moving testimony to this committee at this General Convention but also to the previous General Convention,” said the Rev. Ruth Kirk, deputy of the Diocese of Delaware. “Not everyone feels skilled to create the liturgy for Fluffy in their backyard.”

During debate in the House of Bishops, Mississippi Bishop Duncan Gray asked why there was a call to authorize such rites.

“There has been a steady, dare I say, unrelenting call for rites like these,” said Bishop George Wayne Smith of Missouri, chair of the legislative committee.

“I’m a convert about this stuff,” said Bishop Jeffrey Lee of Chicago, another committee member. “Part of the reason for providing something is because of … the wide range of materials that were presented to us in use out there, and we wanted to something that was responsible.”

The bishops changed the resolution’s wording to make the materials available rather than to “authorize” them.

“That seemed like a friendly amendment to me and will be well received by the animals of the Episcopal Church,” said the Rev. Lowell Grisham of Arkansas, deputy committee chair.

The bishops’ debate had some lighthearted moments, with Presiding Bishop Katharine Jefferts Schori, a former oceanographer, commenting, “I’m glad to see the whales made it in,” and Bishop C. Franklin Brookhart Jr. of Montana telling the house, “No one loves his dog more than I.”

The convention referred proposed Liturgical Materials Honoring God in Creation (Resolution A053) to the SCLM for additional work before the next General Convention.

— Sharon Sheridan is a member of the Episcopal News Service team at General Convention. The Rev. Pat McCaughan, also part of the news team, contributed to this article.