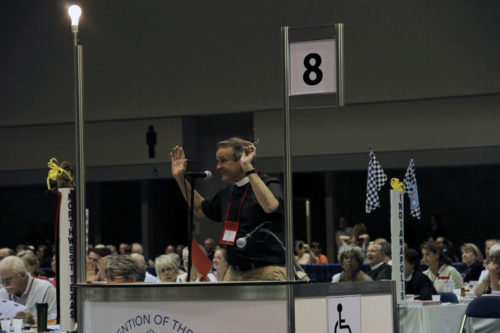 The Very Rev. John B. Burwell, deputy of South Carolina, stands up in the House of Deputies on the afternoon of July 11 to tell his fellow deputies that South Carolina is still part of General Convention ENS photo/Lynette Wilson

[Episcopal News Service – Indianapolis] The majority of the Diocese of South Carolina’s deputies left the General Convention July 11 because, in the words of its remaining clergy deputy, the gathering has passed resolutions that violate the doctrine, discipline and worship of the Episcopal Church.

However, that deputy, the Very Rev. John B. Burwell, told Episcopal News Service in an interview after the House of Deputies’ last session of the day that “we are not leaving the Episcopal Church.”

In fact, the deputation chose to have him and Deputy Lonnie Hamilton “stay until the bitter end” to make that point.

The resolutions concerned are A049, which allows for optional and provisional use of a rite to bless same-gender relationships, and D019 and D002, which affirm the full inclusion of transgender persons in the life of the church (including the ordination process).

The blessing resolution, Burwell said, “basically flaunts the canons of the church” because Canon I.2 (b) defines marriage as a “physical and spiritual union of a man and a woman.”

The resolution and the rite do not refer to the action allowed as a “marriage.”

“Why didn’t we throw out the canon?” Burwell asked. “Let’s be honest about this. If that is the direction that we’d like to head into, then let’s not break laws.”

Burwell said he agreed with the sentiments of another deputy during the debate on the gender-identity resolutions who said he longed for the day when people are judged for who they are and not the labels that others give them.

However, “it’s unnecessary and it’s unbiblical and it’s un-Anglican” to make the statements made in the two resolutions, he said.

Burwell said the deputies cannot agree with the resolutions. We won’t agree with them and they will do damage, not only to South Carolina but also to parts of the Anglican Communion many, many miles from here,” he said.

The deputies believe that the resolutions “make fundamental changes to the worship, doctrine and discipline of the Episcopal Church, which we, especially as priests, are sworn to uphold,” Burwell said.

“Because of this we simply can’t, as the diocesan deputation, act like nothing has happened,” he added. “This may not be the end of the world, but this is significant and we can’t act like business as usual.”

Burwell said the deputies decided after the voting on July 10 to leave, explaining that they thought the convention took a turn that afternoon. Things “went downhill and from our perspective it was a downhill slide. By the end of the evening many in our deputation, many but not all, were demoralized,” he said.

The deputies “decided that these resolutions that passed do not represent the Diocese of South Carolina [which] we were deputized to represent and therefore we cannot act like its business as normal and just go about a normal day today like we did yesterday.”

Convention observers began to note the absence of South Carolina deputies shortly after the house reconvened for the afternoon at 2:15 p.m. EDT. The deputies posted a short statement on the diocesan website about a half hour later announcing their decision.

Burwell insisted that “this was the deputies’ decision, not the bishop’s.”

As of 6:50 p.m. July 11, Lawrence was still at convention, he said, despite some reports that he had left.