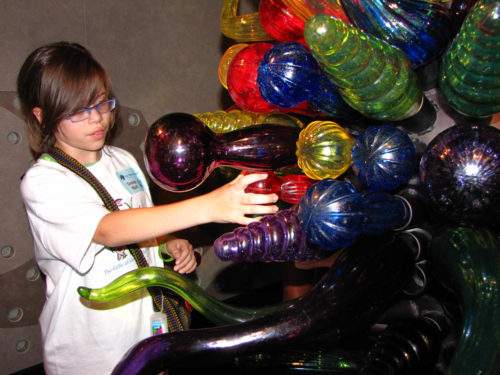 Josie DeJesus, 10, said she loved everything about the Children’s Museum of Indianapolis. Here, she tries creating her own colorful work of art in an interactive exhibit as part of a display of blown-glass sculptures. Photo/Sharon Sheridan

[Episcopal News Service — Indianapolis] They’re unlikely to sneak up on you. From “Rise and Shine” while they’re washing their hands to “Will the Circle be Unbroken” as they march down the hallway, camp songs herald the presence of General Convention’s children and their counselors.

While their parents and guardians have conducted the business of convention, infants through fifth-graders have participated in their own childcare and Christian formation program. The children’s ministries programs of the Episcopal Church and the Diocese of Indianapolis partnered with the diocese’s Waycross Camp and Conference Center, Episcopal Relief & Development and National Episcopal Health Ministries to offer the children’s program, which youngsters can attend for all or part of convention.

As of the afternoon of July 7, about 30 had participated in some way, said Coordinator Caren Miles, director of children’s and family ministries at Church of the Heavenly Rest in New York.

The program staff included experienced counselors and child-care professionals plus teens in training to become camp counselors. At Waycross, future counselors can take “leader in training” instruction, followed by a “counselor in training” program that includes hands-on work as a junior counselor, explained counselor Sean Cole.

Miles’ goal in the program, she said, is for the children to feel that “this is my church and I belong at every level” and that they are “important enough for there to be something keyed to who they are right now, much like the [Official] Youth Presence is tailored to teens.”

“We’re talking about growth and everything around that when we’re in group time,” Miles said.

One day, for example, they discussed the parable of the sower and listened to the Godly Play story of the mustard seed.

The preschoolers did a dirt experiment, mixing various kinds of soil, rocks and water. “We shook it up, made it all mucky,” then waited for it to settle and separate into layers, said volunteer Beth Jeglum, who ran a university childcare program in Indianapolis for 25 years.

The convention program also included field trips to Waycross and the Children’s Museum of Indianapolis for the older children.

The museum, said Josie DeJesus, 10, of Peoria, Illinois, was “awesometastick.”

“Everything,” Josie replied. “I can’t choose.”

Clearly, the museum was fun. But did it remind them of God?

“In this room, not exactly because they’re talking about war with cannons and other gods, the pharaoh gods, when God says he’s the only God and to make peace,” said Robert Sanchez, 10, of Carmel, Indiana. But in the museum as a whole, yes. “It’s generating knowledge.”

For 11-year-old Ryleigh Webley of Wyoming, Michigan, God was present in an exhibit about the herbs of Egypt. “They make me think about [how] some herbs will help the sick,” she said. “God can help treat people.”

Before visiting the museum, the group ate lunch at Christ Church Cathedral. Program participants attend convention’s daily worship, and the counselors and older children discussed that day’s service during lunch.

“I thought the [steel drum] band was really sweet because it’s not something you’d ever have in a church, at least my church,” said one girl.

“That’s funny. That was my least-favorite part,” said Miles, noting one of the great things about the church is that people can enjoy different things.

“I liked reading,” said Robert, who had his first experience ever as church lector when he read one of the lessons.

He also volunteered to bless the lunch: “God, thank you for this food, for everything you will give to us today. Amen.”

Robert later confessed he initially was nervous about reading aloud in church, but he took his mom’s advice. “She told me that I’m doing it for God and that I didn’t really have to worry about anyone else. It felt good.”

“I thought the priest was funny,” she said. “We normally don’t have priests like that at my church.”

Robert and Gloria were among seven children on the museum trip, along with 10 teens receiving leadership training and three older supervisors.

“It seems like the teenagers are getting just as much from their time with kids who just adore them,” Miles said. “I’ve just always loved to watch teenagers spend time with people who adore them and look up to them.”

Emma Nickel, 16, of Indianapolis will be a Waycross counselor in training next year. She volunteered for the children’s program, she said, because “I wanted to help out, and I thought it would be really fun. … I love kids. I like being out with them, and it helps prepare me for when I am a counselor at camp.”

Nickel is a youth steering committee member in the Diocese of Indianapolis, helping plan fall and spring retreats.

“I have found most of my faith since I’ve been going to camp and being with other people, and just the way we’ve been able to learn about God has been easier to understand than just going to church,” she said. “I think it’s because they know how to talk to kids.”

With the convention’s children, she’s fulfilling a similar role as those camp counselors who worked with her at camp. “We have learned how to learn about God and share that with them.”

Said Segner, who turns 18 at the end of this month, “I definitely feel a spiritual connection with the kids. It’s nice seeing the younger kids having fun with their faith. It’s not just something they do in church. It’s also something they live and have fun with in their day-to-day life.

“I’m really happy to be part of that.”