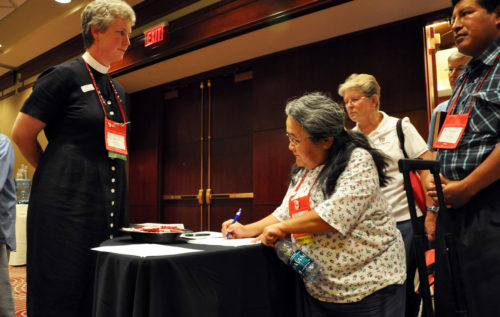 [Episcopal News Service – Indianapolis] The Episcopal Church’s Joint Standing Committee on Program, Budget and Finance held its last hearing – one on spending – on the evening of July 7.

The committee, which is now two days away from the deadline for it to propose a budget for the church’s 2013-2015 triennium, heard from many of a long line of witnesses that snaked down the hallway of the Indianapolis Marriott Downtown. PB&F extended the hearing for a half hour in order to hear from more people.

What the members heard were requests that they include money for the program or ministry that each witness advocated. Those requests ranged from pleas for funding of what one witness called “life-saving work” to what another said was a “measly” amount of money to update the e-mail system at the church center in New York.

Deputy Dave Bailly, of North Dakota, told the committee that the money the church has given his diocese in the past “saves lives every day” by enabling the church to form partnerships and reach out to impoverished Indians. 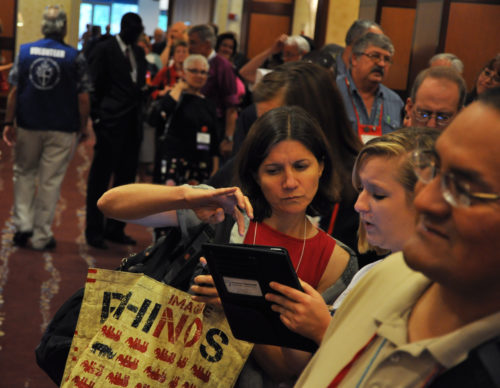 The line of people wanting to testify snaked down the hallway of the Indianapolis Marriott Downtown. PBB&F extended the hearing for a half hour in order to hear from more people. Here, Rebecca Wilson, center, and Rebecca Duggan, an Episcopal Service Corps member, go over her testimony as they wait. ENS photo/Mary Frances Schjonberg

Bailly called North Dakota a “state of contrasts” with unemployment close to two percent in the portions of the state in the midst of a boom in oil production and between 70 to 80 percent on the state’s Indian reservations.

“The poverty there is abject; it is unbelievable,” he said. “The problems with our youth are amazing — teen suicides are at record high levels”

“We reaching out to hundreds and hundreds of youth, and we’re helping them to look forward to a future,” Bailly added. “These are programs that are high impact.

The three counties with the nation’s highest poverty rate, and four of the top 10, are in western South Dakota, according to U.S. Census Bureau statistics reported here. Ziebach County in the Cheyenne Reservation is first at 50.1 percent. Todd County in the Rosebud Reservation and Shannon County in the Pine Ridge Reservation are ranked second and third.

The Rev. Steven Pankey, Diocese of the Central Gulf Coast deputy, asked PB&F to allot the “measly $50,000” needed to update the church center’s e-mail system, which currently runs on a Windows 2003 platform.

Before the testimony began, Diocese of Maine Bishop Steve Lane, who is PB&F’s vice chair, told the crowd that “PB&F has been listening hard not only at this convention, but long before this convention and we think we are well aware of the resolutions making their way through the two houses.”

“In building the budget, we are very mindful of the needs and concerns of the church and we are considering things in the budget even before the resolutions are passed,” he said, adding that the committee believes that “a number of resolutions will still be in the pipeline” when the committee has to present a budget to convention.

“This is the nature of our system – this kind of parallel development between resolutions and the budget-building process,” he said. “This is the way it always is, but we’re two days shorter this time around so we are endeavoring to do our best to hear you to include as much as we can. We just want to say that we recognize that the legislative process in the houses will not be complete before we must submit a budget.”

The committee is scheduled to present its proposed budget at 2:15 p.m. July 10 to a joint session of the House of Bishops and the House of Deputies in the deputies’ hall. Lane has said that because the budget document must be to the printer by 3:00 p.m. local time July 9 at the latest, the committee will have its 2013-2015 proposed budget finished by noon that day.