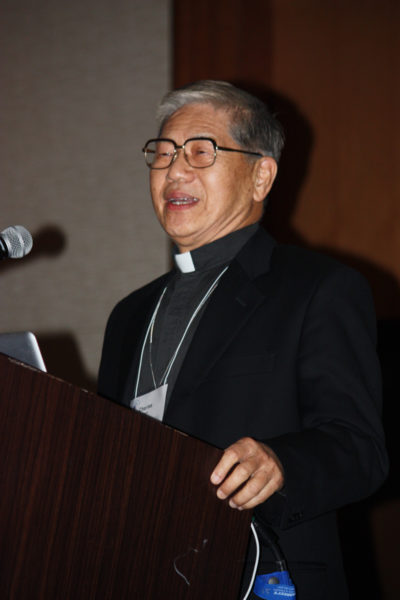 The Rev. Charles Chen of the Diocese of Taiwan accepts a stewardship award honoring his parish’s commitment to building churches. Photo/Janet Kawamoto

[Episcopal News Service – Indianapolis] Good stewardship can be a transforming experience, and the Episcopal Network for Stewardship celebrated four success stories with its Apostles in Transformational Stewardship awards during a July 6 reception at General Convention, meeting here.

The award winners were nominated by their dioceses at the request of TENS. Short video presentations described the programs and their effects.

Following the awards presentation, the gathering heard a keynote address from the Rev. Canon Edwin Bacon, rector of All Saints Episcopal Church, Pasadena, in the Diocese of Los Angeles.

First honored was the Rev. Charles C.T. Chen of St. James’ Episcopal Church and Kindergarten in Taichung, Taiwan, which has funded the construction of 12 other churches, although it is not a particularly wealthy congregation.

“I pray that our example may be challenging and inspiring to others in Taiwan and throughout the world to serve others,” Chen told the gathering when accepting the award. “The world is full of selfishness and greed and the world is also full of corruption and indifference and, in the personal, broken relationships. Everyone wants to serve themselves, not others. We can show the world the joy that comes from serving others and serving Christ. ”

Elizabeth McKay Moosbrugger of St. Paul’s, Cleveland Heights, Ohio, led the Diocese of Ohio’s “Bricks for Haiti” project, a response to the January 2012 earthquake that leveled much of the nation’s infrastructure, including the Episcopal Cathedral of the Holy Trinity, which had been a center of community life in Port-au-Prince. Moosbrugger inspired congregations in her diocese to find creative ways to raise money to contribute to the Episcopal Church’s relief efforts in Haiti.

“I’ve been astounded by the power of that word, ‘yes,'” said Moosbrugger of the unexpectedly successful campaign, which raised more than 115% of its financial goal. “My ‘yes’ was followed by 68 parishes saying ‘yes.'” The efforts in Ohio, she said, also inspired other dioceses to assist Haiti, which is the largest diocese in the Episcopal Church.

“I am honored to accept this award on behalf of all those who say yes to transforming the world through stewardship,” she concluded.

Field Griffen of the Diocese of Oklahoma’s stewardship commission accepted the TENS award on behalf of the diocese. The commission created an annual giving campaign titled “Gratitude, Prayer and Faith,” which was intended “to bring about life-changing attitudes toward gratitude, giving and discipleship,” according to a program description. “While often our culture stresses the contractual nature of giving, [the program] addresses the joyful nature of covenantal giving,” the description said. Some congregations achieved a 30% increase in giving and many first-time pledgers.

“Retelling people what they already know about stewardship is not enough,” Field said as he accepted the award, adding that what is necessary for success is to build a program that can transform lives.

Clergy, lay leaders and diocesan leaders in the Diocese of New Hampshire built a stewardship program based on a rule of life and spiritual depth, “founded on prayer, non-profit management excellence and theological principles of stewardship,” according to a program description. Program leaders produced video messages, preaching notes and a campaign manual, as well as an annual stewardship institute. The result was a diocesan-wide increase in giving of 10% in a time of economic downturn.

“This award tells the clergy, lay leaders and congregational donors of New Hampshire that courage, prayer and hard work do pay off,” said the Rev. Charles LaFond, canon for congregational life for the diocese.

The people who built the program adopted a can-do attitude, he said. “When the recession hit, we prayed for mountains to be moved – and we brought our shovels.”

In his keynote address, Bacon described the importance of generosity, which he said was the heart of stewardship. “One of my favorite geographical features on the planet is the headwaters at the top of the Jordan River — so tiny and insignificant, but it flows into this great river, then into the Sea of Galilee,” he said.

The Sea is full of life, he continued — families and fishermen and boaters and jet skiers. Then the Jordan flows out of the Sea of Galilee into the Dead Sea — which is dead because nothing flows out of it, Bacon said.

“We want you to be a Sea of Galilee, not a Dead Sea,” he told the assembly. “Absolutely everything we have is a gift from God. It is a great pleasure to give and give.”

— Janet Kawamoto is an associate editor for Episcopal News Service.