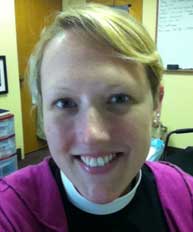 [Episcopal News Service] I am not a Roman Catholic. I am a cradle Episcopalian. In fact I am an Episcopal priest, who studied theology and ethics at Yale Divinity School, which is how I know Sister Margaret Farley.

Until three weeks ago, most people in secular and even religious circles had not heard of Farley, author of “Just Love: A Framework for Christian Sexual Ethics.” Unfortunately, those unfamiliar with Farley’s work will now have a first impression of her that may be colored by the Vatican’s denouncement that said her book “affirms positions that are in direct contradiction with Catholic teaching in the field of sexual morality” and therefore could cause confusion and “grave harm to the faithful.”

Farley has stated herself that she never intended for the book to be “an expression of current official Catholic teaching.” I believe it is in fact often the case that the church’s (Catholic, Protestant or otherwise) “official teaching” on human sexuality has caused grave harm to the faithful. I would argue that Farley’s contributions to the field of Christian sexual ethics have done more to strengthen and ground the spiritual and sexual lives of Christian believers in justice and love than most “official church teaching.”

In her lectures, in her written words, and in very self, Farley embodies justice, compassion, faithful questioning, and love that has put a recognizable face on God for many. I watched her give my female Catholic friends back their faith tradition and I watched them tearfully accept the gift they were not sure they would be able to receive. Her teaching and her care spoke to who I was as a person, a female, bisexual, Christian person, struggling to discern for myself if I could continue to find a home in my own Episcopal/Anglican tradition (still in the midst of our own struggles over gender, race and sexual orientation).

Farley helped me to see that our Christian tradition is grounded in goodness and justice and she helped me to find a place I could stand on the inside. She showed me that I could be faithful, ask questions, and push boundaries and that there was a place for me at the table. Her scholarship is beyond reproach, but it is her pastor’s heart that spoke to my heart so I could hear, “You are beloved.”

“Just Love” is the culmination of years of work that led Farley to create a framework for how to be in relationships, specifically sexual relationships that are based on “justice in loving and in the actions that flow from that love.” For years the church has been experiencing a widening divide between who we say we are and how we act. We say we are accepting, loving, compassionate followers of a God who came to bring healing and freedom. Then we exclude, reject, harm and oppress. People are not stupid. They see the incongruities. And they have been wounded. The church has wounded so many people. Yet the church keeps wounding, going after its most faithful members because they cannot see beyond their own clutches at power.

I grieve any personal pain that Farley has experienced over this ordeal. But as a clergy friend of mine posted to Facebook the other day, “If Vatican censure of Margaret Farley means that more people will read a book as wise, loving, and powerful as JUST LOVE, then I think the Holy Spirit is at work. More people might just come to realize that there is such a thing as a relevant, reverent Christian sexual ethic.”

I personally am glad that out of this misguided move by men in power who have yet to see the light, more people will come to know Margaret Farley and the powerful witness for justice and love that she is.

— The Rev. Canon Sara Shisler is canon for spiritual formation at the Episcopal Cathedral of the Incarnation in Baltimore, Maryland. She received a Master of Divinity in 2008 and a Master of Sacred Theology with a concentration in Ethics in 2009, both from Yale Divinity School.