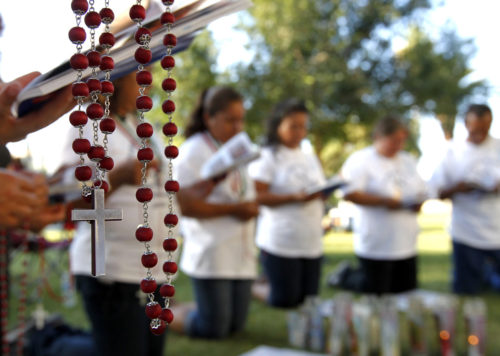 Members of Promise Arizona hold a prayer vigil prior to the United States Supreme Court decision regarding Arizona’s controversial immigration law, SB1070, coming down at the Arizona Capitol June 25 in Phoenix. The Supreme Court struck down key provisions of Arizona’s crackdown on immigrants Monday but said a much-debated portion on checking suspects’ status could go forward. AP Photo/Ross D. Franklin

“As one working and praying for a more just immigration policy, I was guardedly pleased with the Supreme Court ruling on the controversial SB 1070 law,” said Smith, a vocal opponent of the measure, in a statement released to the press.

The 5-3 high court decision blocked three of four contested areas of the law, but let stand the most controversial “show me your papers” provision, which authorizes state police to check the immigration status of anyone they detain if there is reasonable suspicion that the person is unlawfully in the United States.

Yet the ruling also said that the federal government has the ultimate authority to decide who will be held on immigration charges and deported.

The majority opinion written by Justice Anthony Kennedy blocked parts of the law that would have made it a misdemeanor for immigrants to fail to carry identification that says whether they are in the United States legally. It also said the state cannot make it a crime for undocumented persons to apply for a job and cannot arrest someone based solely on the suspicion that the person is in this country illegally.

Justices Antonin Scalia, Clarence Thomas and Samuel Alito held dissenting opinions. Justice Elena Kagan had recused herself, saying she had worked on the case while serving in the Justice Department prior to her nomination to the court.

Smith called the high court’s ruling a step in the right direction but said he wished justices had gone further, adding that the ruling still leaves “much work to be done to ensure that law-abiding immigrants in our country are treated in a just and humane manner.

“For example, the ‘show me your papers’ provision of the law, which the court left standing, still has enormous potential for racial profiling and other abuses,” he said. “There is still much work that has to be done to assure that all our immigration laws respect the dignity of every human being.”

“The Episcopal Church is committed to public policies that create a more just and humane immigration system in the United States,” Alexander D. Baumgarten, the Episcopal Church’s director of government relations, wrote in an email to ENS. “Over the past two years, the church has expressed consistent concern over Arizona’s law because it makes life more challenging, and our communities less welcoming, for those who come to this nation seeking to build a better life for themselves and their descendants.  The enforcement of existing immigration laws, while an obligation of elected leaders, should be conducted in a way that safeguards the civil rights of all people and respects the dignity of all God’s children.

“We respect the Supreme Court’s role as the arbiter of constitutional questions in the United States, and are grateful that several of the farthest-reaching aspects of the Arizona law are now no longer in force,” Baumgarten continued. “We remain concerned about the impact of the “show your papers” provisions upheld by the Court, and we urge lawmakers in Arizona, and throughout the country, to act now to rethink this unfortunate policy and others like it.  Ultimately, the debate over this law reinforces the need for Congress and the Administration to undertake the work of comprehensive immigration reform.”

The Arizona legislature approved SB 1070 in 2010; a federal judge issued a preliminary injunction blocking the law July 28, 2010, the day before it was to take effect. The lower court decision was upheld by the ninth circuit appellate court and state officials appealed the ruling to the Supreme Court,

The U.S. Justice Department had argued that federal immigration policies supersede any state laws, and that the law encourages racial profiling by allowing officers to request proof of citizenship if they suspect someone is in the country illegally.

The ruling’s potentially could impact laws in about 20 states, from Pennsylvania to Utah, which have either passed or are in the process of enacting similar legislation aimed to target and deport undocumented persons. Elsewhere, officials were reviewing the law to determine its impact on such legislation.

The decision comes after an April 23 Pew Research Center study revealed that for the first time in decades more undocumented people are leaving, rather than entering, the country.

Smith said he was unaware of any immediate demonstrations planned by local church leaders, but added, “I would expect that no one sees the struggle for human rights in Arizona to be over. No matter what your opinions are in this matter, I would ask that you keep in your prayers those of your fellow Arizona Episcopalians whose lives are affected on a daily basis by the struggle to find a just solution to this problem.”