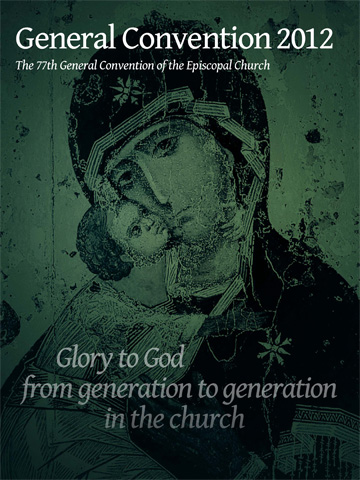 The icon of Our Lady of Vladimir, shown here on a convention worship program, also will be incorporated into a reredos behind the altar at General Convention.

[Episcopal News Service] Worship at General Convention will demonstrate diverse liturgy and music from across the Episcopal Church.

“It’s a combination of everything that the Episcopal Church has at its disposal that’s been approved,” said the Rev. Charles Dupree, rector of Trinity Episcopal Church, Bloomington, Indiana, co-chair of the convention worship planning committee.

Eucharist will be celebrated each day, with different services using formats from Enriching Our Worship or from the Book of Common Prayer‘s Rite 1 or Rite 2. Music will come from the 1982 Hymnal; Lift Every Voice and Sing II; Wonder, Love and Praise; Voices Found; El Himnario; and Flor Y Canto, a Spanish music resource.

Musicians will range from church organists to a Native American flute player to a Haitian choir. Programs will be printed in English and one other language — Spanish most days, Hmong on July 6 and probably Shoshone on July 9, Dupree said.

Service participants will be diverse, too.

“We’re aiming for diversity of all sorts,” said the Rev. Sandy Webb, convention liturgical consultant and associate to the rector at St. John’s Episcopal Church, Roanoke, Virginia. This includes “diversity of orders of ministry, so that we have lay people, bishops, priests and deacons represented at all services.

“We want geographic diversity from all corners of our church,” Webb said. The committee also aims for diversity in age, ethnicity and physical ability.

“We’re really trying to encompass the full picture that is the Episcopal Church,” he said.

The liturgies themselves will be “straightforward Eucharist,” Dupree said. “The goal for the design of these liturgies is for it to be a stabilizing force within the business of the convention.”

“Liturgy, while it’s supposed to be engaging and interesting and stimulating, it also is familiar and grounding,” he said. “So my hope is that it will be a place where people can come and find their center … and at the same time be reminded about how the Spirit has [moved] and is moving through the work of the church.”

The daily Eucharist will be held in the ballroom of the J.W. Marriott hotel, connected to the convention center via skyway, instead of in a center exhibit hall. According to the General Convention website, this saves the cost of renting a hall used only for services and rehearsals and was necessary because of the reduced convention budget adopted in 2009.

Seating will be “theater style,” with a center platform for the altar, Dupree said. “And then we designed a reredos that picks up on some ancient iconography with some modern elements to it.” The icon of Our Lady of Vladimir – also used on the program covers – will be “the focus, so that it can hopefully infuse the room with a sense of mystery.”

Each service except the July 8 festival Eucharist and UTO ingathering will commemorate saints from Holy Women, Holy Men, a revision of Lesser Feasts and Fasts now in trial use.

Commemorated will be Walter Rauschenbusch, Washington Gladden and Jacob Riis on July 5; John Hus on July 6; Harriet Beecher Stowe on July 7; Samson Occum on July 9; Bartolome de las Casas on July 10; Benedict of Nursia on July 11; and Soderblom on July 12.

July 9 is “also a day that we were asked by the Standing Commission on Small Churches to try to create a liturgy that would speak to designing and implementing liturgies in our smaller congregations,” Dupree said. “Many of our churches are incredibly small and don’t have the resources of some of the larger congregations in terms of access to different instrumentation and different sorts of choirs.”

The conundrum was that a General Convention Eucharist is anything but small.

“How do you create a small-church experience with 2,000 people? We assembled a group of parish priests and musicians from the Diocese of Indianapolis who serve in small congregations, and we set about trying to do just that,” Dupree said.

The day’s musical instruments will include hammered dulcimer, psaltery and guitar, he said. “The idea around that is that you can take the talents that you have, and in the appropriate contexts they can be very effective and moving.”

In keeping with the day’s commemoration of Occum, a Native-American flute player also will participate. “That, too, is a very beautiful instrument,” Dupree said. “It doesn’t have to be complex. We can use really simple instruments and, done with some thought and care, they can be very, very effective.”

July 9 also will feature a volunteer choir of bishops and their spouses.

“One of the things I always tried to encourage small churches to do would be to locate and develop local resources,” said Marilyn Keiser, Trinity music director and committee co-chair. “So I figured local resources at General Convention, among many other things, would also be the bishops who loved to sing and their spouses.”

The Sunday Eucharist will use “Missa Guadalupe,” a Mass setting by Joel Martinson that alternates between Latin and Spanish, Keiser said.

Musicians for that service will include a brass quintet, a combined choir of singers from the Diocese of Indianapolis and a choir from Haiti, she said.

Throughout the convention, various choirs, organists and other instrumentalists will perform and lead music in styles ranging from traditional hymns to spirituals to Taizé songs. Alleluia verses will come from Flor Y Canto. Various musicians, including Dupree, have written settings for the daily sung psalms. July 11 will feature a Rite 1 service, with the Christ Church Cathedral choir of girls and men from Indianapolis “doing a lot of very traditional plainsong things for the prelude,” Keiser said.

“We’ve tried to have a really good variety, a good representation of the ethnicities within the Episcopal Church,” said Keiser, who will play organ at the opening Eucharist and on July 9.

“I think there’ll be a good balance of the traditional music of the church, the newer things … and then lots of instruments,” she said. “We hope that we’ll be inspiring. There’s nothing like singing in a group like that – the thrill of singing with several thousand people is just amazing.”

While the committee worked to match music and liturgy each day – using Native-American drums for “gathering music” and a Native-American flute player during the service commemorating Occum, for example – individual services aren’t geared just to particular “constituencies,” Webb said. “We use a concept, and have for the last several General Conventions, that we’ve deemed ‘blended liturgy.'”

A presider might do part of the eucharistic prayer in French while a lector reads a lesson in a Native American language, he said. “Over the course of the liturgy, we’ll move seamlessly between three or four languages.”

The goal, he said, is “to show that the body of Christ is not separated parts, but a consistent whole, all parts being diverse.”

Meanwhile, he’s busy with the practical logistics of planning services involving thousands of people. During worship, he wears a radio power pack to keep connected to worship leaders. He meets daily at convention with a worship team to keep things running smoothly. Currently, he’s working on contracts with a local bakery and winery for the quarter-ton of bread and 16 cases of wine needed.

“Hopefully it will all be things from Indiana soil that we’ll be consuming,” he said.