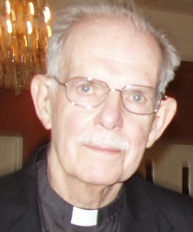 [Episcopal News Service] The Rev. Canon Leonel Mitchell, whose words echo at every Baptism held in an Episcopal church, died May 23 after a short illness.

Mitchell, 81, drafted the Thanksgiving over the Water prayer for the 1979 Book of Common Prayer, restoring what one commentator called “allusions” to “the primary biblical archetypes” that previous version of the prayer book had eliminated.

Mitchell was influential in many ways over the 1979 version of the prayer book, and its introduction to the church. His “Liturgical Change: How Much Do We Need?” was “highly recommended” as a “concise study course for parish use” when the Draft Proposed Book of Common Prayer was released in February 1976 for study in parishes. The draft prayer book was subsequently approved by the General Convention in 1976 and received final approval three years later.

Mitchell’s liturgical influence extended after the prayer book revision years, as seminarians, theologians and others read and studied his many books, essays and other writings, especially his 1985 book “Praying Shapes Believing: A Theological Commentary on the Book of Common Prayer.”

Praying shapes believing, he wrote, because “worship, religious activity in all of its aspects – what we do and how we do it, as well as what we say and how we say it – underlies religious belief.”

The introduction of the 1979 prayer book was not without controversy (an early example is here), yet Mitchell argued in his book that “we change and the world changes, and we approach God with new problems and new questions.”

“The language of theology must be able to hear and respond to these new experiences without changing its age-old witness to the Eternal and Unchanging God,” he wrote.

Mitchell said the theology of the 1979 Book of Common Prayer “faithful to the tradition” and was “a theology we can believe and teach to people today.”

Perhaps echoing Mitchell’s belief that we and the world change, his family, friends and others influenced by his life posted comments on his Facebook page as word of his death spread.

“I learned so much from Lee, both inside and outside his classroom,” the Rev. Frank W. Hughes, vicar of Trinity Episcopal Church in Columbus, Georgia, wrote. “He was a fine scholar, a patient teacher, and a wise counselor, as well as a friend.”

After his daughter, Anne Gair-Macmichael, wrote a farewell message to her father, Catharine Phillips responded with sympathy, saying “your Dad was a huge part of my priestly formation.”

He became a deacon and priest in 1954, and served parishes in New York before teaching at both the University of Notre Dame and the Episcopal Church-affiliated Seabury-Western Theological Seminary. He was the canon theologian at the Cathedral of St. James in South Bend, Indiana at the time of his death.

Mitchell is survived by his wife, Beverly, and their children, David and Anne, and their families.

Funeral arrangements are pending, according to the Very Rev. Brian G. Grantz, dean of the South Bend cathedral.