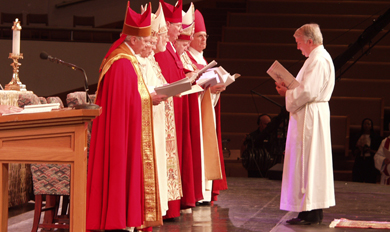 More than 3,500 people participated March 24 in the consecration of Gregory O. Brewer, right, as the fourth bishop of the Episcopal Diocese of Central Florida. Photo/Joe Thoma

[Episcopal News Service] More than 3,500 people attended First Baptist Church of Orlando on March 24 to participate in the consecration of Gregory O. Brewer as the fourth bishop of the Episcopal Diocese of Central Florida, while many watched the event on live streaming video.

The Very Rev. Justyn Terry, dean and president of Trinity School for Ministry in Ambridge, Pennsylvania, was the preacher.

He described Brewer, 60, as “a man of prayer, vision, pastoral heart, strategic mind. He is a man of the Gospel, with a love for the lost and a love for the church. He is a preacher and a teacher of the word of God. But most of all he knows and loves Jesus Christ and moves in the power of His spirit.”

A prayer rug, designed by Bishop Azad Marshall of Iran and woven by Christians in Pakistan, was used as the site for the prayer of consecration.

Choirs from parishes throughout the diocese joined forces to provide choral music for the service, including two pieces written for the consecration: Ubi Caritas, a motet by Peter Mathews; and Let the People Praise You, an anthem by B. Lane and M. Miller. The massed choir also performed Hubert Parry’s I Was Glad during the opening procession. A psalm and composition for organ, brass, timpani and unison sopranos also were commissioned especially for the service. All composers are members of the diocese.

He was assistant professor of pastoral theology at Trinity School For Ministry in Ambridge from 1992-1996. For 16 years before that he had served parishes in Winter Park, Florida, including Episcopal Church of the New Covenant, a diocesan church plant.

Following his consecration, Brewer said that it is his “deep desire that in the midst of genuinely sacrificial mission we never forget eating and drinking and laughter and joy and knowing all that we share as we literally gather together … as a foretaste of the heavenly banquet of Christ … May we be known as a diocese that eats and celebrates and laughs together often and heartily.”

Choosing First Baptist Church rather than the Cathedral Church of St. Luke as the site of the consecration wasn’t just about space.

“To be here is not merely a matter of convenience because of the size of the church,” Brewer said after the consecration. “I really hope that this is a very clear, public signal that we, along with the rest of the leadership in the Diocese of Central Florida, regardless of our denominational position, can stand together for the sake of the Gospel of Jesus Christ.”

Brewer succeeds the Rt. Rev. John W. Howe, who is retiring after serving the Central Florida diocese as its bishop since 1990.

Brewer is married to the former Laura Lee Williams of Orlando; they have five children.

The Diocese of Central Florida has 31,000 baptized members at 88 parishes and missions in 15 counties.