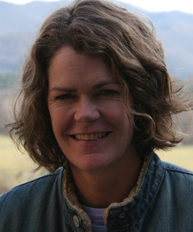 [Episcopal News Service] Although global warming has become politicized in Congress, there is one public arena with more agreement than discord on the need to address climate change: that’s among our religious leadership in the Episcopal Church.

Presiding Bishop Katharine Jefferts Shori, has testified before the Senate environment committee on the connection between global poverty and climate change. The Genesis Covenant challenges all church facilities in the Episcopal Church to reduce their greenhouse gas emissions by 50 percent within 10 years.

While many lay and ordained leaders acknowledge the scientific consensus that human actions have caused the planet’s warming, it’s harder to translate that knowledge into action at a congregational level.

As a lifelong Episcopalian, I traveled across the country with my two children to document how churches were integrating the environment into their ministries: the result was a book called Natural Saints. My research revealed a need for stories about how congregations were confronting climate change, the greatest moral crisis of our time.

To that end, Sacred Acts: How Churches are Working to Protect Earth’s Climate includes the writings of national leaders such as Bill McKibben, the Rev. Sally Bingham, founder and director of Interfaith Power & Light, and Katharine Hayhoe, climate scientist and evangelical.

But the focus of this anthology is on voices from local congregations that are harvesting food from church gardens, weatherizing parish halls, installing solar panels on sanctuaries, and advocating against mountaintop removal. Georgia Interfaith Power & Light, for example, has completed 76 energy audits of religious facilities, saving congregations 20 percent of their energy budgets: 200 more congregations are in the pipeline. 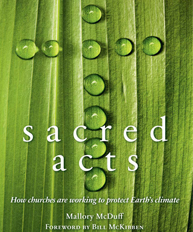 While the book is ecumenical in scope, many of the contributors have ties to the Episcopal Church. Ragan Sutterfield writes about faith and food at places like Christ Church in Little Rock, Arkansas, where the kitchen becomes a biweekly pick-up point for an online farmers market, which reduces carbon emissions and promotes local economies.

Sacred Acts is organized around four avenues for addressing climate change – stewardship, spirituality, advocacy, and justice – with three chapters in each section.

Writing about stewardship, the Rev. Fletcher Harper, an Episcopal priest and executive director of GreenFaith, describes his work with congregations on projects such as installing solar panels at the United Methodist Church in Red Bank, New Jersey, which now generate 30 percent of the congregation’s energy or conducting an energy audit at Shiloh Baptist Church in Trenton, New Jersey, with $7,000 in annual savings.

The Rev. Brian Cole, at Church of the Good Shepherd in Lexington, Kentucky, tackles spirituality and climate change, addressing the challenge of preaching when the climate is warming. Through advocacy, Michele McGeoy, the executive director of Solar Richmond, has partnered with congregations in California in a green-jobs training program that prepares youth to work in the solar industry. Parishes such as St. John’s Episcopal Church in Oakland, California, hired a graduate of Solar Richmond’s program to help install solar panels on its church, thus lowering its carbon footprint, and promoting economic justice.

Jill Rios, worshipped at La Capilla de Santa Maria in Hendersonville, North Carolina, for five years with her husband the Rev. Austin Rios. In her role with North Carolina Interfaith Power & Light, Jill focused on climate justice, working with parishioners on sustainable building projects at the church, which ministers to Spanish-speaking immigrants from Latin America. She examines the connections between faith and justice, given the growing number of climate refugees forced to leave their homes due to climate change.

Some skeptics might protest that churches are unprepared to confront global warming when memberships and budgets are shrinking. Others might say people of faith lack the capacity to act with consensus around a politically divisive issue.

But history tells me that Christians have mobilized around moral and political issues such as the anti-slavery and civil rights movement. And as editor of this book, I realized how climate change has brought together diverse religious denominations, from evangelicals to Episcopalians, who often disagree about issues such as abortion or same-sex marriage.

The voices in Sacred Acts reveal that we must reinvigorate churches through climate action that reflects loving our neighbor as ourselves. Our liturgy prepares us for sacred acts of resistance that can reconcile us with the earth, each other, and ultimately with God. And that’s the kind of Episcopal Church I want for my children.

— Mallory McDuff teaches at Warren Wilson College and is the author of two books about faith and the environment: “Natural Saints” and “Sacred Acts.” She worships at The Cathedral of All Souls in Asheville, North Carolina.