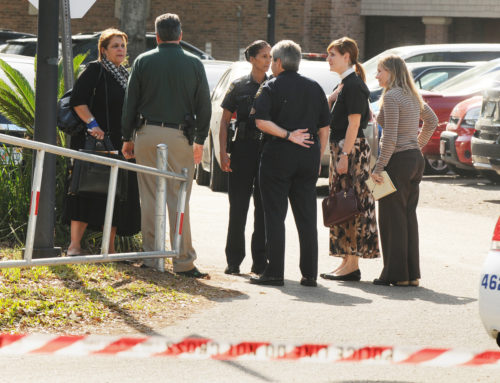 St. John’s Episcopal Cathedral Dean Kate Moorehead, second from right, listens as State Attorney Angela Corey, left, speaks with investigators and faculty near the back entrance of Episcopal High School March 6 in Jacksonville, Fla. after a shooting at the school. (AP Photo/The Florida Times-Union, Bob Self)

[Episcopal News Service] A Spanish teacher who had been fired earlier in the day March 6 shot and killed Dale D. Regan, the head of Episcopal School in Jacksonville, Florida, on the school’s campus and then turned the gun on himself.

Police said Shane Schumerth, 28, came on campus with an AK-47 in a guitar case, went to the administrative office and shot Regan several times before killing himself, according to a report from News4 television station. Teacher Carolyn Cooper told News4 she heard five gunshots.

Regan had been at Episcopal for 34 years, teaching English before she became head of school, according to Moorehead. Regan was profiled by the Times-Union in May 2010 during the school’s expansion.

Schumerth was hired in August 2010. He graduated from Purdue University with a B.A. in Spanish and had taught Spanish to students of all ages, including an immersion program to eighth graders, the school said at the time.

“No children have been injured,” Jacksonville Sherriff’s Office spokeswoman Melissa Bujeda told media at the scene just after 2 p.m., about 30 minutes after the shooting. “This doesn’t appear to be involving any student at the school.”

However, some students knew something bad was happening.

“Another teacher came in and said, ‘Go to the small office on the side and hide,'” 11th-grader Maria Boyance told News4. “A lot of people were crying and freaking out, but the teachers stayed calm the whole time.”

Lilly Sheppard, 13 and in the eighth grade, told the Florida Times-Union newspaper that she was close to where the shooting happened, but didn’t hear gunshots. The head of the upper school ordered her to go back to where she was when she walked out of a classroom. She said she was then evacuated from the school about 20 minutes later.

Sheppard called the teacher “shy” and said “he didn’t really seem to fit in with the other teachers.”

That morning there were rumors he’d been fired, Sheppard said.

“No one seemed that surprised that he’d been fired,” she told the newspaper. 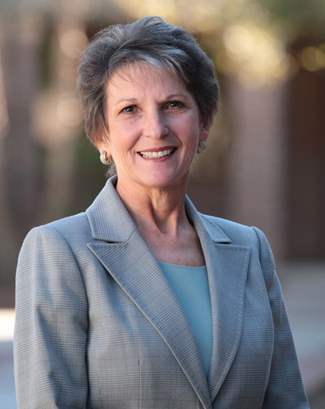 “We have full confidence that Dale Regan is already with God and in heaven with our Lord and savior Jesus, but we ask for your prayers as we mourn this great leader,” the Very Rev. Kate Moorehead, dean of St. John’s Episcopal Cathedral in Jacksonville, said during a later media briefing at the scene with Undersheriff Dwain Senterfitt.

Moorehead is vice chair of the school’s board, and Senterfitt’s daughter graduated from Episcopal. “I knew Ms. Regan pretty well, too,” Senterfitt told reporters.

Moorehead said, “We have to reassure the students that Dale believed in God and that she, in fact, is in a good place but that it’s okay to be angry and to be upset. I think all of us will go through a lot of emotions in the coming months and even years as we remember this incident.”

The school said in part on its website that “the entire school family mourns the loss of our friend and leader.”

The school will be closed until March 19, according to the statement. Students were scheduled to be on spring break next week.

“We are deeply shocked and saddened to hear of the tragic death of Dale Regan,” the Rev. Daniel R. Heischman, executive director of the National Association of Episcopal Schools, said in a statement. “Our hearts and prayers go out to all members of that community, her family, and her friends. Dale Regan was a great leader of an Episcopal school, deeply devoted to the school that she loved and served for so long, and we have all lost a visionary educator and compassionate human being.”

At least three churches, including the cathedral, San Jose Episcopal Parish and St. Mark’s Episcopal Church in Jacksonville announced that they would hold prayer services this evening. A memorial service is reportedly planned at the school for March 10.

Jacksonville-based Diocese of Florida Bishop Samuel Johnson Howard and other Episcopal clergy gathered at the school to provide pastoral care if they were needed, the Rev. Kurt Dunkle, rector at Grace Episcopal Church in Orange Park, told the Times-Union.

“One of the great gifts of being part of a larger church, which we call a diocese, is that when you need your colleagues, they show up,” Dunkle told reporters.

Dunkle was in a meeting with Howard when they heard about shootings. The first thing Dunkle did was call to check on the well-being of his daughter, who is a senior at the school.

Bujeda said in her short statement to the media that law-enforcement officials received a call at 1:23 p.m. EST reporting that a man was on campus with a firearm, followed by a subsequent call saying that “they had heard shot fired.” When police arrived they found two people dead, she said.

Emails were sent just after 2 p.m. to parents of Episcopal High School students telling them to “respond to the normal pick up location” because “the situation is under control. At this time there are no outstanding suspects,” according to a Times-Union news story.

Traffic was apparently backed up for blocks along Atlantic Boulevard leading to the school that describes itself as providing “a superior college-preparatory education for students in grades six through twelve within a nurturing Christian atmosphere.”

The school has an enrollment of 900 students with 300 in the middle school and 600 in the upper school. Episcopal’s main campus, the Munnerlyn Campus, is situated on 56 acres along the south bank of the St. Johns River in central Jacksonville, according to information on its website. The student-to-teacher ratio is 10 to 1; the average class size is 17. Episcopal employs 90 faculty, all of whom have 4-year degrees or higher; 65 percent have graduate degrees and 3 percent have earned a doctorate. The average teaching tenure for faculty members is 19.75 years.

Lauren Baxter, a parent of an Episcopal High School student, told the media that “private school, public school, these things happen. Who knows what the circumstance were,” and added that “this is a very safe school and very wonderful school, and if something happened here, it can happen anywhere.”