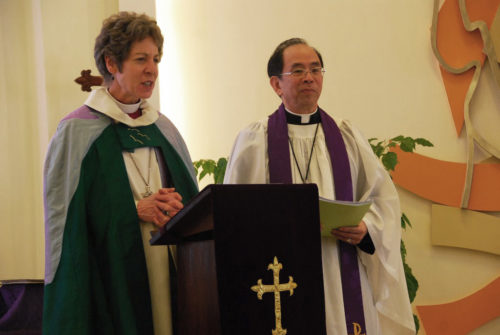 The Rev. David Chee interprets as Presiding Bishop Katharine Jefferts Schori delivers a sermon to a meeting of the Diocesan Synod of the Diocese of Taiwan. Photo/Richard Schori

[Episcopal News Service] Drawing on her experiences during a tour of Episcopal and Anglican dioceses in Asia, Presiding Bishop Katharine Jefferts Schori preached at the opening service for the Annual Synod of the Episcopal Diocese of Taiwan on March 2.

Noting the challenges facing people in many nations — poverty, homelessness, addiction, isolation, slavery, war and political upheaval — Jefferts Schori asked, “Where is the light? Where is hope for a different future?

“Jesus’ response is to challenge us to embrace that suffering and hopelessness and let it be transformed by love,” she continued. “When he says, ‘those who lose their life will find it,’ he means turning toward that suffering rather than away from it. When we do, we will discover joy and life, rather than loneliness and hopelessness. There may still be captivity around us, but we have been set free to work toward a different reality.”

Losing your life, she said, means working with tsunami survivors in Japan, assisting farmers in the northern Philippines, advocating for peace and reunification in the Korean peninsula, helping gambling addicts in Macau, breaking the cycle of drug and alcohol addiction in U.S. rural areas, offering healing and help to rape victims in Africa, aiding migrant workers everywhere, and seeing that children all over the world are educated so they can build a promising future.

“Losing your life in order to find it is primarily about turning yourself inside out, giving yourself away to love the world into a new future,” Jefferts Schori said. “That’s what it means to be the light of the world — to let the light planted within us shine out, and dispel the dark.”

The full text of the sermon follows. 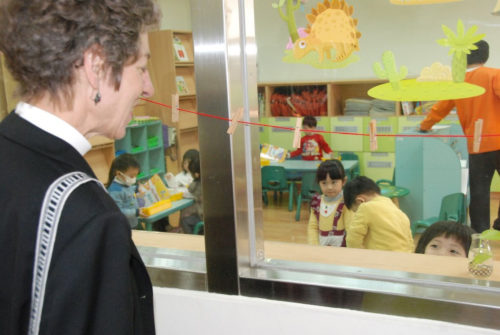 Taiwan, one of the 110 dioceses of the Episcopal Church, is the last stop on Jefferts Schori’s three-week visit to Anglican Communion churches in Asia, including the Philippines, Japan, South Korea, China and Hong Kong. She was accompanied in Taiwan by Peter Ng, the Episcopal Church’s global partnership officer for Asia and the Pacific, and Richard Schori, the presiding bishop’s husband.

During her time in Taiwan, the presiding bishop and her team also visited St. James’ Episcopal Church in Taichung, Taiwan, on Feb. 29, accompanied by Bishop David Lai. St. James’, which was founded 41 years ago at the request of U.S. servicemen, operates a popular kindergarten that serves 330 students ages 2 to 6. The kindergarten has a sister kindergarten in Boston, and the two schools occasionally exchange teachers. St. James’ also has a community service program and sponsors classes for all ages, including lessons in English and other languages. Its congregation, under the leadership of the Rev. Charles Chen, has funded 12 churches in the Philippines.

Also on Feb. 29, the presiding bishop’s party toured Tung Hai University in Taichung, an ecumenical university of which the Episcopal Church of Taiwan is a founding member. Guided by a campus official, they visited the “Luce Chapel,” named after the Rev. Henry W. Luce (1868-1941), an Episcopal missionary who arrived in China in 1897. His elder son, Henry R. Luce, was the founder of Time, Life, and Fortune magazines.

On March 1, the group visited St. Johns’ University near Taipei, founded by the Episcopal Church 45 years ago, and St. Stephen’s Church, Keelung, a small mission in a depressed town that ministers to children and distressed families.

Greetings from the rest of The Episcopal Church, who pray for you. When Isaiah challenges the people to be a light to the nations, he could be speaking to this part of the body of Christ. We are not only present in many nations, but we are meant to reach beyond those boundaries to all the other nations of the world, shining light in darkness, proclaiming love where there is hate and division, speaking in languages and ways that other nations can understand.

Isaiah wrote to a people in exile, to refugees and hostages held for ransom, in pledge for those who remained in their occupied homeland. In some sense we are all held captive, waiting and working in eager anticipation for the world God intended at creation – a world of peace and justice for all peoples. Isaiah wrote to a people who were feeling hopeless, challenging them to become a witness to the new thing God is always doing, to be a light to other nations also in captivity.

We, too, are still captive, along with those who surround us. The ills and suffering of the present age are not so different from Isaiah’s day, or Jesus’. People go to bed hungry, some sleep in subway stations or on the street. Others live in the prisons of addiction and grievous illness. Many live surrounded by the violence of war or the violence in their own homes and local communities. Some live in nations oppressed by overlords and tyrants. Countless numbers of children and adults are wage slaves, doomed to eke out a living hour by hour and day by day with little hope for anything more than dying young and exhausted. That reality is known in the poverty of the countryside as well as in wealthy city centers, where many people live lonely and disconnected lives even in the midst of crowds. Some are still sent off to prison for trivial crimes or reasons of conscience, or to labor camps where they disappear, forgotten. Where is the light, where is hope for a different future?

Jesus’ response is to challenge us to embrace that suffering and hopelessness and let it be transformed by love. When he says, “those who lose their life will find it,” he means turning toward that suffering rather than away from it. When we do, we will discover joy and life, rather than loneliness and hopelessness. There may still be captivity around us, but we have been set free to work toward a different reality.

Losing your life in order to find abundant life in Japan (Sendai and Tohoku) looks like working with tsunami survivors, teaching new job skills, sharing tea ceremonies with the displaced who are living lonely lives in temporary housing after their villages were destroyed.

Losing your life in Shanghai looks like building homes for senior citizens, offering community and shelter to abandoned and lonely elders of many different faith traditions.

Losing your life in the northern Philippines is building simple tramways for terrace farmers to haul implements, water, seeds, and crops up and down the steep and trackless hillsides.

It means advocating for peace and reunification on the Korean peninsula, sending rice to those who are starving in the North, continuing to seek ways to bring fearful governments to the negotiating table, as well as bringing Anglicans together from across the world to learn the ways of peace.

Losing your life means offering hope to gambling addicts in Macau, alcoholics in Honolulu, and drug addicts in rural communities in the United States. It means offering shelter, community, and hospitality to Filipino migrant workers in Hong Kong, Japan, Korea, and Saipan. It means advocating for just immigration policies everywhere, so that human beings might find decent and dignified ways to feed themselves and their families.

Losing your life in Congo means Anglicans welcoming rape victims into shelters, where they can find healing and support for rebuilding their lives. Those women have had their lives taken away from them by violence, violence repeated as they and the children born to them are shunned and discarded by their husbands, families, and churches. Would you lose your life for these human beings despised by their own society?

People of all ages discover new life in schools around the world, begun and supported by people who lose themselves in the work of teaching. Hong Kong is a province of some 30,000 to 40,000 yet serves several times as many school children. The Diocese of Haiti teaches 80,000 from preschool through university. Liberia is slowly rebuilding from civil war through the human capital developed in diocesan schools. Children in Taiwan are finding unexpected abundance in the kindergartens of this diocese. A man named Paul Rusch lost himself in love for the Japanese people beginning in the 1920s. He was expelled as the Second World War began, but he returned afterward to start a farming school, teaching desperately hungry people how to raise dairy cattle in the mountains. Today the milk and ice cream of that farm support an environmental program that teaches a new ethic for engaging the earth.

Losing your life in order to find it is primarily about turning yourself inside out, giving yourself away to love the world into a new future. That’s what it means to be the light of the world – to let the light planted within us shine out, and dispel the dark. As the psalmist says, “weeping may last for a night, but joy comes in the morning” (Psalm 30:5). When we embrace the weeping of the night, we begin to partake in that creative dawn, that shedding of light into the world, and we begin to be a light to the nations.

Will you take up your cross? Will you embrace the suffering around you, and let it touch your heart? Will you let love flow through you to heal that brokenness? Those who do will find their own lives renewed and redeemed in the process. That is the road to resurrection and new life. That is the direction in which the morning light dawns.

Embrace the suffering around you, and you will discover what Isaiah dreamed of: “Sing for joy, O heavens, and exult, O earth; break forth, O mountains, into singing! For the LORD has comforted his people, and will have compassion on his suffering ones.” May this season of Lent bring a new willingness to see the suffering around us and embrace them. That is the road to peace and light and life abundant. Peace and light be with you!