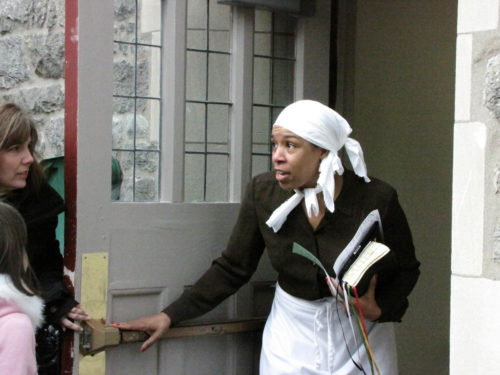 She was visiting the North Carolina drug store where her aunt worked when an African-American woman entered with a boy, two years at the oldest. He made a beeline for the seats at the soda fountain and began spinning around on them.

Because he was black, “my aunt had to say to the woman, ‘You know he can’t do that,’ and I was devastated,” Eberhardt recalled. Her aunt told her: “I don’t own the store, and it’s the owner’s policy, and there’s nothing I can do about it. I need to keep my job.”

“It has stayed with me all my life,” said Eberhardt, now a deacon in the Episcopal Diocese of Newark. 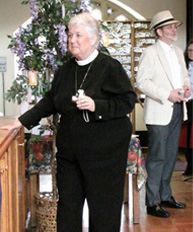 The Rev. Karen Eberhardt, deacon in the Episcopal Diocese of Newark and creator of the Underground Railroad re-enactment, watches as nearly 100 people playing the roles of escaped slaves take their last steps to freedom. Behind her, a plantation owner, played by Paul Hausman, seeks in vain to recover the fugitives. Photo/Sharon Sheridan

Such experiences, along with seminary studies of black history and racism, led her to create a 13-week curriculum on the Moses story and U.S. slavery that culminated in a re-enactment of the Underground Railroad in which human “conductors” guided escaped slaves from safe house to safe house en route to freedom in Canada. She hopes to publish a guide to the re-enactment activity, which has been tried at different venues in the diocese, for use in churches, schools and elsewhere.

On Sunday — commemorating the birthdays of Abraham Lincoln and the Rev. Absalom Jones, first person of color ordained an Episcopal priest — Eberhardt teamed up with the Rev. C. Melissa Hall to bring the Underground Railroad re-enactment to St. Peter’s Episcopal Church in Morristown, New Jersey.

Starting at the “plantation” – the church’s vesting room – more than 100 people of all ages divided into four teams portraying escaped slaves. Guided by conductors – including historic figures Harriet Tubman, Frederick Douglass and Sojourner Truth as well as Quaker farmers – the fugitives followed clues to creep from sanctuary to sanctuary. They navigated secret passageways and spiral staircases throughout the campus as they sought to elude the plantation owner and “patrollers,” who brought anyone they captured back to the plantation (to escape again, if they dared).

“Watchers” wearing pipe-cleaner stars escorted the groups from station to station, motioning them to crouch and hide whenever they spotted a baseball-capped patroller. Tubman and the other characters conveyed historical information during each 10-minute station stop. Eventually, most found their way through a hidden passage in a closet in Hall’s office to the parish house stage – standing in for Canada – where a sign above a cross proclaimed, “Thank God Almighty! It’s Freedom Land.”

“The kids know it’s not a real railroad. It’s a secret road,” she told the congregation, adding that the re-enactment was “not a game.

Those who guided the slaves to safety “were black people, and they were white people,” Hall preached. “And they were scared, but they did it anyway. And we will do it in their memory. The Holy Spirit calls us to love and trust and justice.”

After the service, congregants gathered at the “plantation” for a speech by its owner, who warned them about “Northern radicals” causing trouble and criticizing the South’s way of life.

“The Bible says, ‘Slaves, be obedient to your masters.’ Our Father Abraham had slaves. There’s nothing wrong with the way we are,” he said, reminding the “slaves” that they were property and would be recaptured if they escaped. Participants then received paper tickets dividing them into their teams.

The handful of teen and adult patrollers officially found few fugitives; those crouched down in hiding mostly were considered invisible. But the patrollers took their roles seriously enough that Hall had to redirect them several times (“why don’t you go look in my office?”) so the escaping groups could sneak safely to their next stations.

“It was very frustrating, ’cause you’d hear them and you weren’t allowed to see them,” said patroller Mary Woolley, 13, who snared five captives. In the context of the game, she didn’t feel guilty because she thought about the patrollers’ actions from their viewpoint, she said. Her perspective on the real thing? “It was probably really cruel.”

Gayle Shephardson slipped past the patrollers with her three daughters. “The scariest part was that sense that people are pursuing you … that we don’t have to live with in our ordinary lives,” she said.

Partway through the re-enactment, one teen patroller told Hall: “I feel bad. I want to help people escape.”

That’s just the sort of insight she hoped the re-enactment would generate, Hall said. She recalled another incident that occurred when she used the program several years ago while serving as chaplain at All Saints Episcopal Day School in Hoboken. A teacher came upon a group of second-graders portraying escaped slaves.

“Why?” a startled Hall asked.

“Because that’s what she’d do to us.”

An earnest discussion ensued, with the group ultimately voting to lock the teacher in the “barn” (the school’s kitchen).

She asked Eberhardt to help her introduce the program at St. Peter’s, she said, because she wanted “to create an experience where children and adults learn something important together.”

“That’s my ministry, is justice,” she said. “I think we’re under the misapprehension in this country that we’re done in terms of race relations, and we’re just starting. So an opportunity to visit who we were in the past and who we are now and who we can be in the future, I think, is critical. And what better way to do that with children and adults than through play, play at something very serious and critical? Then they can turn around to each other and talk about it and reflect on the experience of how God calls us to liberation in our actions and in our souls.”

One of St. Peter’s senior members, Valarie Gilliland, joined the dozens of children and parents hiding in the secret passageway hidden behind a bookcase in the rector’s office and tiptoeing through the parish hall toward freedom.

“I totally enjoyed it. I was like one of the kids,” she said. “For the children, this was an introduction to a very important part of American history, and it’s something that they’ll never forget.”

Reflecting on the actions of the real Underground Railroad’s conductors, Gilliland said, “They knew they could be persecuted themselves. It took tremendous courage, and I wonder in today’s world if any of us would have that courage.”