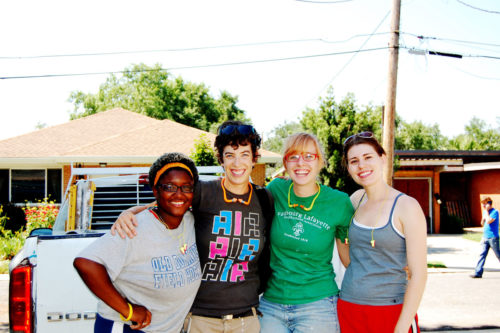 Members of the Episcopal Student Center at the University of Texas in Austin on a mission trip in New Orleans, Louisiana. Photo/Jewelz Jacobs

[Episcopal News Service] College can be a daunting environment for students who want to stay spiritually connected as they learn to navigate a world away from home and their parents.

But with a little initiative and research, students can find opportunities to deepen their relationship with God, with campus ministries that help them acquire tools to face the challenges they encounter as students.

That is one of the missions of the Rev. Richard Sloan, an Episcopal chaplain who is working with students at Columbia University and Barnard College in New York City.

“In the same way that fraternities and sororities build a community around social activities, the campus ministry builds a community of faith by getting students together in a small group to connect and build relationships,” he said.

The Episcopal Church has about 325 campus ministries across the country, including a group of about a dozen students that meet weekly with Sloan for a chapel service on Sunday evenings and for lunch and a prayer service on Thursdays.

Seeking out such opportunities of fellowship early can help students throughout their college years, said Peter Thompson, a Columbia senior from northern Virginia who is a member of the club and plans to be an Episcopal priest.

“Take advantage of resources,” Thompson said. “Know what is out there for you. You get busy, and it’s harder to keep showing up, but if you have a community, it’s easier.”

Finding a faith community was important for Betsy Wade, a Barnard College freshman from Seattle. Although she did not choose to attend Barnard for its Episcopal student group, she learned about the club online before arriving in New York and planned to join.

“Most schools have a chaplain on campus, and they are great resources for students,” she said.

During college, students are “allowed to explore and work towards something authentic. It’s about having the courage to make their faith their own and be bold enough to declare that,” said Libby, who also oversees all campus ministries in the Episcopal Church’s Province VIII.

Although many campus ministries focus on group gatherings, such as worship services, Libby has found that “individual spiritual guidance” resonates with many students at USC and UCLA.

How a campus ministry operates varies greatly from campus to campus, and it’s important that the Episcopal Church stays on top of cultural shifts and changing technologies, Libby said.

Ecumenical outreach is also vital to a campus ministry, said the Rev. Ginger Grab, an Episcopal priest and member of the interfaith chaplaincy at Bard College in the Hudson Valley of New York, which promotes exploration of various religions, including Islam, Buddhism and Judaism.

“We are providing a range of spiritual exploration, which can be a large part of the college experience,” Grab said.

Parents have to understand that it’s OK if their child questions their faith; it’s a part of the learning process, she said.

“I can’t assure them that their child will stay connected with their faith in college. Parents need to be tolerant, understanding and supportive as their child explores,” she said.

The Higher Education Research Institute at UCLA conducted a study in 2008 to assess the spirituality of undergraduate college students. The study found that although religious observance decreases during college, belief in the “spiritual” increases.

According to the report, which is based on data collected from more than 14,500 students at 136 colleges nationwide, 44 percent of the freshmen surveyed said they attend a religious service frequently. That percentage dropped to about 25 percent once they are in their junior year.

But by junior year, more than 50 percent of students said “integrating spirituality in my life” was “very important” or “essential.” That’s nearly 8 percent higher than those students in their freshmen year.

David Fierroz was baptized in the Roman Catholic Church but didn’t attend services growing up. And when he came to Columbia a few years ago from Southern California, his relationship with God wasn’t of great concern to him.

It wasn’t until his senior year when he started to reconnect spiritually after a friend invited him to attend the Episcopal chapel service on Sundays.
He and his wife, Crystal Oliva, were married by Sloan and still attend the Sunday services, even after both have graduated.
“We’ve made friends and have found community here,” he said.