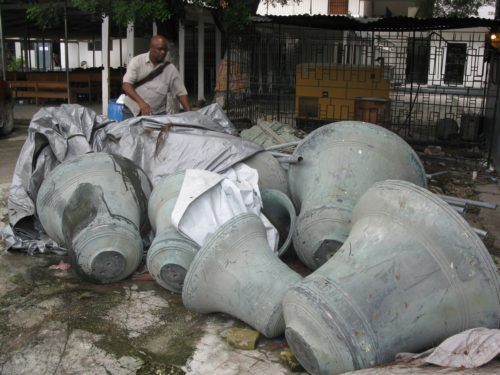 Sikhumbuzo Vundla, Diocese of Haiti’s chief of operations, surveys the bells of Holy Trinity Cathedral in Port-au-Prince, which was destroyed in the January 2010 earthquake. The temporary cathedral structure is visible behind him. Photo/Joseph Constant

[Episcopal News Service] The season of Advent in the Episcopal Diocese of Haiti is pregnant with possibilities for its Holy Trinity Cathedral in Port-au-Prince as a vision for a new building at the heart of the diocese is starting to take shape.

A request for architectural proposals is slated to be released “in the very near future,” the Rev. John A. Runkle, consulting project manager to the Rebuild Our Church in Haiti team working on cathedral reconstruction, recently told Episcopal News Service.

“The cathedral is going to be a very profound symbol of hope, of inspiration, of refuge, of stability, of returning to some positive state of being for so many people in Port-au-Prince,” said Runkle, who was appointed to the position earlier in the fall.

Runkle, who once was the conservator at Washington National Cathedral, is a licensed architect and has frequently worked on projects involving architectural and cultural landmarks.

At Haiti Bishop Jean Zaché Duracin’s request, the cathedral is to be the first major post-quake diocesan reconstruction project. The Rebuild Our Church in Haiti fundraising campaign to aid that work was formally launched on the first anniversary of the quake.

Terri Mathes of the Episcopal Church Foundation, who is managing the campaign, recently told the church’s Executive Council that the effort “has created a sense of community in dioceses and across dioceses that perhaps were not so plugged in with each other on a particular issue before.” She called the rate of participation across the church “phenomenal.”

Donald Romanik, ECF president, told the council that “this campaign has given people in the pews and in dioceses fundraising tools, raised up some leadership and has and will continue to raise dollars.” Both he and Mathes predicted that the structure and the skills that have been developed during the campaign thus far will serve the church in future endeavors, in addition to prompting a widespread conversation about funding the church’s mission and ministry.

Mathes later told ENS that the campaign is not prepared to release information about the amount of money raised.

“We’ve been advised against publishing an actual number because it poses security threats to the people working in Haiti,” she said. “Fundraising has gone very well and there is a substantial amount available to start the architectural and construction planning. We’ll need substantially more to actually finish the cathedral.”

Official rebuilding cost estimates will be based on plans submitted by the architect or architects chosen in the bidding process.

As is the case when planning to build any church, there is no dearth of ideas on what a new Episcopal cathedral in the heart of Port-au-Prince ought to encompass, Runkle said.

“Everybody has a vision, everybody has a desire to create a new cathedral and part of the hard work we’ve been doing over the past couple of months is trying to get everybody’s vision and desires harnessed and get everyone on the same page so that we are unified in how to go forward,” said Runkle. “That takes work, that takes conversation, that takes a lot of listening and being in dialogue with each other.”

Already some ideas seem clear. The building itself ought to reflect the beauty of the Haitian culture, Runkle said. In addition, the three surviving religious murals of the 14 that once filled the cathedral’s interior will be incorporated into the new design.

The world-renowned murals depicting biblical stories in Haitian motifs, crafted by some of the best-known Haitian painters of the 20th century, were added to the 1920s-era Gothic Revival-style cathedral in the late 1940s and early 1950s. Other paintings and woodcarvings also adorned the inside of the building.

Those sorts of artistic embellishments in the old cathedral were for Haitians “a form of worship – an expression of devotion to God – and definitely need to be part of the new worship space,” Runkle said. “Exactly how we’re going to do that, I don’t know.”

He said he hoped that the surviving murals are not simply displayed as museum pieces or a sort of shrine.

It will be important that the architect or architects chosen have experience working in Haiti or the Caribbean to ensure that they understand the country’s artistic culture as well as the working environment, he said, adding that there has been talk of a possible partnership between Haitian and U.S. firms.

Befitting Holy Trinity’s status as a focal point in Port-au-Prince, Runkle said, it is hoped that the new building would be able to be “a safe haven, a refuge, a place that can provide help and assistance if other things around it cannot do that” during some future emergency. The building could do that by being hurricane- and earthquake-resistant, and able to generate its own electricity, filter water and have telecommunications capability during an emergency, he suggested.

There is also the hope that the building will be environmentally sensitive. It could include as much material as possible that can be recycled from the destroyed building, use indigenous materials when possible, consider installing solar panels and investigate how to capture and use rainwater, according to Runkle. He said there are hopes the building will be environmentally sustainable and a model for new construction in Haiti.

Runkle said the word on the street is that construction in Haiti “is just going to explode in the very near future” and some are worried that “people who need the work most – the Haitian people – could get excluded” if international contractors bring in their own workers. Thus, down the road when a request for proposals for a general contractor is developed, Runkle said, he expects that it will include a requirement that Haitian laborers, skilled craftspeople and artists will be employed.

“We want to make sure that the Haitian people are building their cathedral,” he said.

In addition to all of these goals, there are three key components that must be spelled out in the architectural RFP, Runkle said. They are a legal description of the land involved; a description of the “functional needs” to be served by the building such as amount of seating in the worship space, the diocesan functions that need to be accommodated, musical requirements and meeting space needs; and what he called a realistic budget.

The Holy Trinity complex once housed Holy Trinity Music School, Holy Trinity Professional School, primary and secondary schools, and a convent of the Sisters of St. Margaret, as well as the cathedral building. Discussions are underway about temporarily relocating the schools, Runkle said, but the goal is to return them to the cathedral site. That effort, and its funding, will be separate from the cathedral construction.

The educational part of the cathedral campus is emblematic of “gospel of wholeness” that Duracin has said the diocese has preached and practiced since its founding in 1861, serving Haitians’ physical and emotional needs as well as their spiritual ones.