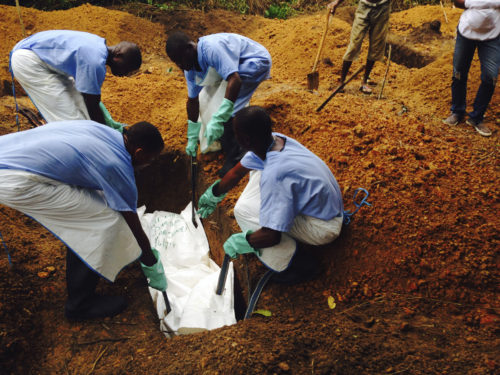 Volunteers lower a corpse, which is prepared with safe burial practices to ensure it does not pose a health risk to others and stop the chain of person-to-person transmission of Ebola, into a grave in Kailahun July 18, 2014. Hundreds of troops were deployed in Sierra Leone and Liberia on Monday to quarantine communities hit by the deadly Ebola virus, as the death toll from the worst-ever outbreak reached 887 and three new cases were reported in Nigeria. Picture taken July 18, 2014. REUTERS/WHO/Tarik Jasarevic/Handout via Reuters (SIERRA LEONE – Tags: DISASTER HEALTH TPX IMAGES OF THE DAY)

ATTENTION EDITORS – THIS PICTURE WAS PROVIDED BY A THIRD PARTY. REUTERS IS UNABLE TO INDEPENDENTLY VERIFY THE AUTHENTICITY, CONTENT, LOCATION OR DATE OF THIS IMAGE. FOR EDITORIAL USE ONLY. NOT FOR SALE FOR MARKETING OR ADVERTISING CAMPAIGNS. THIS PICTURE IS DISTRIBUTED EXACTLY AS RECEIVED BY REUTERS, AS A SERVICE TO CLIENTS – RTR41CHB