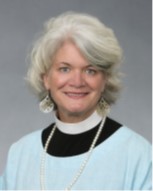 Her first day will be Sunday,, the 18th of December, when she will both preach and celebrate as Presider at both services.

She has served as Rector of St. Philip’s Episcopal Church in Jackson, Mississippi for the past 12 years.

Kyle holds an Undergraduate Degree in British History from The University of the South in Sewanee, Tennessee, and a Master of Divinity from the Seminary of the Southwest in Austin, Texas. Kyle was ordained in 1996. In addition to serving as vicar, associate rector, and interim rector at various other churches before joining St. Philip’s in 2010, she has also served as the Planned Giving Coordinator for the Diocese of Mississippi and the Executive Director of Darkness Into Day, a national capital campaign to rebuild and restore the churches and ministries in the Dioceses of Mississippi and Louisiana after Hurricane Katrina in 2005.

Kyle is a native of Tuscaloosa, Alabama, and is married to The Rt. Rev. Brian Seage. A native of Southern California, he was elected as the Bishop of Mississippi in 2014. He has recently announced plans to begin the process of calling for the election of a new bishop.

Kyle and Brian met and married in seminary and have lived in Mississippi since their ordinations. They have two young adult daughters; Katie is a 2022 graduate of Rhodes College in Memphis and is currently working at Millsaps College in Jackson. Betsy is a sophomore at Birmingham Southern College in Birmingham, Alabama.

In her personal statement to the St. Stephen’s Search Committee, she said “My call to ordination is rooted in the conviction that all people are created in the image and love of God. We are to love and find joy in one another, work together for justice and peace, take care of the world that God created for us, and worship our Lord with all our heart, soul, mind, and strength, knowing that when we succeed, and when we fail in this task, God is always with us.