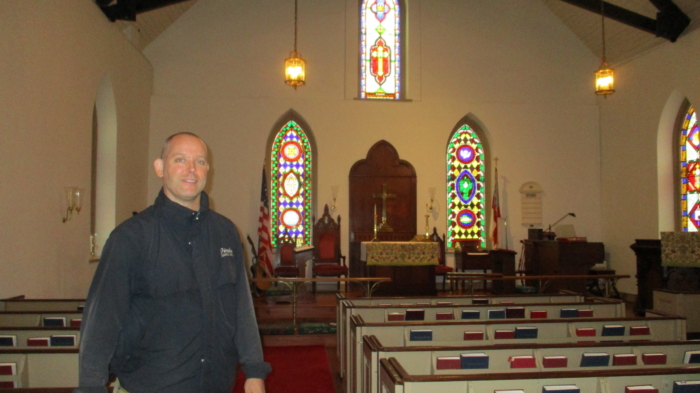 A pastor-historian from North Carolina made a long-awaited research visit to Charles County, Maryland’s Christ Church Wayside, also known as William and Mary Parish, on September 22.

Dr. Francis Kyle, a Baptist pastor and independent scholar, has been sporadically researching the Episcopalian Fitch Waterman Taylor (1803-1865) the past two decades. After twenty years of patience, his travels finally allowed him to visit the site of Taylor’s long ago pastorate while en route to Annapolis.

The Connecticut-native Taylor served as the Christ Church Wayside rector from 1831 to 1835. It was his first and only pastorate after graduating from The Lawrenceville School (N.J., five miles south of Princeton), Yale University (1828) and, after transferring from Yale Divinity School, Virginia Theological Seminary (1831) in Alexandria, Virginia. He later went on to prominence as a career chaplain in the U.S. Navy, writing books about his global sea voyages. 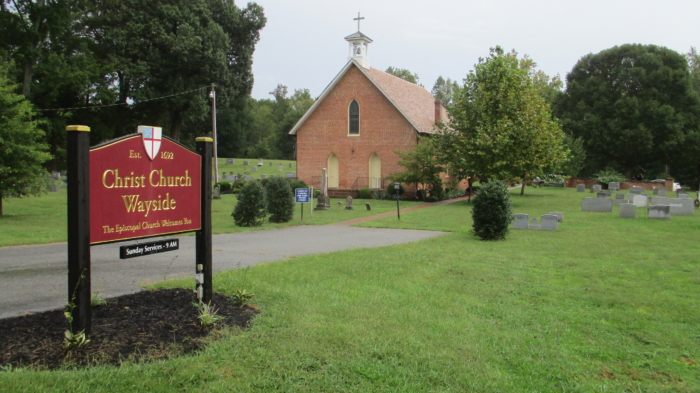 Christ Church Wayside rector Dr. Kate Heichler assisted with Kyle’s visit to the Anglican-turned-Episcopal parish that was officially formed in 1692. Located along Highway 257, at 13050 Rock Point Road in Newburg, the church’s small, Flemish bond brick building is considered the oldest public structure in Charles County. It was the boyhood church of Thomas John Claggett, the first American-born Episcopal bishop.

“What a joy to finally visit Christ Church Wayside,” Kyle states. “Although the church’s pre-Civil War documents are minimal, the visit helped this Connecticut Yankee and novice to the mid-Atlantic gain a better understanding of the geographical and historical context of the southern Maryland congregation and their beautifully preserved church building. A special thank you to Dr. Heichler and parishioner Alicia Cordelle for showing me around, and for their scheduling patience towards this North Carolina motorcyclist on a rainy Wednesday.”

In 2019 in Kansas City, Missouri, and virtually in March 2021, Kyle delivered lectures on F. W. Taylor and Connecticut’s once prominent Taylor family at the annual conference for the scholarly Nineteenth Century Studies Association. The last descendant from this particular branch of British-American Taylors that began in 1635, Prudence Taylor Palmer of Middle Haddam, Connecticut, died an only child and childless in 2003.

Among other national and regional organizations, Kyle is also a member of the American Society of Church History, National Trust for Historic Preservation and Halifax County (N.C.) Underground Railroad Advisory Committee. His book reviews and articles have appeared in the New England Journal of History and other periodicals. 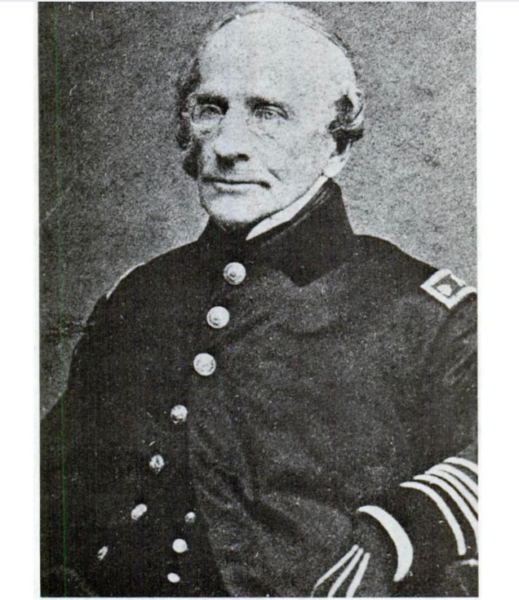 Taylor was born in 1803 in Middle Haddam, Connecticut, then a thriving shipbuilding village along the Connecticut River. He was baptized as an infant at the town’s still-standing Christ Church (est. 1785, Episcopal). (For some reason, in February 1844 in New York’s capital city of Albany, Fitch legally changed his middle name from Waterman to Welwyn.)

After pastoring Christ Church Wayside for four years and being ordained (1832) while there by the Episcopal Diocese of Maryland, the bishop commissioned Taylor to the Florida frontier. There Taylor planted a church in two boom towns: one in St. Joseph (Port St. Joe) and the other in nearby Apalachicola. The two churches helped to form the Episcopal Diocese of Florida in 1838.

Apalachicola’s Trinity Episcopal Church (est. 1836) is considered The Sunshine State’s sixth oldest church and the state’s oldest surviving church with an active congregation. It has the first prefabricated church structure in the U.S., having been prepared in White Plains, N.Y., and sent by ship in 1839. The current Trinity rector (2019- ), Eric Zile, is a Baltimore area native. While in eastern Florida this spring, Kyle visited Trinity in the historic Gulf of Mexico port town of Apalachicola.

From Connecticut to New York City when a teen, to New Jersey for secondary education, back to Connecticut for university studies at Yale, to Virginia and the Washington, D.C., metro area for Protestant theological studies, to southern Maryland to pastor Christ Church Wayside and then to Florida to plant two churches, Taylor got around. To add to these American east coast locales are the seven seas. Taylor served as a U.S. Navy chaplain for twenty-four years, from 1841 to 1865. At the time of his death he was the oldest chaplain in the navy. He served in the Mexican-American War and with the Union Army in Mississippi on the U.S.S. Hartford during the U.S. Civil War.

At the age of 62 and just shy of 100 days after Abraham Lincoln was assassinated, Fitch W. Taylor died in New York City at the Brooklyn Naval Hospital. He is buried in Brooklyn’s Green-Wood Cemetery. His 1865 obituary appeared in the New York Times and some Connecticut newspapers.

An original oil portrait of Taylor–and that of his parents and some siblings–are housed at the Connecticut River Museum in Essex, Conn. And the U.S. Navy archives has a photograph of Taylor in his Civil War-era chaplain uniform. The same photograph appears in Sea Padres: Some Chaplains of “the Old Navy,” published by the navy in 1984.

Professionally stored in a variety of ecclesiastical, naval and university libraries are some of Taylor’s manuscripts, books and patriotic poems. Among these are his A Voyage Around the World, and visits to various foreign countries, in the United States frigate Columbia. Published soon after the 772-day, May 1838 to June 1840 naval expedition that sailed nearly 50,000 miles and crossed the equator five times, the popular two-volume memoir/travelogue saw many subsequent editions. The voyage was one of the first U.S. Navy ships to circumnavigate the globe and was part of the U.S. Exploring Expedition of 1838-42.

Kyle first became aware of Fitch W. Taylor in 2000. At the time, he was beginning his research on Fitch’s more popular younger brother, James Brainerd Taylor (1801-1829).

Though raised Episcopal in Connecticut, J. B. Taylor transferred to Presbyterianism in New York City while employed there as a teen. He was a Class of 1823 member of The Lawrenceville School (N.J.) and Class of 1826 member of Princeton University. While at Princeton he was the primary founder of what is now known today as the Princeton Christian Fellowship campus ministry. While a student at Yale Divinity School, J. B. Taylor received his ministerial license to preach as an evangelist from the Congregational Church of Connecticut.

With failing health due to tuberculosis, J. B. Taylor died just shy of twenty-eight years old while “snow birding” it at Union Seminary in the warmer winter climate of central Virginia. He is buried at the Hampden-Sydney College Presbyterian Church cemetery near Farmville, Virg. At the time (1829), Union was on the campus of Hampden-Sydney College. It moved to Richmond in 1898.

Both James B. Taylor and Fitch W. Taylor have an entry in Appletons’ Cyclopedia of American Biography (1887-89) and the ten-volume Cyclopedia of Biblical, Theological, and Ecclesiastical Literature (1867-81). Among a host of other published and unpublished sources, additional biographical information on the two brothers is found in Sketches of the Religious Experience and Labors of a Layman, an 1860 work published by their older brother and Episcopalian lay leader, Jeremiah H. Taylor (1797-1882).

It is worth noting that the Taylor brothers–including the eldest and wealthiest brother Knowles Taylor (1795-1850), the primary benefactor who helped form Union Seminary in New York City and Union Seminary in Virginia–had as their maternal cousin (four times removed) the famed First Great Awakening missionary to the Native Americans, David Brainerd (1718-1747). And they were likely paternal collateral descendants of Jeremy Taylor (1613-1667), the Church of England cleric-author-poet who is sometimes known as the “Shakespeare of Divines” or the “C.S. Lewis of the 17th Century.”

For more information on or to contact Christ Church Wayside, go online to christchurchwayside.com. For Kyle, visit franciskyle.com.