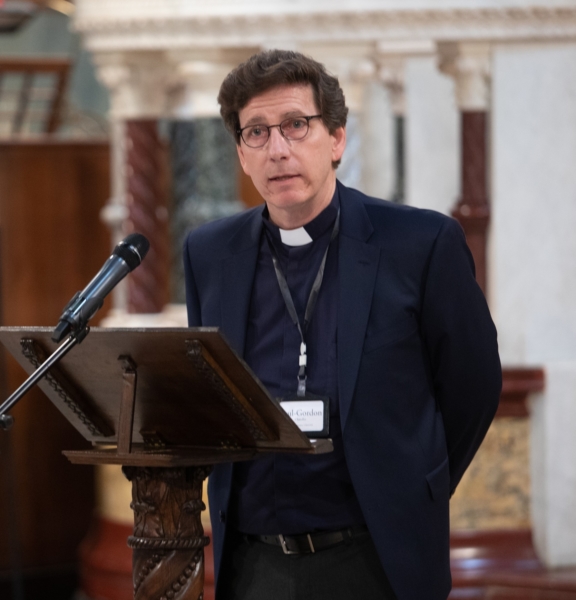 The Rev. Paul-Gordon Chandler speaking at St. Paul’s Within the Walls Episcopal Church in Rome in May 2019.

The Rev. Canon Paul-Gordon Chandler, a mission partner with The Episcopal Church since 2003 and currently the President/CEO of CARAVAN, a peacebuilding non-profit affiliated with The Episcopal Church that uses the arts to build sustainable peace around the world, is to become the next Senior Anglican Priest of The Church of the Epiphany (The Anglican Centre) in Doha, Qatar, within the Anglican Diocese of Cyprus and the Gulf, whose bishop is The Rt. Rev. Michael Lewis. Chandler is scheduled to begin in Doha, Qatar in November 2019.

The Church of the Epiphany is at the heart of The Anglican Centre in Qatar, which is the spiritual home for more than 85 Christian congregations and groups who worship in Qatar and includes approximately 15,000 worshipers from 63 countries every weekend. In addition to the church sanctuary used by The Church of the Epiphany, The Anglican Centre has 26 different halls used for worship. A diverse and multicultural community of many nationalities, Church of the Epiphany holds worship services in English, Tamil, and Igbo. The Anglican Centre in Qatar was built with the kind permission of His Highness The Emir Sheikh Hamad Bin Khalifa Al Thani, the Emir of Qatar, who authorized the leasing of land for the country’s first Christian churches since the seventh century in this Gulf country.

Remarking on Chandler’s appointment, The Rev. David Copley, The Episcopal Church’s Director of Global Partnerships and Mission Personnel, said: “We are excited about being able to continue our support for Paul-Gordon as a mission partner. His gifts, talents, and experience make him ideally suited to this ministry. We wish Paul-Gordon every blessing as he begins this new chapter in his journey.”

Bishop Lewis of Cyprus and the Gulf said, “We greatly look forward to welcoming Paul-Gordon among us. The task at the Epiphany is challenging and stimulating. His known gifts of imagination and clarity are just what the local and wider Church needs.”

As an Episcopal Church Mission Partner, from 2003-2013, Chandler served as the Rector of St. John’s Episcopal Church in Cairo, Egypt, an international congregation of over 35 nationalities and 45 church traditions, and a strategic center for Christian-Muslim relations. Growing out of the peacebuilding work in Cairo, he founded CARAVAN, which has become a global leader in using the arts to enhance understanding, bring about respect, enable sharing, and facilitate friendship between diverse peoples, cultures and faiths, with a special focus on the creeds and cultures of the Middle East and West.

CARAVAN’s newest peacebuilding exhibition, titled “ABRAHAM: Out of One, Many,” currently on tour to Episcopal cathedrals until mid-2021, is a timely artistic exploration on living harmoniously, inspired by Abraham, the common ancestor of three celebrated contemporary artists of Middle Eastern heritage from Muslim, Christian, and Jewish traditions. The exhibition’s next showing opens at The Cathedral Church of St. Paul in Boston, MA on October 27 at 4pm.

Qatar, located on a peninsula on the northeastern coast of the Arabian Peninsula, and surrounded on three sides by the Persian Gulf, plays a strategic role in the Arab world. In 2022, Qatar will be hosting the FIFA World Cup.