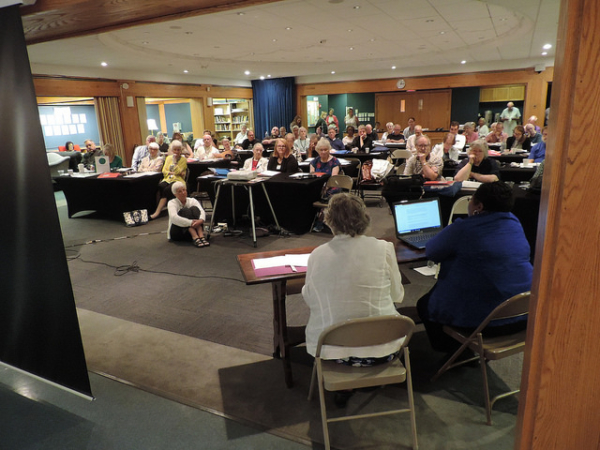 Gathered in the parish hall of the first gothic style church in North America, over 70 individuals came together for the 2018 National Episcopal Historians and Archivists (NEHA) Conference, “In Remembrance of Thee: The History of Reconciliation in the Episcopal Church,” Wednesday, August 8 – Friday, August 10. They came from all corners of the United States as well as Canada and Australia. The folks at Trinity on the Green in New Haven opened their doors and hearts for all interested in the wide gamut of topics under a thematic umbrella covered in three days.

The conference consisted of five panels of paper presentations: Survival of the Archival; Conflict Afoot in the Period of our New Republic; Roiling Waters out of Reconstruction; Knowledge from Beyond North America; and Here and Now: Going Forward. Papers focused on larger topics such as Church Archives 101, sustaining church records in a rural parish, and the Episcopal Church’s role in enabling slavery, to more focused papers on specific individuals such as Peter Fassoux Stevens, William Huntington, and Anna Julia Cooper. Some papers reflected the context of this conference, choosing to focus on post-Revolutionary Connecticut and even the role of the 1700s rector of Trinity New Haven’s in the development of St. Luke’s in New Haven as the fourth “Black” Episcopal Church in the U.S. Each paper brought new light and insights to this crowd of history and archive enthusiasts, many of whom with a pen and notebook in hand were eagerly taking notes. Behind the panelists was an installment on the church’s participation in Racism, entitled “Racism: the Worm in the Apple” by The Center for Reconciliation.

Each day, conference attendees were welcomed into the side chapel of Trinity for morning prayer and a delicious breakfast hosted by the parishioners of Trinity.

The first day included three panels, and a presentation by the Rev. Canon C.K. Robertson, Canon to the Presiding Bishop of The Episcopal Church, focused on conflict management, offering a unique way to look at the development of conflict and concrete steps to establish guidelines and boundaries for when conflict arises. Attendees enjoyed a Middle Eastern dinner by Sanctuary Kitchen, a local program of City Seed and IRIS (Integrated Refugee & Immigrant Services). After dinner the Trinity Players, a liturgical and teaching drama team based in Trinity, New Haven, performed The Balance,a play about the Rev. Harry Croswell, rector of Trinity 1815-1858 and founder of Washington College, later renamed Trinity College, Hartford.

Day two started with a panel of presenters and the National Episcopal Historian and Archivists’ Annual Meeting. The afternoon on day two was filled with tours of four predominant locations in New Haven. The first stop was an interactive tour of the Grove Street Cemetery, the first chartered burial grounds laid out in avenues and family plots in the United States. Conference attendees were in for a “fanciful visit” from their “friends in low places,” as tour title reflected, hearing biographies portrayed by notable individuals such as the Rev. Harry Croswell (1778-1858), Eli Whitney (1765-1825), Martha Townsend (1753-1797), and Noah Webster (1758-1843) to name a few. The second stop was the recently built Pauli Murray Residential College at Yale, named after the first African-American woman ordained to the priesthood in the Episcopal Church and first African-American woman to receive a J.S.D. degree from Yale Law School. The third stop was to Berkeley Divinity School at Yale Divinity School. The tour specifically focused on the library and newly installed exhibit about Berkeley Divinity School, including a 1950’s time capsule found at the old location of Berkeley (the new location of Pauli Murray College). The fourth and final stop was back at Trinity, where conference coordinator, architect, and history enthusiast Margaret (Peg) Chambers gave a quick lecture on the history of Trinity on the Green and its architect, Ithiel Town. The afternoon concluded with a Taizé Eucharist.

Thursday evening’s reception and banquet was hosted at the Graduate Club at Yale on the New Haven Green, and included a concert from St. Luke’s Steel Drum Band, New Haven, and a keynote address by Barbara Lau, Director of the Pauli Murray Project at the Duke University Human Rights Center, on the life and work of Pauli Murray. Lau walked through the family history of Pauli Murray, her work as an activist, her time in law school, and her call to and work within the priesthood. The presentation also focused on the work of the Pauli Murray Project, particularly the restoration project of Pauli Murray’s childhood home, which will become a center for history and social justice, and will open in 2020. A former classmate of Pauli Murray, attending as a conference attendee, offered some fond memories of his time with her in seminary during the post-presentation discussion.

The final morning of the conference included a panel of presenters, and an open time for group discussion and shared conversation. Susan Stonesifer, President of NEHA, reported that Nell Braxton Gibson, Board Member of the Episcopal Urban Caucus, and social activist and author, discussed her experience as a member of the Black and Brown Caucus at St. Mark’s in the Bowery. Dr. Joanne Pope Melish, member of the Coordinating Committee of the Center for Reconciliation, Episcopal Diocese of Rhode Island spoke of the ongoing ownership of enslaved people in the New England, well into the 19th century. And the Rev. Dr. John Rawlinson, Archivist of the Diocese of California discussed the history of the rite of reconciliation and penitence within the Episcopal Church. This conversation really epitomized the need for these conversations to happen within our church, our community, and our world.

A Tri-History Conference, co-sponsored by the Episcopal Women’s History Project, Historical Society of the Episcopal Church and the National Episcopal Historians and Archivists, will be held June 18-21, 2019 in Toronto. Entitled “Trauma and Survival in the Contemporary Church: Historical, Archival, and Missional,” it will be held in partnership with the Faculty of Divinity of Trinity College and Wycliffe College (both in the University of Toronto) and the Canadian Church Historical Society (a co-operator with the General Synod Archives of the Anglican Church of Canada). Papers and proposals are now being collected and can be submitted through the 2019 Conference website: http://www.trihistory.org/2019.

You can find more information about National Episcopal Historian and Archivists on their website at www.episcopalhistorians.org.