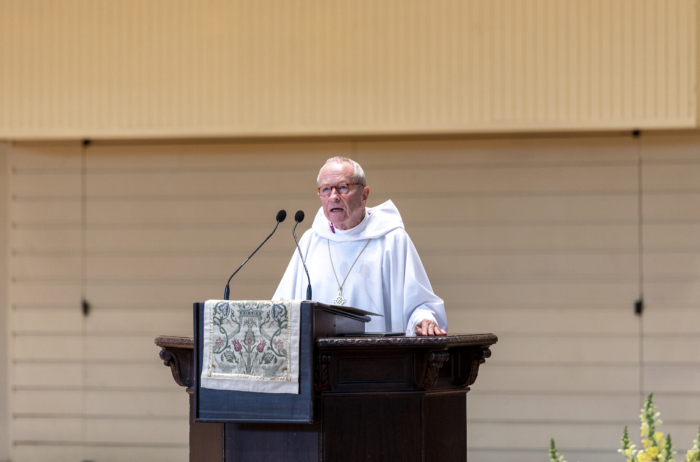 Chautauqua Institution today announced the retirement of the Rt. Rev. V. Gene Robinson as Vice President of Religion and Senior Pastor, effective Dec. 31. Details of a national search for his successors in both roles will be shared shortly.

Robinson joined the Institution staff in 2017, following a career in Episcopal Church leadership that culminated with service as bishop of the Diocese of New Hampshire. An internationally recognized interfaith leader and former fellow of the Center for American Progress, he continues to serve as a Senior Fellow at Auburn Seminary. Robinson is an outspoken advocate for the rights of marginalized populations, recognized for his groundbreaking work with the LGBTQ community, youth communities and those suffering from abuse and addiction. No stranger to Chautauqua, he had previously served as a popular and thought-provoking lecturer and as Chaplain of the Week during the 2011 Summer Assembly.

“Gene has contributed so much to the spiritual and programmatic life of Chautauqua, both as a guest of our platforms and through his stewardship of our Religion pillar — a legacy that includes the very founding of the Institution as the Chautauqua Lake Sunday School Assembly in 1874,” said Michael E. Hill, President of Chautauqua Institution. “While sad we will no longer benefit daily from his wise and steady leadership, we wish him a happy and healthy retirement and know he will continue to be a deeply valued friend to Chautauqua.”

Robinson’s tenure at Chautauqua has resulted in some of the Department of Religion’s most popular new initiatives, alongside the continued popularity of Sunday worship — which he affectionately refers to as “Big Church” — and the daily ecumenical devotional service in the Amphitheater, and the Interfaith Lecture Series in the Hall of Philosophy. Robinson was responsible for the launch of Interfaith Fridays, in which he engaged leaders across the religious spectrum in a series of conversations, each guest tackling the same question from their particular faith’s perspective. He also established a new tradition of inviting a rabbi to serve as chaplain for one week each summer, providing a unique opportunity for prominent Jewish leaders and Chautauqua parishioners.

Under Robinson’s leadership, the Interfaith Lecture Series continued to build on a legacy as one of the most diverse and renowned platforms for exploration of theological, religious, spiritual, ethical and humanitarian matters. Lecturers featured during Robinson’s tenure included Bryan Stevenson, the Rev. Barbara Brown Taylor, Heather McGhee, Eboo Patel, Jeremy Ben-Ami, and weeklong series in partnership with Fr. Richard Rohr, journalist James Fallows and the late Episcopal Bishop of Newark John Shelby Spong, who delivered his final public address at Chautauqua in 2018.

Robinson also guided the Chautauqua community through the tragic and sudden loss of its beloved longtime organist, Jared Jacobsen. That healing process has included the appointment of celebrated organist Joshua Stafford, a Jacobsen student, as his successor.

“What an honor to have been a part of this place and people, steeped in history and tradition, but also open to change and willing to learn,” Robinson said. “Helping shepherd us through a pandemic, a contentious election, and a national racial awakening has made this work challenging and oh-so-rewarding.

“I’m brimming with gratitude for the many gifts this blessed place and community have introduced into my life. While I am leaving Chautauqua in a formal capacity, nothing can take Chautauqua out of my heart.”

Prior to Chautauqua, Robinson was elected Episcopal Bishop of New Hampshire on June 7, 2003, becoming the first openly gay and partnered priest to be elected Bishop in historic Christendom. He served as IX Bishop of New Hampshire until his retirement in early 2013. His ministry has focused on helping congregations and clergy, especially in times of conflict, utilizing his skills in congregational dynamics, conflict resolution and mediation. He is the author of In the Eye of the Storm: Swept to the Center by God (Morehouse, 2006) and God Believes in Love: Straight Talk about Gay Marriage (Knopf, 2012). In addition to being a popular speaker in the U.S. and abroad, he has written opinion columns on a variety of topics for The Daily Beast, Huffington Post and Time.com.

In 2009, Barack Obama invited Robinson to pray the invocation at the opening Inaugural Ceremonies and Concert at the Lincoln Memorial. In 2018, he had the honor of presiding over the interment of Matthew Shepard at the Washington National Cathedral.

ABOUT CHAUTAUQUA INSTITUTION
Chautauqua Institution is a community on the shores of Chautauqua Lake in southwestern New York state that comes alive each summer — and year-round through the CHQ Assembly online platforms — with a unique mix of fine and performing arts, lectures, interfaith worship and programs, and recreational activities. As a community, we celebrate, encourage and study the arts and treat them as integral to all of learning, and we convene the critical conversations of the day to advance understanding through engaged dialogue.