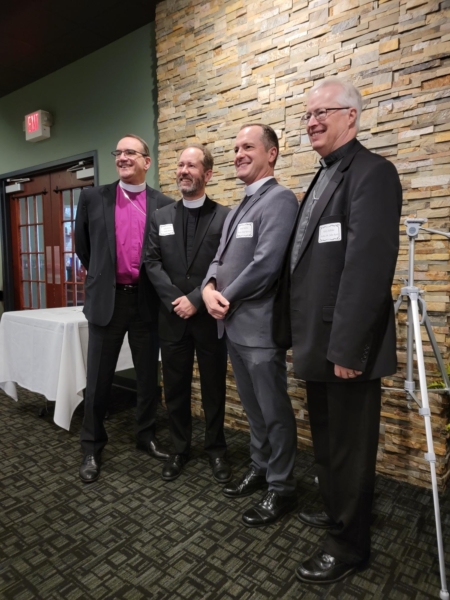 A spirit of celebration reigned Saturday morning, Nov. 5, as the congregations of St. George’s Episcopal Church and St. Mark Lutheran Church gathered to mark the 40th year of a relationship in which they have shared buildings – and a great deal more – in downtown Belleville, Illinois.

The St. Mark-St. George’s relationship is the longest such partnership, many times over, in either the Episcopal or Lutheran churches.

The Rt. Rev. Brian Burgess, bishop of the Episcopal Diocese of Springfield, and the Rev. Dr. S. John Roth, bishop of the Central/Southern Illinois Synod of the Evangelical Church in America, were both on hand to help celebrate this Ruby Jubilee.

The observance began with a service at 10:30. Burgess was celebrant at the Eucharist service, and Roth preached. The two churches’ choirs joined in leading the music. St. Mark’s handbell choir provided the prelude. Youth and adult members of both parishes read lessons, led prayers, and served as acolytes.

In his sermon, Roth stressed that “we are not here this morning to congratulate ourselves for the level of Christian unity that St. Mark and St. George’s have achieved over 40 years.  Rather, we are here this morning in gratitude to God for the blessing it has been– in this particular context, in this particular arrangement – to be co-citizens with the saints and household of God.”

After the service, Lutherans and Episcopalians attended a festive luncheon at Bella Milano restaurant, O’Fallon. Following lunch, the Rev. Ron Neustadt, who served 34 years at St. Mark until his 2010 retirement, as well as the Rev. Brian Robison, his successor, and the Very Rev. Mark Ohlemeier, priest in charge at St. George’s, all spoke about the profound importance of this long, rich relationship, and how much both Episcopalians and Lutherans have learned about Christian unity through it.

The story began in 1982, when St. Mark, a young congregation of the American Evangelical Lutheran Church then meeting in the nearby Belleville Philharmonic Hall, needed a place for its offices and Christian education. St. George’s then-Rector Hewitt Johnston welcomed them to the Episcopal campus. Within a year the Lutherans had moved their Sunday services to St. George’s as well, with Episcopalians worshipping at 8 and 10:30 am and the Lutherans at 9 am. Christian education for Episcopalians is at 9:15 am, for the Lutherans at 10:30.

Both parishes quickly learned the wonderful possibilities of sharing the space. They opened a food pantry, staffed by volunteers from both congregations and still in operation today, which serves hundreds of needy families in Belleville. A Meals on Wheels team includes Lutheran and Episcopal volunteers. At various times the churches have combined for Lenten studies and other educational opportunities. The Altar Guilds work closely together, and members of both congregations turn out for work days to rake leaves, wash windows and tend to other maintenance chores.

St. Mark and St. George’s worship together, under terms of the Called to Common Mission agreement adopted by the two national churches, on Ash Wednesday, Good Friday, Ascension Thursday and Christmas Day.

The clergy in these one-pastor congregations appreciate having a clergy colleague at hand, and often stand in for each other in hospital visits. During various periods of clergy vacancy at St. George’s, the Lutheran pastors have been extraordinarily generous in supplying at St. George’s. The office staff backstop one another and often help each other work through ever-vexing tech issues. The directors of music collaborate and substitute for each other as needed.

Four years ago, the two parishes decided to establish a Joint Task Force to oversee property management and improvements. This diligent team has effected some major improvements to the physical plant, including new storage areas and a new bathroom, and has transformed the buildings and grounds, correcting years of deferred maintenance and some neglect.

Most recently, the two parishes have decided to publish a shared pictorial directory. Each congregation will have its own section, but the two will be joined in a spiral binding. This innovation seems an altogether fitting sign of the growing unity and mission shared by St. Mark and St. George’s.