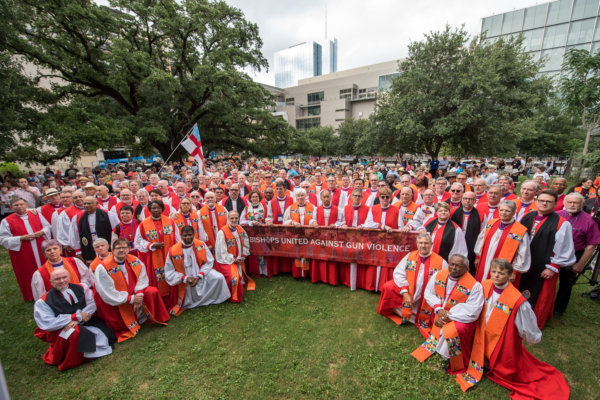 Bishops United Against Gun Violence, a network of more than 80 Episcopal bishops working to curtail the epidemic of gun violence in the United States, has named Bishop Daniel G. P. Gutiérrez of Pennsylvania and Bishop Steven Miller of Milwaukee as new co-conveners. They join Bishop Ian Douglas who has served as co-convener since the group’s founding in 2013.

Gutiérrez and Miller succeed co-conveners Bishop Mark Beckwith, who retired as bishop of Newark earlier this year, and Bishop Eugene Sutton of Maryland. Sutton will continue his work with Bishops United by helping to lead the group’s public events and witnesses, and Beckwith is discerning a role as Bishops United liaison to civic and faith-based groups that share the network’s commitment to gun violence prevention.

“I am grateful to Steven and Daniel for agreeing to join me in convening Bishops United and to Mark and Eugene for their willingness to assume new leadership positions that will expand our reach and effectiveness,” said Douglas. “Together we will continue our witness to the God of life who, even in the face of death, calls our church to speak and act decisively against the unholy trinity of poverty, racism and violence.”

Founded after the 2012 Oak Creek Sikh Temple shooting in the Diocese of Milwaukee, where Miller serves, and the Sandy Hook Elementary School shooting in the Diocese of Connecticut, where Douglas serves, Bishops United offers public liturgy to commemorate victims of gun violence, spiritual support to survivors and their loved ones, teaching on the Christian ethics of gun violence issues, and advocacy for common sense gun safety measures. Most recently, the group held daily prayer services and a public witness that drew hundreds at the Episcopal Church’s General Convention in July and sponsored three convention resolutions, including one that calls on Episcopal dioceses, church organizations and individuals to invest in gun companies in order to practice shareholder advocacy. After thirteen people died in a shooting at a bar in Thousand Oaks, California, last month, the group published a litany for use in the wake of a mass shooting.

“As a founding member of Bishops United, I am pleased to have the opportunity to lead,” said Miller. “I helped to start the network in the aftermath of the shooting at the Sikh temple in Oak Creek, Wisconsin, and working to end gun violence has been a central part of my episcopal ministry.”

“Gun violence prevention strikes very close to my heart,” said Gutiérrez, a native of New Mexico who joined the network in 2016 when he was ordained a bishop. “Living in Philadelphia, I see the scourge of urban gun violence in our community, and as a native of the West with family members who are in the military and serve as police officers, I have a particular perspective to offer on this issue.”

With its new leadership team, Bishops United Against Gun Violence continues its commitment to overcoming the epidemic of gun violence in our nation through education, advocacy and public witness. To learn more about the network, visit bishopsagainstgunviolence.org and follow Episcopalians Against Gun Violence on Facebook and The Cross Lobby on Twitter.