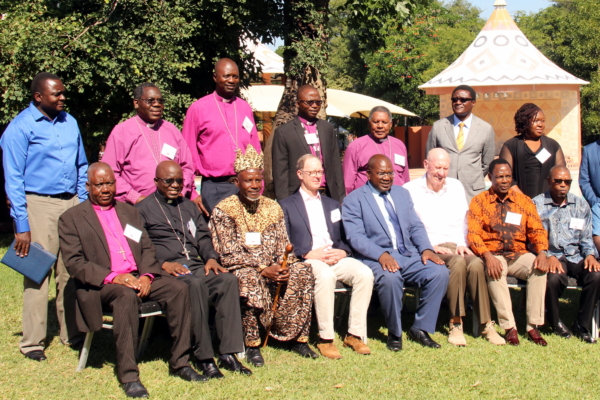 Anglican clergy gathered in Livingstone, Zambia on 28 February and 1 March at the Isdell:Flowers Cross Border Malaria Initiative’s annual Round Table to discuss the important role of faith communities in malaria elimination. The Honourable Dr. Chitalu Chilufya, the Minister of Health of Zambia, formally opened the meeting and joined the clergy in their support for increased community and church engagement.

“It is our role as a church to be involved in health-related matters,” said the Most Reverend Albert Chama, Archbishop of the Church of the Province of Central Africa. “When we talk about the healing of people, it is not only spiritual but also physically that they are healed…We need to take a front seat so that we can be able to inform people the dangers of malaria, so that it can be prevented.”

There has been significant advancement towards malaria elimination over the past 15 years: the number of malaria deaths has been cut nearly in half since 2004 (from more than 790,000 in 2004 to about 435,000 in 2017), and 37 countries that previously had malaria are now malaria-free. However, 3 billion people live in places that are still at risk of malaria.

The church is active in these malaria endemic areas and is playing a crucial role in working towards elimination. Faith leaders joined together at the Round Table in their belief that eliminating malaria in Southern Africa is a real possibility, but not without participation of the most vital members of the fight against malaria – community members themselves.

Throughout the Round Table meeting, Anglican clergy emphasized the importance of interfaith partnership to reduce deaths and suffering caused by malaria.

Canon Grace Kaiso, Executive Director of the Council of Anglican Provinces of Africa said, “It is important for us all to come together because it implies that we have a common enemy [malaria]. And this enemy can be fought by different faiths, but on the same platform. It is about humanity. It is unity, despite our different beliefs in faith.”

Chris Flowers, Founder of the J.C. Flowers Foundation and Co-Founder of the Isdell:Flowers Cross Border Malaria Initiative, echoed the importance of collaboration in saying, “we will only conquer malaria if we all do our part and work together.”

Chama and Kaiso explained that the church plays a role in deploying its extensive infrastructure and networks to help disseminate accurate information and teach life-saving skills on how to prevent and deal with malaria—including in places that are beyond the reach of most NGO and even government services, but which have an Anglican congregation.

Archbishop Chama recognized that communities cannot act alone. Reflecting on the scientific malaria facts that were shared at the Round Table, he explained, “the Church should take the scientific data seriously…because now we can do things from an informed perspective. We can inform people using real evidence on the ground.”

He reminded us that God has given us all different abilities so that we can put ourselves together and create a solution. Jesus prayed that we may be one, and we can respond by working together and engaging our communities on the path towards malaria elimination.

The Mother’s Union from St Andrew’s Parish in Livingstone, Zambia closed the gathering by singing songs they had composed about malaria prevention.