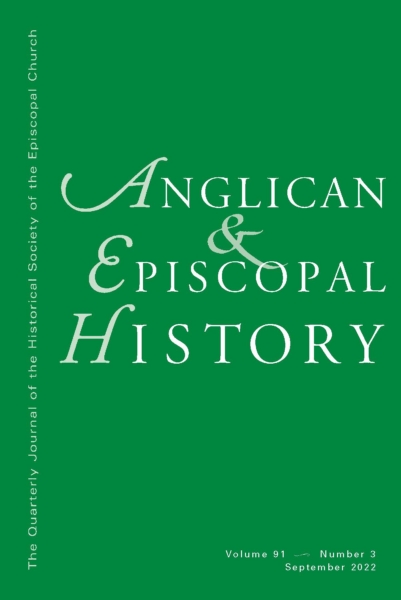 “The Episcopal Church was born in a racialized context visible to the Black population of the early republic,” writes D.A. Dunkley. He invites readers to recontextualize celebrated priest Absalom Jones within the Black freedom struggle and culture of Black enslaved people to understand better the influences on Jones’ leadership and ministry shaping the Episcopal Church and becoming its first Black American priest in 1802.

The study is titled, “Black Radicalism in the Episcopal Church: Absalom Jones and Slave Resistance, 1746-1818.” Dunkley is associate professor of history and chair of Black Studies at the University of Missouri-Columbia.

In the final essay, William Brown Patterson examines the Royal Society formed under King Charles II. “Religionists of a broad range of backgrounds were attracted to and welcomed by the membership in the years that followed [its founding in 1663]” and that “Faith and reason were thus joined in a cultural revolution in the early years of the [monarchy’s] Restoration.”

The essay is titled, “Religion and the Royal Society in Early Restoration England.” Patterson is professor of history emeritus at Sewanee: The University of the South.

Other church reviews include Ash Wednesday at St. Edward the Confessor in Lugano, Switzerland, and the Easter Triduum at St. Margaret’s Anglican-Episcopal Church in Budapest, Hungary. Both churches are part of the Church of England’s Diocese in Europe.

About Anglican and Episcopal History

Anglican and Episcopal History (ISSN 0896-8039), formerly The Historical Magazine of the Protestant Episcopal Church, seeks to raise the level of discussion, provide a forum for exchange of ideas, and review books of real worth and of interest to educated Anglicans. It is published quarterly in March, June, September, and December. Full text articles are available through JSTOR.org and for members of the Historical Society of the Episcopal Church at hsec.us/AEH.